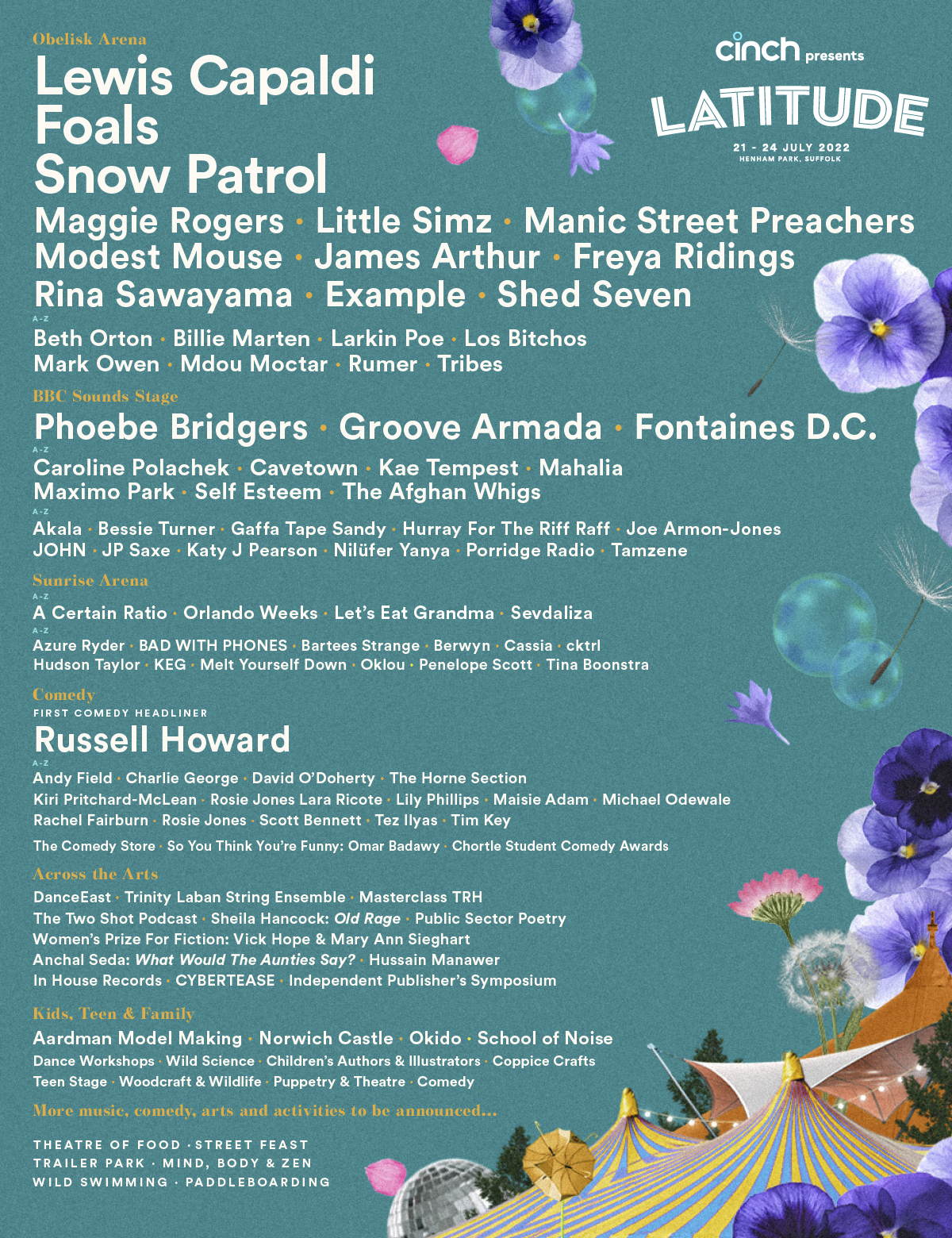 LATITUDE FESTIVAL ANNOUNCES FIRST ROUND OF ACTS FOR 2022

Famed for cultivating artists, cinch presents Latitude is proud to welcome Foals back as headliners. The band played their first ever headline festival slot at Latitude way back in 2013 following a 2008 slot. Foal’s forthcoming album Life Is Yours  is made for a euphoric hot summer.  Recent single 2am is a  joyous, dance-tinged track and  follows the triumphant and upbeat Wake Me Up. The forthcoming album is the follow-up to the band’s ambitious Everything Not Saved Will Be Lost. Released in two parts in 2019, it took Foals to new heights as they claimed their first UK #1 album and took home the BRIT Award for Best Group.  Latitude’s idyllic setting combined with Foal’s  atmospheric and dance-infused new music, will result in one of the many unforgettable experiences of the weekend.

Foals said, “We’re honoured & thrilled to be headlining Latitude this year. It’s especially significant to us as our first ever festival headline set was at Latitude almost ten years ago and we remember the rush of that show like it’s today; it  felt like being handed the controls to a jumbo jet at 35k feet…Latitude helped us and many other great UK bands realise their potential. We couldn’t be happier to come back on the Saturday night to remind everyone & ourselves how powerful & euphoric live music can be.”

Double BRIT Award winner Lewis Capaldi makes his cinch presents Latitude debut as one of the UK’s biggest music success stories. Divinely Uninspired to a Hellish Extent was the top-selling album of 2019 and 2020, breaking the record for the most consecutive weeks in the chart for any solo artist. The album became gold-certified one week after release, and still holds the record for the most-streamed week 1 debut album. The album spawned such singles as Grace, Hold Me While You Wait, and Someone You Loved, which topped the charts in the US and the UK. It also earned Capaldi accolades on both sides of the Atlantic, including two BRIT awards and a Grammy nomination. A festival superstar, his live performances are legendary and, with the possible premiere of brand new material from his highly anticipated second album, this is going to be unmissable!!

Snow Patrol also make a momentous return to cinch presents Latitude. The band who headlined the inaugural Latitude back in 2006,  were forced to cancel their headline slot at Latitude in 2019 due to illness and a special guest slot again in 2021 due to COVID. This much-anticipated performance will celebrate over 2 decades in the business. Expect festival-sized anthems with hits such as Crack The Shutters, Run, and Chasing Cars.

Snow Patrol said, “We are so delighted to be back playing Latitude once again. We headlined the very first one in 2006 and we’re so honoured to be asked to headline once again. It’s one of the best festivals in the UK and we can’t wait. Lots of love from Snow Patrol”

Renowned for booking an exceptional array of musical talent, this year’s cinch presents Latitude takes it up a notch yet again.  On the BBC Sounds stage, indie-rock original Phoebe Bridgers headlines in a UK festival exclusive. Bridgers’ dreamy and hook-filled indie is perfect for Latitude, expect gems from her acclaimed Grammy-nominated 2020 album Punisher plus a whole lot more. Across the weekend, the thunderous and apocalyptic Fontaines D.C. will perform highly anticipated third album Skinty Fia and hit-making dance duo Groove Armada present their landmark live show marking a stellar 25 year career that spawned top 10 hits like At The River, Superstylin’ and I See You Baby.

In yet another festival exclusive, the endlessly empowering Maggie Rogers will perform tracks from her eagerly anticipated second album which she describes as ‘grunge disco songwriter chic’. Across the weekend, the breakout star of  The Brit Awards 2022, Little Simz performs tracks from her iconic album Sometimes I Might Be Introvert, Modest Mouse return to the festival in support of  latest album, The Golden Casket and Maccabees frontman Orlando Weeks  performs tracks from his sunny, infectious and uplifting solo album Hop Up.  Singer-songwriter James Arthur also makes his Latitude debut playing tracks from acclaimed new album It’ll All Make Sense In The End, alongside his classic hit singles and fan favourites.

Latitude’s arts line up is second to none and this year’s comedy bill will be  bigger than ever. Taking the first  headline slot on the Comedy Arena stage is Russell Howard, who stops off at Henham Park fresh from his record breaking world tour. Howard is one of the UK’s most successful comedians. Now in its fifth series, The Russell Howard Hour has had over 400 million views across social media and was the most successful new entertainment series to launch on Sky One since 2010, whilst Russell Howard’s Good News was BBC Three’s best-performing entertainment show and received a new home on BBC Two for its ninth and tenth seasons, where it averaged over 3 million viewers per episode. Since the global lockdown Russell has been at the forefront of the live comedy scene, becoming the first stand-up comedian from the Northern Hemisphere to perform in New Zealand and Australia and to open the doors at London’s iconic Hammersmith Apollo with a five-night run as part of his third and biggest world tour.

Russell Howard said, “Can’t wait to headline Latitude. Such a brilliant festival and always has an excellent range of music and comedy.”

Among the first comedy acts announced today is multi-award-winning comedian and poet Tim Key who will perform his  acclaimed lyrical sell-out show Mulberry. The unapologetically funny comedian, writer, actor and broadcaster Rosie Jones will also return to Henham Park, as will irreverent Dublin comedian David O Doherty, while Taskmaster’s Alex Horne is getting the band together and bringing musical comedy act The Horne Section to the Comedy stage. Also announced today is multi-award-winning comedian Kiri Pritchard-McLean (Have I Got News For You, Live at the Apollo) and recent winner of the Funny Women Stage Award, Lara Ricote.

Following a storming first Latitude appearance last summer, co-star of the Brew with the Bennetts podcast Scott Bennett returns to the Comedy Arena, as does star of cult-hit satirical series The Tez O’Clock Show and Man like Mobeen and author Secret Diary of a British Muslim Aged 13 ¾, Tez Ilyas. Elsewhere on the site, expect performances from surreal storyteller and star of his own BBC Radio 1 series Andy Field and LGBTQ New Comedian of the Year 2019 Charlie George. In a brand new ongoing partnership with the UK’s longest-running new comedy contest, So You Think You are Funny, cinch presents Latitude will also showcase 2021 winner Omar Badawy. Latitude will once again play host to the Chortle Student Comedy Award finalists and The Comedy Store makes a welcome return.

Across the festival, the cinch presents Latitude bill showcases dance in all its most exciting guises with an unrivalled range of  shows. The stunning Waterfront is globally renowned for showcasing the best talent in dance productions and companies. This year, the festival continues with its powerful partnership as Dance East return to the Waterfront Stage to present a diverse programme of world-class dance in all its forms

cinch presents Latitude attendees can expect cultural visionaries, poets, podcasters, and performance artists in an arts bill without boundaries with some outstanding talent announced today. Women’s Prize for Fiction returns to Latitude for a sixth year, with an amazing set of literary events featuring inspiring broadcaster Vick Hope and author of the best-seller The Authority Gap, Mary Ann Sieghart.  One of Britain’s best loved actors Dame Sheila Hancock also opens up about her ninth decade in conversation about her funny,  feisty and outrageous new book Old Rage.

Across the weekend beauty influencer Anchal Seda talks about her groundbreaking new book What Would the Aunties Say? addressing taboo topics within South Asian culture from careers, colourism, relationships and mental health and Craig Parkinson (best known as bent copper Dot Cottan in Line of Duty) interviews a very special guest for his award winning Two Shot Podcast about creative people and their lives. Poet and mental health activist Hussain Manawer, who recently appeared alongside Prince Harry and Oprah Winfrey in the mental health series “The Me You Can’t See”, also makes a welcome return to the festival performing from his debut poetry collection Life is Sad and Beautiful.

There’s so much happening at cinch presents  Latitude in 2022, some serious refuelling will be in order, and the festival is upping the grub game once again. Street Feast makes a welcome return, ensuring festival goers can feed up, wind down and send their bellies on a world tour with cuisines from every corner of the globe. Theatre of Food, a fully immersive essential for any foodie, also presents wild cooking sessions, hilarious and inspiring food demos and, of course, the chance to sample the goods yourself. This year Latitude-goers can also  look forward to an exciting new restaurant with a  delicious and diverse food offering, cooked up by some familiar faces.

Families looking for quality time together need go no further than cinch presents Latitude’s family programming allowing them to make some magic of their own. This year Aardman presents fun and hands-on,  model making sessions, run by expert model makers, who have worked on Aardman’s best-loved films, including Wallace & Gromit, Chicken Run and Shaun the Sheep.  Across the weekend there will be  family-friendly comedy, live music, dance and theatre,  puppetry, award-winning children’s authors and more.

Now, more than ever, is the time to reunite with family and friends and recharge with nature. cinch presents Latitude attendees can indulge in lake swimming and stand up paddle boarding or retreat to Mind, Body & Zen’s sanctuary of calm with  yoga classes, treatments, workshops and more all in celebration of mental wellbeing.