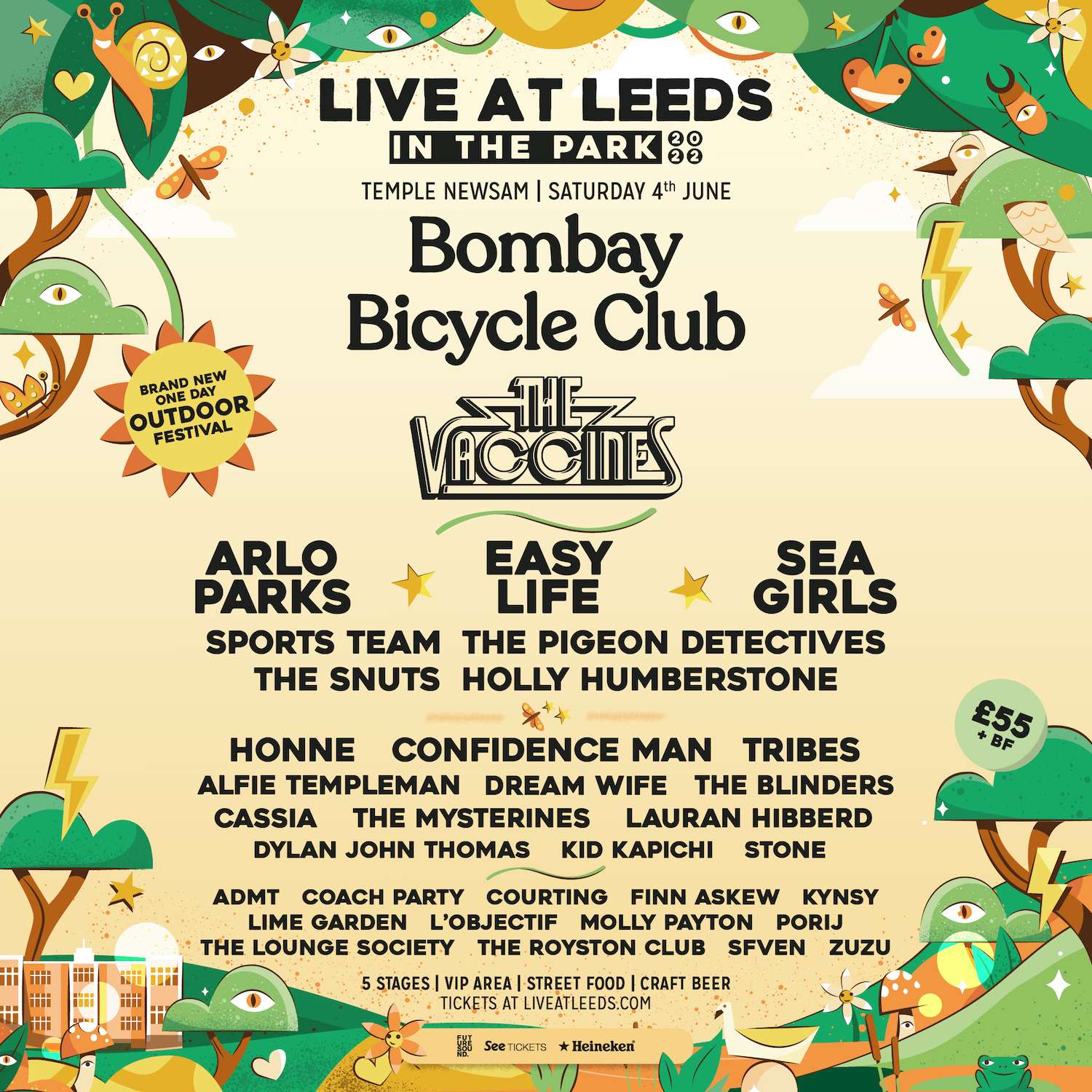 THE VACCINES, HOLLY HUMBERSTONE, THE SNUTS and more revealed in 2nd wave of acts for LIVE AT LEEDS: IN THE PARK

Live At Leeds: In The Park – the new all-day field festival from the people who brought you Live At Leeds – announce an abundance of fresh names who will be performing at the event this summer.

The Vaccines, The Snuts, Holly Humberstone, Sports Team, Dream Wife, Alfie Templeman and The Lounge Society are just some of the acts who will be descending upon the famous Temple Newsam Park in Leeds on Saturday 4th June to join previously announced headliner Bombay Bicycle Club as well as Arlo Parks, Easy Life and Sea Girls for a day of indie and alternative festival frolics.

Heralded as one of the finest indie acts of the past decade, The Vaccines will bring another one of their show stopping performances to Temple Newsam Park this June. After recently bursting back onto the scene with new single ‘Thunder Fever’ it’s contorting pop sounds prove there’s an abundance of creativity still flowing through the band. It follows on from their fifth consecutive Top 5 LP ‘Back In Love City’, which was released last September, and adds to their bulging back catalogue of feel-good indie anthems, which includes mammoth singles like ‘If You Wanna’, ‘Wreckin’ Bar (Ra Ra Ra)’, ‘Post Break-Up Sex’, ‘Teenage Icon’ and ‘Hansdome’. The Vaccines will replace previously announced Nothing But Thieves who are unfortunately no longer able to perform on 4th June.

Get ready to go mad for it when Glaswegian four-piece The Snuts rock up to Temple Newsam Park to prove exactly why their debut album ‘W.L.’ topped the album charts last year. Fresh from her recent appearance at the BRIT Awards, where she scooped up the Rising Star award, Holly Humberstone will wow the Leeds crowd with her ethereal live show glistening with haunting synth pop gems. With a selection of tracks to choose from, with two critically acclaimed EPs under her belt already, there will also no doubt be some surprises from her highly anticipated forthcoming debut album thrown in the set list for good measure. Certainly no strangers to a Leeds-based knees up, Sports Team will also be making their first appearance at the field excursion after many appearances at the festival’s city guise. No doubt throwing together a good old fashioned mosh pit-inducing set expect to see all the hits from their debut record ‘Deep Down Happy’ live in the flesh. Punk rock trio Dream Wife will also be on hand to showcase their adrenaline-filled, electrifying live show.
Speaking about their performance The Snuts said: “We always love performing in Leeds and can’t wait to be back in town for Live At Leeds this summer!”

Indie pop prodigy Alfie Templeman will be bringing good vibes with his unique blend of genre-defying bangers guaranteed to bring the sunshine. Appearing just one week after the release of his debut album ‘Mellow Moon’ it’s sure to be a milestone performance. Keeping in line with glorious, feel-good indie, Cassia will also bring their renowned tropical sounds to Live At Leeds: In The Park fresh from a twelve date UK tour which included two sold out nights at London’s Lafayette, alongside the Isle of Wight’s slacker pop sensation Lauran Hibberd. Bringing a healthy dose of indie nostalgia, Tribes are back in a big way. Catch the Camden band in Leeds before they head out on the road with Noel Gallagher this summer. Elsewhere on the line-up energetic political punk also comes from Yorkshire’s The Lounge Society.

Striding down the M62 from Liverpool with all of the swagger of a band who have just released their stirring debut album (‘Reeling’ is out this month), The Mysterines have built up a solid reputation for a captivating live show. With chilling vocals and mammoth guitar riffs, their appearance at Live At Leeds: In The Park is definitely not one to be missed. Fifteen years on from the release of their debut album ‘Wait For Me’, brimming with multitudes of raucous indie, The Pigeon Detectives will bring all of that angsty energy with them this June and prove why the local lads are such a success story. Not afraid to confront society’s toughest topics in their lyrics, The Blinders have made a name for themselves with their politically-charged alternative rock. The Manchester-based band have already released two LP’s and will be celebrating their new EP ‘Electric Kool-Aid Pt1’ in Temple Newsam Park this summer.

Fast-rising Scottish star Dylan John Thomas is already a household name in his Glaswegian hometown. Having played some pretty big shows with Liam Gallagher and Gerry Cinnamon early on in his career, catch Dylan at Live At Leeds: In The Park on the 4th of June for one of those ‘I was there’ moments to brag about in years to come. Post-punk doesn’t come more bruising than that of STONE from Liverpool who will be adding fuel to their speedy ascent by stopping off in Temple Newsam Park to play one of the most frenzied sets of the day.

STONE said: “We can’t wait to hit Live at Leeds, Leeds has always been a special city to us so we can’t wait to cause beautiful chaos there once again!”

Kid Kapichi said: “Can’t wait to play Live at Leeds – we did their Ones To Watch show before and as always Leeds showed us a mental night. If that was anything to go by LAL in the Park is gonna be biblical x”

For a range of high-res artist images, head here:
https://drive.google.com/drive/folders/1MiZB41hbM7HTcSXB0k5ZaxBMKOfPBhLa?usp=sharing
Taking over the famous Temple Newsam Park in Leeds, Live At Leeds: In The Park promises to be a crowning festival day, continuing those early steps that Live At Leeds have become synonymous for across its city-centre roots and graduating to the grand stages of a huge outdoor festival. Filled with artists who first made their mark in years gone by In The City, their journey continues as Live At Leeds adds a star-studded second show to its yearly calendar – setting itself apart as the only voice you need to follow on the best in new music. Spanning five stages stacked with phenomenal moments and offering the chance to witness your new favourite artists on the biggest stages rubbing shoulders with leading headline greats – it’s the next evolution of the Live At Leeds story and the perfect way to kick-start your festival summer.

It all comes together for the sort of festival experience that new music fans have been crying out for. Continuing the history of Live At Leeds that has welcomed through the biggest artists on the planet over the years, Live At Leeds: In The Park is set to become a must-visit destination for those looking for their fix of unforgettable festival memories.

Tickets for Live At Leeds: In The Park are on general sale now, with special VIP tickets available from £75 and General Admission tickets starting from £55 (excluding booking fees) – available from:

Live At Leeds: In The Park sits as the perfect accompaniment to the Live At Leeds experience that’s become such a vital date in the diary for live music fans, tastemakers and more. Its revered city-centre showcase has over the years been the first place to see the early steps of global superstars such as Ed Sheeran, Stormzy, The 1975, Lizzo, Royal Blood, Sam Fender, Sam Smith and many more – always one step ahead of the curve and pointing to the next big thing. The home of new music, Live At Leeds serves as more than just one day – but a trusted voice on the latest and greatest acts set to soundtrack the months and years ahead, whilst celebrating its unbelievable alumni who have graced its stages over the years.

Plus many more across 5 stages.