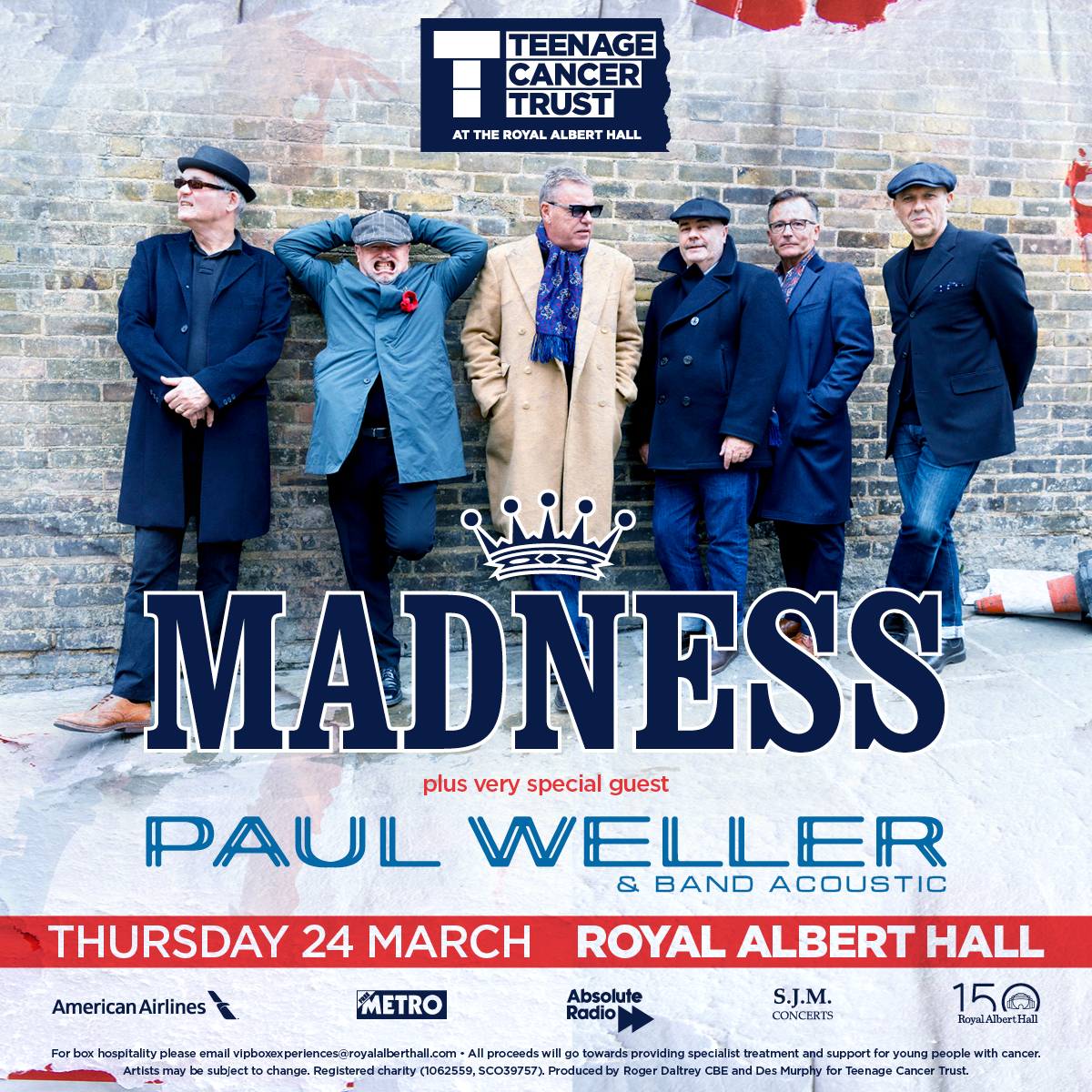 Today Madness have announced that Paul Weller & Band will join as guests at Teenage Cancer Trust at the Royal Albert Hall on Thursday 24th March for very special acoustic performance.

Paul Weller remains a true British icon, with a career in music spanning six decades. Weller has released an extensive back catalogue of top 40 albums across The Jam, The Style Council and his solo releases, including seven number ones. Paul Weller joins Madness following the release of his 16th Studio album chart topping “FAT POP (Volume 1)” last year and the magnificent, “LP ON SUNSET” in 2020.

Madness famously emerged from the backstreets of Camden Town in the late 1970s, part of the original two-tone movement, who went on to become national treasures.  Famed for their huge chart hits (including classic songs Our House, One Step Beyond and Baggy Trousers), unique style and sense of humour, they stand as unique amongst much-loved British pop bands.

The evergreen Nutty Boys got back on the road at the end of last year for their first tour after 18 months in lockdown and Teenage Cancer Trust at the Royal Albert Hall will be a treat for fans before a summer 2022 return.

The iconic concert series has featured the greatest music and comedy for two decades, raising money for Teenage Cancer Trust and driven by Teenage Cancer Trust Honorary Patron and The Who icon, Roger Daltrey.  But in 2020, just as the concerts were about to celebrate 20 years of legendary moments, COVID-19 shut them down, with lockdown starting on the day of the first scheduled show. 2021 went the same way, so it is a more than welcome return for this vital charity event, which will run from March 21-27th.

Irrepressible star YUNGBLUD performs on Wednesday 23rd March, legends Madness on Thursday 24th March, then the return of The Who, playing a very special acoustic show on Friday March 25th. The iconic Liam Gallagher will play Saturday 26th March, with global superstar Ed Sheeran on Sunday 27th March to round off an incredible week.

Tickets are onsale now via  www.teenagecancertrust.org/gigs

Exclusive Resale Partner:
TEENAGECANCERTRUST.TWICKETS.LIVE
Your ticket is not valid if offered for sale or resold unless it’s through our official face value resale partner Twickets.
Please note that Viagogo are not official ticket partners and are in no way connected with these shows. Tickets purchased from Viagogo or any other seller not listed above
will be cancelled and will not be valid for the shows. Teenage Cancer Trust supports the FanFair Alliance.