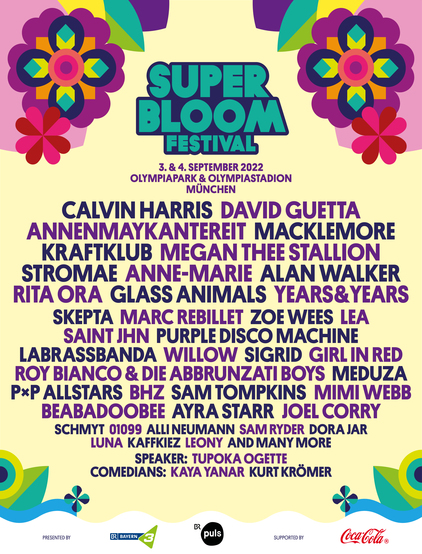 Taking place on 3rd and 4th September, the SUPERBLOOM Festival will transform the historic Olympic Park in Munich into an unforgettable wonderland for visitors to immerse themselves in, with several stages featuring local and international artists and numerous entertainment areas to explore. SUPERBLOOM is more than just a music festival and will offer an experience for all the senses.

Now the line-up of the festival main stages is being supplemented by more global megastars with the festival securing two performances that are exclusive to Germany: Both the UK DJ, singer, songwriter and producer Calvin Harris, who has already landed many global chart hits with his numerous high profile artist collaborations, and the American rapper Macklemore will play their only German concert at SUPERBLOOM in Munich. US rapper Megan Thee Stallion, whose lyrics are razor-sharp, and the British Grime superstar Skepta, on the other hand, will both be making their debut in Munich. Top global female superstars on the line up include the UK’s Rita Ora, Mimi Webb, Will Smith’s daughter Willow, Norwegian pop sensation Sigrid and actress and singer Alli Neumann.

Also confirmed is the now one-man band Years & Years, with singer, songwriter and more recently TV star Olly Alexander – one of the hottest comebacks of the year – and newcomers to the German rap scene Schmyt.

In addition to the musical highlights, best-selling author, human rights activist and anti-racism expert Tupoka Ogette will give a keynote speech on the main stage. The Berlin comedian Kurt Krömer and comedy veteran Kaya Yanar will provide plenty of laughs and humor with their comedy shows, plus many other artists and podcasters who will also be part of the diverse line-up.

SUPERBLOOM is more than just a music festival: the numerous experience areas offer something for all the senses. In a total of eleven experience areas, there is something to discover, experience and interactive with at every turn from art to fashion, science to sustainability, dance and acrobatics and much more.  District4 is a lifestyle-fashion-sports area and YOUR PLANET will deal with sustainability issues. Art is the focus of the ArtBloom and the LakeGallery: Here you will find imaginative sculptures and unique installations as well as urban art created by national and international street artists. In the Spectacular section, visitors will be amazed by dance, acrobatics, circus and performances. The content for the SuperBrain area, which deals with science, medicine, research and technology, and the area for the youngest guests from 0-12 years, MiniBloom, have already been published. Further experience areas as well as the line-up of the newcomer stage NeoNeo and the BeerBrass&Beats beer garden will be announced in the coming months.

The organisers are pleased to implement the SUPERBLOOM Festival for the first time in Munich and assume a normal festival season without major restrictions. All regulations in force at the time of the event will be implemented.

Advance ticket sales have already started in November. The 2-day ticket for Saturday and Sunday is available from 169 EUR.
Teen tickets for 12-15 year-olds will be offered at a reduced price of 99 EUR and limited Kids tickets for free.

These and other ticket categories are available at www.superbloom.de.