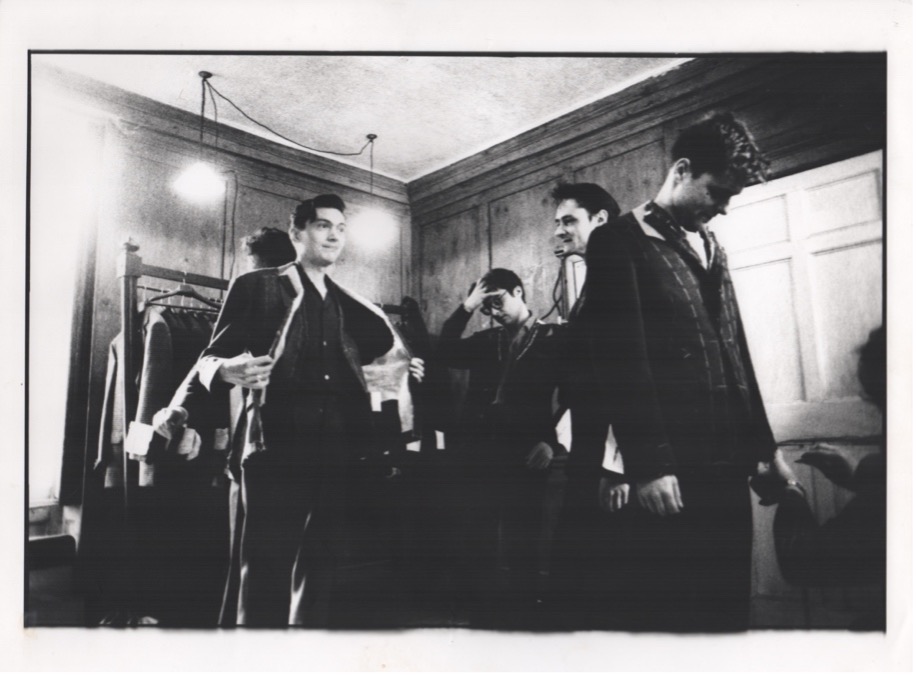 As the band celebrate their thirtieth year, today Tindersticks launch the first 10 years of their online archive ‘El Santuario Del Los Burros’ at www.elsantuariodelosburros.com.
The band comment: “30 years is a difficult landmark to breeze by without stopping to take stock. When we reformed in 2007 we agreed to only live in the present, push into the future: This has served us well and we hope this dabble with the past is not a destructive move!

Building this archive has been painstaking and we are only one third done: 1992 to 2001. And rebuilding the 90’s in our minds brought so many conflicted feelings – the best and the worst of times, for sure.

We have done our best to remember and describe events. Early singles, concert recordings, films, artworks, photo sessions have all been found and rebuilt or spruced up. Most importantly, everything we made in this period is now in one definite place and it is free for anyone to discover”

In January, the band announced the compilation ‘Past Imperfect: The Best of Tindersticks ’92-’21’, to be released on 25th March via City Slang and shared “Both Sides Of The Blade,” a previously unreleased track that was written for Claire Denis’ forthcoming film, “Avec amour et acharnement”, starring Juliette Binoche. Claire won the best director award for the film at the Berlin International Film Festival in February, 2022.

The video is Tindersticks frontman Stuart Staples’ own visual take on the song and is online now.

Mavens of intimate and expansive mood-song, Tindersticks have forged paths of their own unobstructed making over three decades, avidly trend-averse in their dusky and far-reaching explorations of the heart. ‘Past Imperfect: The Best of Tindersticks ’92-’21’ maps the band’s 30-year journey across a peerless 20-track chronology. “Each step a story,” as Tindersticks frontman Stuart Staples said on “How He Entered”. And every song a fresh twist in a winding tale.

Hindsight tells a richer story, of course, but they gave the impression of arriving fully formed in the early 1990s. Brimming with ambition and imagination, Tindersticks’ first three albums issued ragged ruminations and tea-stained symphonies from the trenches of trouble and desire. The press shook up references to The Bad Seeds, Leonard Cohen and Lee Hazlewood, with Ennio Morricone’s orchestra as the bar-band. But the six-piece were architects of their own world.

Formed in Nottingham, the band were tight-knit and clear about what they wanted to be. Free of ego, here was a band who truly listened to one another, reflected in songs that hover in the spaces between players or take wing with a pooled potency.

Over the following three decades, the band flourished and made their mark as they experimented and excelled, opening themselves up to collaboration and notching up ambitious concerts and residencies.

For Staples and Boulter, recent projects have brought with them the promise of an open page: a pointer to futures as yet unwritten. “I think there’s always that feeling that there’s something you haven’t quite grasped yet, musically,” says Boulter, pinpointing the twinned engines of yearning and ambition at Tindersticks’ core. Meanwhile, ‘Past Imperfect’ honours how they entered. It is the sound of an uncommonly ambitious band always seeking new ways to connect with their songs, rediscovering themselves as a unit at every turn so that everything familiar about their music sounds fresh again. Always, of course, by nobody’s measure but their own.

“One of the greatest things I feel in approaching this milestone,” says Stuart of the band’s 30th, “is that all of the mistakes we’ve made are our mistakes. If there’s something wrong, there’s something wrong because we decided in the moment that this is what we should be and we physically made it that way. I’m kind of proud of that. We’re still here, we’re still connected, we’re still pushing and it’s been totally on our own terms. I can’t really think of many other bands that are in that situation.”

‘Past Imperfect…’ is in chronological order and split in to 4 sections/2 halves – the first half being the original line up of the band with Al Macaulay (drums), Mark Colwill (bass) and Dickon Hinchliffe (violin, guitar, string arrangements). The second half is the present-day line up with Earl Harvin (drums) and Dan McKinna (Bass, piano, string arrangements). Stuart. A. Staples, Neil Fraser (guitar) and David Boulter (various instruments) are always present.

There are two songs from Claire Denis films – ‘Tiny tears’ from ‘Nénette et Boni’ (’96) and ‘Both Sides of the Blade’ from her latest film ‘Avec amour et acharnament’ (’21). There is also the version of ‘Willow’ sung by Stuart, rather than Robert Pattison who sang the version in ‘High life’ (’19).

Tindersticks live dates:
with Orchestra and Guests
* with string quartet and guests