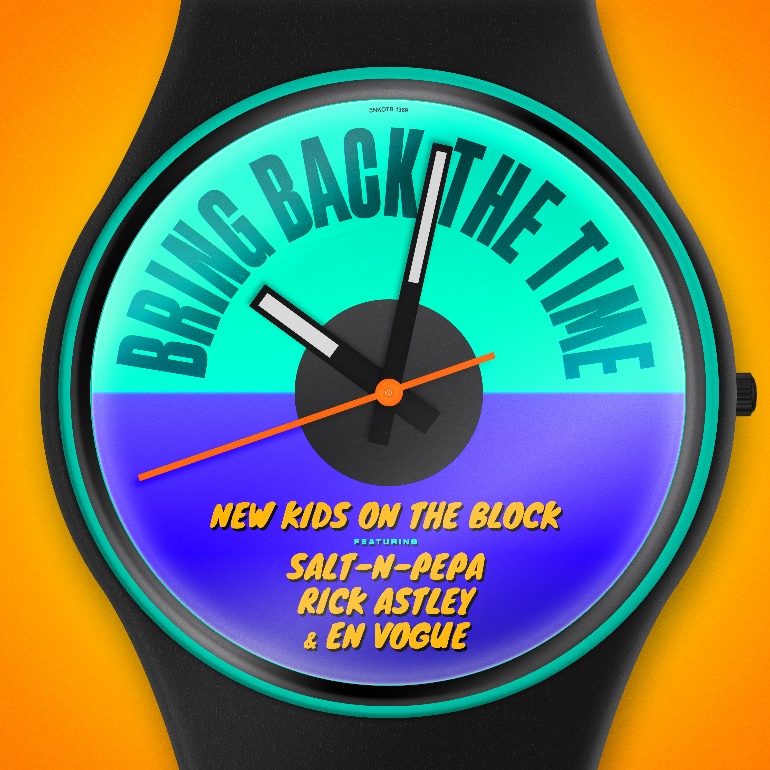 Multi-platinum pop icons New Kids on the Block release “Bring Back The Time,” the feel-good instant hit sure to get everyone smiling. Joined by their upcoming Mixtape Tour 2022 tour mates, Salt-N-Pepa, Rick Astley and En Vogue, New Kids on the Block are bringing fans the high-octane anthem that they all need right now.  ListenHERE. A historic first, the song marks the only time the artists have all collaborated on music together.  “Bring Back The Time” is accompanied by an epic music video, which premiered exclusively on Billboard.com – WATCH HERE.

To celebrate the release, New Kids on the Block sat down with Good Morning America for an exclusive interview and to make the performance debut of “Bring Back The Time” with special guests Salt-N-Pepa, Rick Astley and En Vogue. WATCH HERE.

Co-written and co-produced by Donnie Wahlberg the song aims to uplift and inspire listeners. The song embodies the feel-good sentiment of their upcoming tour with Donnie saying of the song, “”From the second I started working on this song, I knew it could be a perfect anthem for the entire Mixtape 2022 tour!  Sort of like a ‘Mixtape within a Mixtape’.  When the other artists from the tour lineup responded with such enthusiasm, and were willing to take this nostalgic musical journey together, I knew it would be something special for all of our fans.  Hopefully, ‘Bring Back The Time’ captures a love of music, of making memories and of people celebrating the best of times.  We plan on bringing that very energy to the stage every single night!”

Directed by John Asher, who previously collaborated with NKOTB on their music video for “Boys in the Band,” and conceptualized and Creative Directed by Donnie Wahlberg, the video sees NKOTB, Salt-N-Pepa, Rick Astley & En Vogue recreating a string of iconic 80s Music Videos. After an intro from the fabled DJ, VJ and music video director Ralph McDaniels, viewers won’t be able to resist making original vs. new video side by side comparisons. Watch the stars recreate Journey’s “Separate Ways,” Twisted Sister’s “We’re Not Gonna Take It,” Flock of Seagulls’ “I Ran,”, Michael Jackson’s “Beat It,” Devo’s “Whip It,” Duran Duran’s “Rio,” Billy Idol’s “Flesh for Fantasy,” Madonna’s “Vogue,” Robert Palmer’s “Addicted to Love” and Tony Basil’s “Mickey,” with a special appearance by Max Headroom.

Earlier this year NKOTB announced The MixTape Tour 2022, with their friends Salt-N-Pepa, Rick Astley and En Vogue as legendary special guests. Produced by Live Nation, the four iconic acts will embark on The MixTape Tour 2022 for its 50+ date journey beginning May 10 in Cincinnati, OH and make stops in arenas in Nashville, Dallas, Los Angeles, Atlanta and more, before wrapping July 23 in Washington, DC. See full itinerary below. Tickets on-sale nowat Ticketmaster.com.

NKOTB will hit the stage on the MixTape Tour 2022 to perform fan favorite #1 hits like “Hangin’ Tough,” “I’ll Be Loving You (Forever),” and “Step By Step” while tour mates Salt-N-Pepa (“Push It,” “Shoop,” “Whatta Man”), Rick Astley (“Never Gonna Give You Up,” “Together Forever”) and En Vogue (“Don’t Let Go [Love],” “Free Your Mind,” “Give It Up, Turn It Loose,” “Hold On”) keep the party going with music that catapulted them to stardom and solidified their places in music history.

New Kids on the Block have sold more than 80 million albums worldwide — including back-to-back international #1 songs, 1988’s Hangin’ Tough and 1990’s Step By Step — and a series of crossover smash R&B, pop hits like “You Got It (The Right Stuff),”  “Cover Girl,” “Didn’t I (Blow Your Mind This Time),” “Hangin’ Tough,” “I’ll Be Loving You,” “Step By Step” and “Tonight.” The group which started with humble Boston beginnings grew to shatter concert box office records playing an estimated 200 concerts a year, in sold out stadiums throughout the world.  Since reuniting in 2007, NKOTB have toured consistently to sold out arenas, have sold nearly 4 million tickets and have doubled their crowd sizes. The Boston natives have been bestowed with their very own, “New Kids on the Block Day,” an honor not many can claim, and have played Fenway twice before. The group solidified their place in Hollywood with a star on the Hollywood Walk of Fame since reuniting and will continue representing Boston on their journey long into the future.

For more information on NKOTB, “Bring Back The Time” or up to the minute news visit www.nkotb.com.