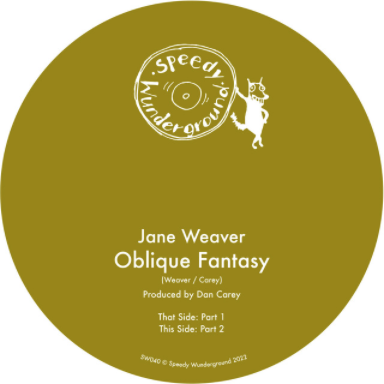 Speaking about the process of recording at Abbey Road, Jane Weaver says: ‘I was invited to Abbey Road to record for one of their ‘Lock-In’ Sessions, so I asked Dan to be involved. I’ve always admired Dan’s production style – it’s really exciting and dynamic, most records I like these days have his name on them, and for ages I’ve been keen to have a look around his studio and explore the possibilities to do something creative together. We wrote the song at Dan’s place and then recorded it at Abbey Road’s Studio Three. Having to turn it around, write and record a song from scratch within 24hrs was really exciting as we’d never worked together before, but I knew we shared a joy for certain sounds and equipment.’

Abbey Road’s ‘Lock-In’ series is designed to illuminate the musical creative experience, offering a window into an otherwise closed process. Artists are invited into the studios for an unexpected collaboration, or to record a new interpretation of an existing song, using only the mix of vintage instruments and future tech provided by Abbey Road. Django Django x Denai Moore and Fontaines D.C. have both released ‘Lock-In’ singles over the last year.

Speaking about Jane Weaver’s new release, Abbey Road’s Head of Brand & Communications, Mark Robertson says: ‘We’ve wanted to work with Jane for some time, so the chance to see her collaborate with Lock-In stalwart and master experimenter Dan Carey was not to be missed. For Abbey Road, the intention was simply to document Jane and Dan’s creative process on film, so the fact that the session has resulted in a release on Speedy is fantastic. We’re thrilled to add the track to the growing Abbey Road Lock-In canon of releases.’