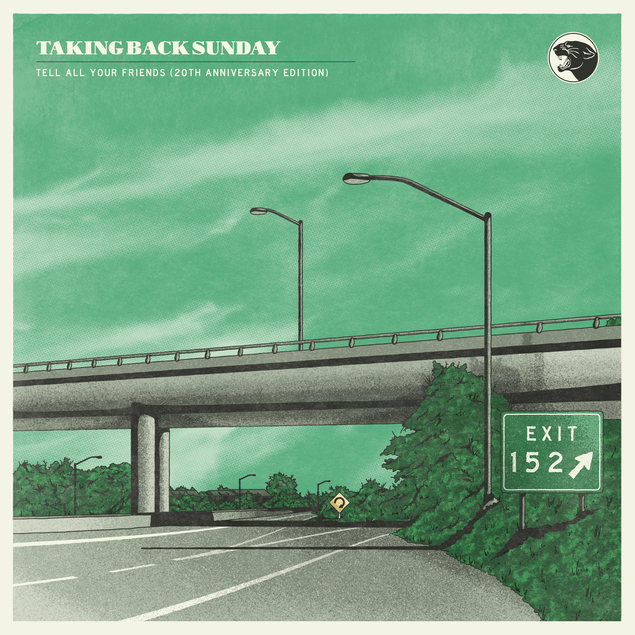 Craft Recordings celebrates the 20thanniversary of Taking Back Sunday‘s landmark debut album, Tell All Your Friends, with a variety of special reissues and bonus content. Set for release on May 27th and available for pre-order today, all formats offer newly remastered audio, while the vinyl, CD and digital editions feature four previously unreleased demos of “Mutual Head Club,” “Bike Scene,” “The Blue Channel,“ and “Great Romances of the 20th Century”—the latter of which is available today across digital platforms (stream/pre-save now).

The deluxe, 2-LP vinyl set is housed in a gatefold jacket, offering the remastered original album plus a bonus etched 10-inch disc with the four demos. Various limited edition colour pressings will also be available, each offering a unique colour for LP1, along with the standard black 10-inch. Fans can pick these up via the band’s webstore and on tour (Blue Smoke and Forest Green vinyl), Craft Recordings (Fog vinyl), Revolver (Orange Crush vinyl), and Urban Outfitters (Sangria vinyl). Rounding out the LP and CD formats are new liner notes from journalist Glenn Gamboa, who covered music for the Long Island-based Newsday during the band’s rise to fame. Additionally, a limited cassette edition will deliver the classic 10-track album, which includes such iconic hits as “Cute Without the ‘E’ (Cut from the Team)” and “You’re So Last Summer.“

Originally released in 2002, Tell All Your Friends not only propelled Taking Back Sunday to global stardom but also became a defining album in the alt-rock canon. Yet, as the Long Island band readied to record their debut, their expectations were modest—evidenced by the album’s tongue-in-cheek title. After solidifying their line-up in 2001 and recording a five-song demo, Adam Lazzara (vocals), Eddie Reyes (guitar), John Nolan (guitar + vocals), Mark O’Connell (drums), and Shaun Cooper (bass) caught the ears of Victory Records, who signed them promptly that December. Not long after, the band entered New Jersey’s Big Blue Meenie studio with producer Sal Villanueva (Thursday, Murphy’s Law) to record Tell All Your Friends.

Released in March 2002, the album delivered a blend of hardcore, punk, and pop-forward anthemic melodies with heartfelt lyricism and an emotionally charged delivery. Relatable, angsty, and cathartic, Taking Back Sunday’s music touched a nerve with a new generation of alt-rock fans. In his liner notes, Gamboa argues that the album’s songs “capture universal feelings that don’t generally get much play. We can all name a dozen love songs right now, sure. But how many songs can you name about wanting to be the one to betray your ‘best friend’ to ensure his downfall? What about the power of frenemies?”

He continues, “The feelings that Tell All Your Friends conjures up don’t even have to come from the hyper-literate lyrics, from a thousand clever lines unread on clever napkins. That mosh pit of emotions, which were extra raw in those angst-ridden days, starts with the driving rhythms from Mark O’Connell’s drum and Shaun Cooper’s bass. It soars on the triumphant guitar riffs from John Nolan and Eddie Reyes. Soon, you’re screaming along with Adam Lazzara. That is magic.”

Initially, fans were drawn in by “Cute Without the ‘E’ (Cut from the Team)”—the first track off Tell All Your Friends to be released online, and now, perhaps the band’s most enduring song. Following the album’s announcement, two more singles arrived: “Great Romances of the 20th Century,“ which chronicled the end of a doomed relationship, followed by “You’re So Last Summer,” which served as an ode to summer flings. Eventually, “Cute Without the ‘E'” was officially released as a single and the high-energy (and utterly infectious) track spread quickly across the airwaves, helping to popularize the post-hardcore sound that would become mainstream in years to come.

In its first week, Tell All Your Friends sold nearly 2,400 copies—no small feat for a relatively unknown act. Over the following months, sales began to increase steadily, and mightily, thanks to the grassroots efforts of the band, their label, and their fanbase. The album’s title proved to be eerily prophetic, as the emerging power of online fan communities (particularly on Myspace) and peer-to-peer sharing fueled the band’s popularity. Tastemakers took notice as well, including MTV and alternative radio stations across the country, while the band performed on late-night TV shows, including Last Call with Carson Daly and Jimmy Kimmel Live!, during breaks from their busy tour schedule.

Within a year of its release, Tell All Your Friends had surpassed 100,000 units—a number that would double by the end of 2003. In 2005, it was certified Gold by the RIAA. Today, Tell All Your Friends has sold over one million copies and continues to be a fan favourite in Taking Back Sunday’s lengthy body of work. The band revisited the title in 2012 with a 10th -anniversary tour, followed by a live, acoustic version of the album, TAYF10 Acoustic, a year later.

Two decades after its release, the legacy of Tell All Your Friends cannot be underestimated. Among its many accolades, the title was ranked among Rolling Stone‘s “40 Greatest Emo Albums of All Time” and NME‘s “20 Emo Albums That Have Resolutely Stood the Test of Time” lists. Alternative Press called Tell All Your Friends “The record that changed everything,“ adding that it was “As close as it gets to a modern masterpiece, capturing not just a band at their apex, but an entire scene. It will never be duplicated.“ The BBC praised the band’s “ability to write fantastically catchy songs that are poppy and fun as they are upbeat and emotionally aggressive,“ while Drowned in Sound simply declared it to be “the start of a movement.“

For the band, however, Tell All Your Friends represented something more. During an era when indie bands were still limited in their reach, Taking Back Sunday defied the odds, breaking through to the mainstream—and staying there. It also proved the power of the fanbase (and the internet) years before social media reached its apex. Most importantly, Tell All Your Friends launched the band’s 20+ year career,a benchmark that few acts can achieve.

When reflecting on the last 20 years since the album’s release, Nolan says, “During our live shows, there is a part during ‘Cute Without the ‘E” where we stop and let the crowd sing, ‘Why can’t I feel anything from anyone other than you.’ That has become an unbelievably moving moment for me. The connection between us and the audience is so apparent and so strong. The crowd screams it at us, we stand back from our mics screaming it at them, and the lyrics take on more significance than we ever imagined they could. In a lot of ways, that moment is a distillation of what Tell All Your Friends has meant. It sums up the mind-boggling psychological and emotional connection we made with people 20 years ago that’s still going strong today.”

The current line-up—vocalist Adam Lazzara, guitarist and vocalist John Nolan, drummer Mark O’Connell, and bassist Shaun Cooper—have been through a lot together. The band, in its various formations, has released seven albums to date (four of which were in the Billboard 200 Top Ten and three of which earned gold records). In 2018, Taking Back Sunday joined such iconic artists as Billy Joel, Joan Jett, and Lou Reed as inductees of the Long Island Music Hall of Fame, while in 2019, they celebrated their 20thanniversary as a band with an extensive tour and a career-spanning compilation, Twenty. In addition to working on a new album this year, the band is readying for an extensive summer tour across the U.S. with Third Eye Blind (see dates below). They also look forward to performing at Las Vegas’ highly anticipated When We Were Young festival in October.

Click here to pre-order or pre-save Tell All Your Friends (20th Anniversary Edition).

A5. Great Romances Of The 20th Century

B1. Ghost Man On Third

B2. Timberwolves At New Jersey

B3. The Blue Channel

B4. You’re So Last Summer