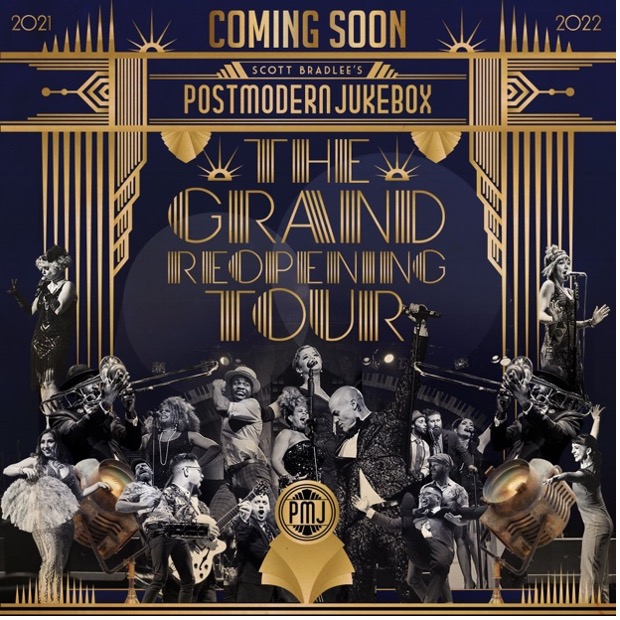 Performing some of modern music’s biggest hits in the classic styles of bygone eras, Postmodern Jukebox are bringing “the most sensational ’20s party this side of The Great Gatsby” across the pond, in the shape of The Grand Reopening Tour. The UK and Irish leg starts next month and with venues selling out fast, this is looking to be the hottest ticket this spring!

“I’m grateful to be able to create and collaborate with so many talented people and playing live to a theatre full of music fans is something that we’ve all really missed,” says Scott Bradlee. “We’re fortunate to have so many incredible fans worldwide that have enabled PMJ to become a global touring act, and we’re looking forward to bringing outstanding talent and classic sounds to every corner of the globe once more. It’s a Grand Reopening, but it’s also a Grand Reunion – not just for our talented cast and crew, but also for PMJ and fans of classic, ‘Old School’ entertainment.”

As always with PMJ’s extraordinary live shows, The Grand Reopening Tour will feature an ensemble of multi-talented singers and musicians. The core ensemble is often joined by surprise guests to make each concert inimitable and unpredictable – making for a thrilling and unique live music experience, of this and any other time period.

Over the past decade, Postmodern Jukebox has grown from a viral phenomenon into a worldwide juggernaut, amassing more than 5.5 million subscribers and a stratospheric 1.77 billion views on their YouTube channel, growing from Bradlee’s tiny apartment in Astoria, Queens. Recently PMJ reimagined the beloved theme from Friends via the evolution of music styles throughout the 20th century – beginning in the Hot Jazz 1920s and triumphantly finishing in the 90s with a guest appearance by original “I’ll Be There For You” performers, The Rembrandts.