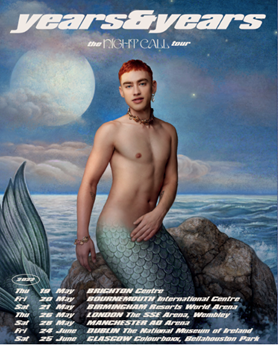 Olly Alexander has curated a first-of-its-kind, all-queer line-up of talent, from radical collective Queer House Party and rising pop stars L Devine and Eddy Luna to Cat Burns (who just went top 10 with viral hit ‘Go’). Befitting Years & Years’ trailblazing influence on modern pop, ‘The Night Call Tour’ will set the agenda far beyond a standard tour: Olly will utilise a buddy initiative for fans travelling to the shows alone, have BSL interpreters throughout the gig, and bring the subversive, hedonistic and ultimately feel-good world around number-1-charting album ‘Night Call’ to vibrant life.

Featuring tenth top 40 single ‘Sweet Talker’, ‘Night Call’ is the definitive Years & Years experience. With a sound as inspired by pioneering figures like Sylvester as it is the club-ready world of French House, this 11-track dance record explores stories of queer life in the way only Olly Alexander can. Across three hugely successful albums to date, the singer, actor, fashion icon and cultural vanguard has earned 5 Brit Award nominations, surpassed 4.4 billion global streams, and made headlines around the world with award-winning show, ‘It’s A Sin’. The show now leads the nominations for the 2022 Bafta television awards, where it is up for eleven prizes (including Olly for Leading Actor) ahead of the ceremony on April 24th.

Appearing everywhere from his own BBC 1 special and the latest Savage Fenty campaign to the Harris Reed retrospective at the V&A, Olly Alexander continues to use his platform to push the boundaries of mainstream superstardom: and in 2022, he’s taking that on the road. ‘The Night Call Tour’ promises to be Years & Years’ biggest queer spectacle to date, and is not to be missed.

ABOUT CAT BURNS: Propelled into the spotlight with her Top 10 single ‘Go’, London singer / songwriter Cat Burns is sharing her frank and compelling artistry one song at a time. Currently making waves with ‘Go’, the breakup anthem has received outstanding viral success, with combined content around the track gaining over 564 million views on TikTok and surpassing 25 million Spotify streams. Ready to make her mark on the UK live music circuit this year, Cat will be making her debut appearance at The Great Escape in Brighton in May before headlining three sold-out shows at London’s Omeara and The Deaf Institute in Manchester. The burgeoning South London artist will also support Mae Muller and Years & Years on their respective UK tours.

ABOUT L DEVINE: With her latest releases NEAR LIFE EXPERIENCE: PART 1 and 2, alt-pop singer-songwriter L Devine cemented her reputation as a pop adventurer exploring all corners of pop music and making them her own. Featuring Radio 1 playlisted tracks ‘Girls Like Sex’, ‘Priorities’, ‘Boring People’ and ‘Naked Alone’, the songs span L Devine’s experiments in pop music, unified by her knack for consciously telling stories both sonically and lyrically. The track ‘Die On The Dancefloor’ – “an ode to all the nights out we’ve missed out on over the past 18 months” – premiered as Clara Amfo’s Hottest Record ahead of L Devine’s long-awaited UK headline tour, which included London’s Heaven. A joyous celebration of the life-affirming rush of being back on the dancefloor, the song perfectly matches the mood as live music makes its return. L Devine rounds off 2021 by teaming up with Dork magazine for a series of special A Very Dork Christmas with L Devine shows this December.

ABOUT QUEER HOUSE PARTY: Queer House Party are an award-winning LGBTIQ+ DJ collective and clubnight from London. From lockdown live streams in their kitchen to the packed-out clubs, in less than two years Queer House Party has taken the London scene by storm and given it a much-needed injection of queer joy and anarchist energy. Now with six huge sold-out shows under their belt, Queer House Party keeps their politics and activism central to their events, creating a space that is not only accessible for the whole LGBTIQ+ community but puts issues they care about to the front. In addition, they use their collective to draw attention to injustice, throwing events in solidarity with groups such as Sisters Uncut, Black Lives Matter, Calais Appeal, and United Strippers of the World. Queer House Party has collaborated with, and thrown parties for Cybertease, Drag Syndrome, Olly Alexander, The Wolrd Transformed, Quiplash, Bricks, the Barbican, BFI, the V&A, Somerset House, and Gendered Intelligence, and they’re not stopping anytime soon. Mostly, they think raving and kicking off go hand-in-hand, and they’re here to show you how.

ABOUT EDDY LUNA: Further proof of the wealth of musical talent emanating from outside of the M25, Eddy Luna is a gifted singer-songwriter matching raw, introspective lyrics about relationships and mental health with neo-soul and jazz-indebted production. Hailing from Dudley in the West Midlands, the 25-year-old draws from all corners and eras of music to form something completely unique and compelling: a cross-pollination of influences and styles, blending everything from the lush instrumentation of Flower Boy-era Tyler, the Creator, to the accomplished musicality of Hiatus Kaiyote. Designed to induce confidence and knowledge of self, Eddy Luna’s music aims to help and guide the listener through the dark times that she’s experienced first hand. “That’s why I love music so much,” she says, “because it makes me feel different emotions, or acknowledge emotions that I didn’t know were a thing in my life.”