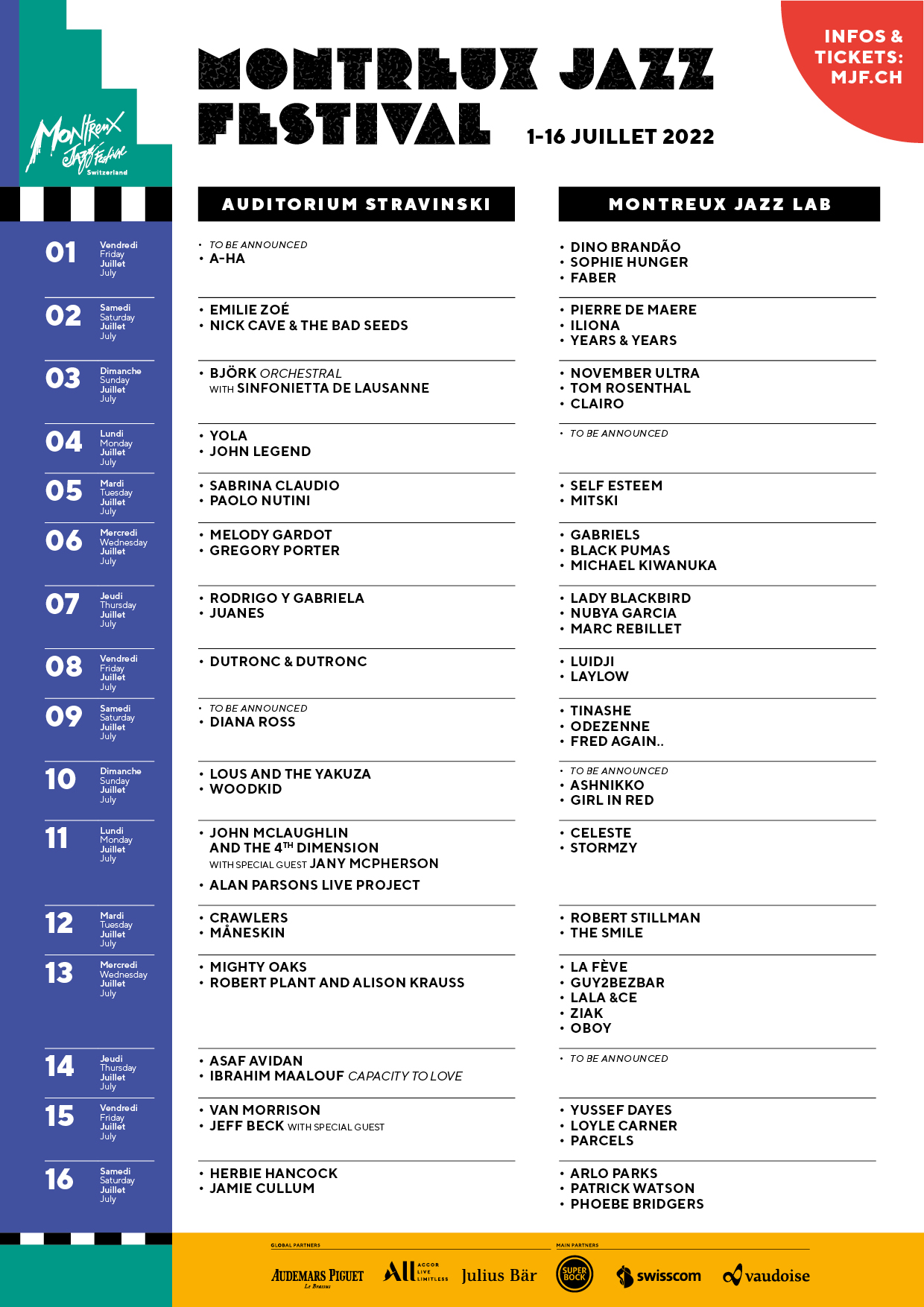 Montreux Jazz Festival today unveils the programme for the 56th edition of the iconic Swiss music festival, which takes place this year from 01-16 July on the Lake Geneva shoreline. Returning to full capacity for the first time since the beginning of the pandemic, Montreux is back with its biggest line-up yet. Performances during the action-packed two weeks will take place across the festival’s two iconic venues, the Auditorium Stravinski and the Montreux Jazz Lab, plus a series of free stages.

The 56th edition of the Montreux Jazz Festival will once again combine the timeless with the new, featuring pop icons, elite rappers, jazz legends, mythical rockers and a supreme diva all in one place. Across two weeks at Montreux, music lovers can enjoy a dizzying panorama of sound at its two venues, the Stravinski and the Montreux Jazz Lab. After two editions of enforced silence, the festival can continue to generate legendary stories and unforgettable moments.

Twenty-four years after her last performance at Montreux, Björk will make an emphatic return at the Auditorium Stravinski this summer with the orchestra Sinfonietta de Lausanne. The Icelandic innovator is currently preparing for the release of her 10th album, which will undoubtedly continue her run of seminal work, paving new pathways in the crossover worlds between art-pop and electronic music. In the latest in a long line of historic moments at the festival, the supreme diva Diana Ross will perform for the very first time at Montreux this year. From her early days with Motown to creating some of the most timeless disco hits including “Upside Down”, the Detroit icon embodies an era of music and her performance this year promises to be another classic for the Montreux annals.

In the rock department, the Stravinski Auditorium has plenty to raise the volume levels. Masterful poet, crooner, and wild performer, Nick Cave is back with his faithful sound engineers The Bad Seeds. Continuing the Stravinski’s rock performances, British legends Van Morrison and Jeff Beck take to the stage at Montreux. Having collaborated with some of the greats including Mick Jagger and Stevie Wonder, Jeff Beck promises to be a night to be remembered. Van Morrison will bring his inimitable brand of Celtic Soul to the festival for what will undoubtedly be another of his famously transcendent live performances. Having triumphed at Eurovision 2021, the Italian quartet Måneskin have continued to go from strength to strength, winning plaudits in the UK on top of their European fandom. With the ultimate endorsement of an Iggy Pop collab now under their belts too, the future looks bright for Måneskin. Taking to the stage ahead of Måneskin is Liverpool alt-rockers Crawlers, who have recently
announced a sold-out UK tour. Following their viral hit ‘Come Over (Again)’ at the start of the year, the band have continued to impress crowds with their catchy song-writing skills.

Jazz is back in the spotlight at the Stravinski Auditorium with a high-flying cast featuring several friendly faces of the festival, including Herbie Hancock and Jamie Cullum, performing on the same evening for the first time in Montreux.  On 06 July, Melody Gardot and the soulful baritone of Gregory Porter, two of the greatest voices in modern American jazz will grace the Montreux stage. Norwegian synth-pop trio a-ha, a cult phenomenon of the 1980s, will perform at the festival for the very first time this year. Released in 1984, their timeless hit “Take on Me” recently ticked over one billion views on Youtube, entering them into an exclusive club achieved by only five other songs from the 20th century. Making their return to the Montreux stage this year, includes Scottish crooner Paolo Nutini, who is back on tour for the first time in seven years, Woodkid, who returns to the Stravinski Auditorium for the first time in six years, and twelve time Grammy Award-winning singer-songwriter John
Legend, who will delight the crowds of Montreux for the third time.

This year, the Montreux Jazz Lab’s line-up features some of the world’s biggest stars and cutting edge artists at the top of their game, bringing an eclectic mix of genres to the stage. Following the success of his Heavy is the Head tour, Stormzy will perform at Montreux for the very first time. Known for giving some of the most iconic moments in British music, the “Vossi Bop” rapper will be performing his thrilling combination of grime and UK hip-hop at this year’s festival. Slowing down the pace, Loyle Carner’s introspective, jazz-influenced style of hip-hop is another great addition to this year’s bill. Fans still remember Radiohead’s mythical performance at the Stravinski Auditorium nineteen years ago and this year Thom Yorke and Johnny Greenwood return to Montreux accompanied by Sons of Kemet drummer Tom Skinner with their new project, The Smile.

Indie will be embodied in all its many forms at the Lab by the powerfully emotive Phoebe Bridgers, the electrifying Girl in Red, the wry and visceral Mitski, and the prodigious Clairo. Trailblazing modern pop-star and LGBTQ+ icon Years & Years will be bringing his synth-pop anthems to the festival for the first time this year.

The hallmark of the Montreux Jazz Lab is its ability to bring artists together, melding their musical universes into a unique creation for one special evening. On 6 July, Mercury-Prize winner Michael Kiwanuka, Black Pumas and Gabriels will combine for an amazing evening of neo-soul that promises to deliver untold levels of sensuality and groove. The following day will feature the most sought-after saxophonist at the forefront of the burgeoning new wave of London jazz, Nubya Garcia, viral sensation Marc Rebillet, and “the Grace Jones of jazz”, Lady Blackbird. The new voice of British Soul, BBC Sound Of and BRIT-Award-winner, Celeste, will join Stormzy on the Lab’s lineup for an evening of UK talent. After enchanting the audience at the Lake Stage last summer, Sophie Hunger, Dino Brandão and Faber will be back to open the festival, this time performing their solo projects. One of the most exciting talents to emerge from the UK in recent years, Arlo Parks will be gracing the Montreux Jazz Lab,
with her remarkably passionate lyrics and infectious style of pop, hot on the heels of her triumph at last year’s Mercury Prize. Self Esteem, who continues to gain plaudits for her incisively honest lyrics, will also perform following the brilliant reception for her latest album “Prioritise Pleasure”. Making his debut at the Montreux Jazz Festival this year is the UK’s most innovative young jazz drummer and producer Yussef Dayes. Having studied under Billy Cobhan (Miles Davies’ drummer), Dayes’ sound pushes beyond genre strictions melding together everything from 70s funk to UK grime.

Back in full swing this year, the Montreux Jazz Festival also reveals its brand-new format for the 56th edition. Along with the festival’s two iconic venues, the Auditorium Stravinski and the Montreux Jazz Lab, festival-goers will be treated to an array of activities, stages and terraces along the waterfront. An important new edition to the festival this year is the Lake House, which will be the beating heart of the event. This large three-story residence will play host to ten enthralling rooms, each offering a unique experience. Open 24 hours a day, the public will be able to wander freely, enjoying unique experiences ranging from the musical, visual, educational or technological. With bars and lounges on each floor, this large house will be a perfect place to enjoy the festival in a lively and intimate setting. Every day until 5am, the Coupole and the Loggia will be the festival’s top night-time hangouts, with DJ sets. A small quasi-secret room, L’Alcôve will host daily podcasts with prominent guests. Kitted out with cutting-edge sound and visual facilities on the middle floor, the Cinema and the Library, will invite the public to delve into three outstanding artistic collections – more than 300 Live at Montreux vinyls, numerous videos of festival concerts and Switzerland’s largest collection of books on jazz and current music. The Boudoir and the Gallery will complete this floor with projects themed around innovation and new technologies. On the ground floor, an American jazz club, the Memphis, will be dedicated to jazz music in all its forms. The atmosphere will change throughout the evening, with workshops and creations, concerts by up-and-coming groups and the legendary jam sessions.

The Montreux waterfront will once again come to life with food stands, terraces and bars. The 56th edition will offer five free stages, in addition to the Lake House. The Parc Vernex is morphing into a beer garden, an open-to-all venue in which festival-goers can bask on sun loungers and make use of all play areas in the afternoon. In the evening the Parc Vernex will host concerts by some of the most exciting emerging artists on the Super Bock Stage. An open-air nightclub, the Ipanema will host emerging international DJs right at the water’s edge – the ultimate place to party at sunset or under the stars. Continuing the free stage offering, the Lisztomania will explore emerging trends in all kinds of styles, with concerts every night until midnight. The Terrasse ibis MUSIC, will evolve throughout the day as a bar and a laid back vibe in the afternoon, followed by intimate electro-pop performances in the evening and DJ sets at night. From dance classes in the afternoon to sizzling DJ sets in the evening, Latin rhythms and sounds are celebrated every day at El Mundo.

Lous and the Yakuza

John McLaughlin and the 4th Dimension with Jany McPerson