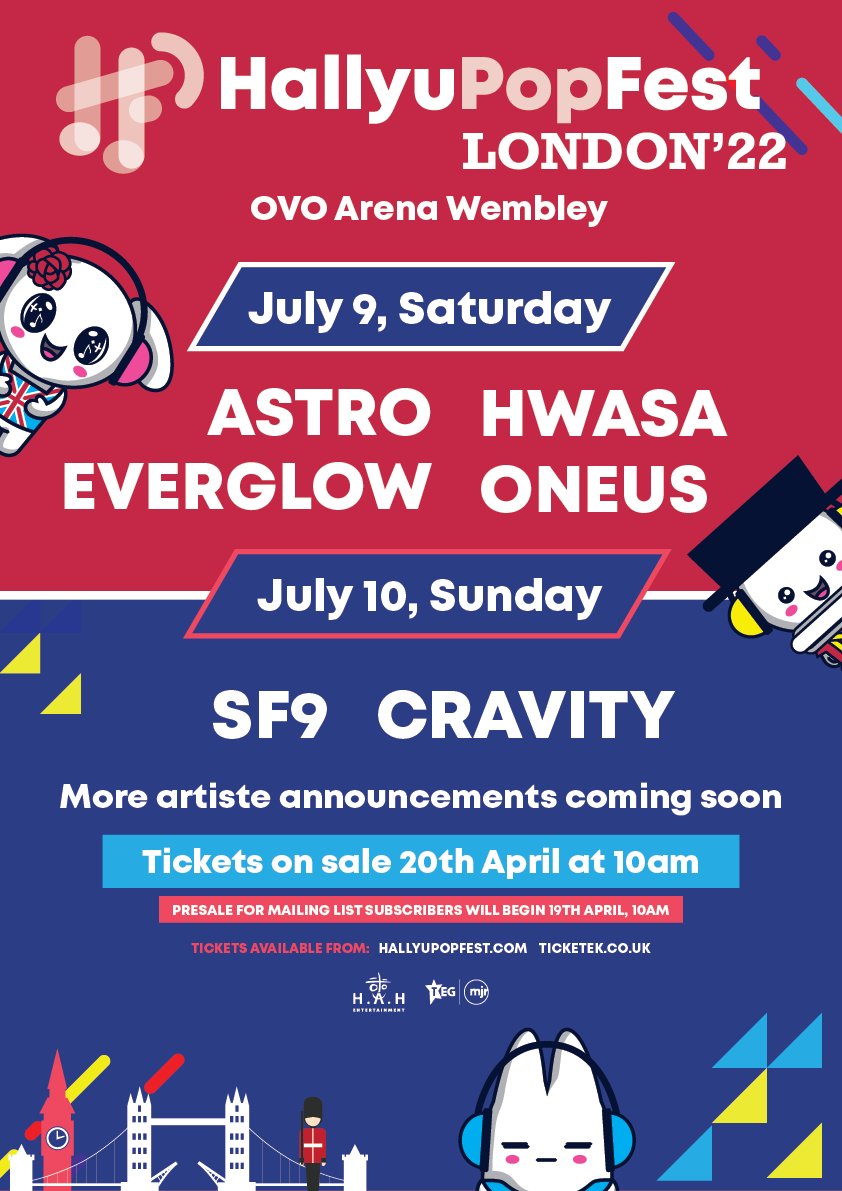 K-pop music festival, HallyuPopFest, will be making their first foray into London this July, following huge success as one of South East Asia’s largest Korean music festivals. The best of Korean music and lifestyle will converge at the electrifying K-pop extravaganza on 9-10 July at OVO Arena Wembley. The first wave of artists has been announced today, with ASTRO, EVERGLOW, Hwasa, SF9, CRAVITY and ONEUS, joining the bill. More headliners and artists will be announced in the coming weeks.

As one of South East Asia’s first and largest K-pop festivals, #HallyuPopFest was the most tweeted hashtag in Singapore in 2018, and together with the 2019 festival, saw a cumulative 40,000 attendees from all over Asia. Previous HallyuPopFests  have seen K-pop artistes such as NCT 127, Monsta X, Super Junior, Wanna One and Taeyeon play. This year’s UK edition of the ‘Korean Wave Movement’ promises to be another spectacular event, with more unstoppable entertainment for K-pop fans.

The festival will see a stellar line-up of Korean idol stars performing across both days, with hugely popular boy bands ASTRO, SF9 CRAVITY and ONEUS, incredible girl group EVERGLOW, and massive popstar Hwasa, who originally became famous with girl group MAMAMOO, already announced. Stay tuned for even more Korean superstars who are going to light up the stage.

Each event day, festival-goers get an all-in-one, day-to-night experience, starting with activities at HallyuTown. Showcase performances by up and coming K-pop and indie artistes, the Red Carpet event, Artist Engagement opportunities and finally the spectacular Evening Concert featuring the headline acts. The artiste line-up will boast a total of 14 performing acts across 2 days, all performing to creative visuals and effects to give fans an unforgettable magical experience.

This year’s first HallyuPopFest event in London, fans will be treated to the best of all things Korean. HallyuTown will function as the main festival square, and will be open to the public, offering a variety of Korean-centric booths and activities featuring K-Food, K-Beauty and K-Lifestyle.

HallyuPopFest is brought to the UK by global promoter TEG MJR, who specialises in UK events, and H.A.H. Entertainment, a global entertainment company whose HQ is in Singapore. HallyuTown, a market place component of HallyuPopFest, is supported and hosted by MBC, Korea’s National Broadcaster and KOFCA (Korea Foundation for Cooperation of Large & Small Business, Rural Affairs).

“HallyuPopFest came about because we wanted to create a festival experience where K-pop fans from all over, from various fandoms, could come together and celebrate their fervent idol support, boundless energy and love for music and dance that are the cornerstones of K-pop,” said Selena Ho, CEO of H.A.H. Entertainment.

Mr Choi of MBC said: “We are delighted to be part of HallyuPopFest. MBC will be hosting and organising HallyuTown, bringing over 30 booths from South Korea, promoting and selling everything from beauty to food to electronics. It will be incredible to be part of the UK’s first ever K-pop festival.”

Richard Buck, CEO of TEG MJR, said: “We are so excited to bring HallyuPopFest to London for the first time. It will be the UK’s first K-pop festival, as well as HallyuPopFest’s first global landing. It’s an amazing line up, consisting of a diverse variety of Korean music genres, from pop to rap to adult contemporary to indie artists. There will be something for everyone.”

Every ticket gives festival goers access to two concert events per day – the Afternoon Showcase and the three-hour Evening Concert where headliners will perform individual sets. The shows have been described as a concert within a concert. All the artists have promised to deliver their hits as well as new songs. There will also be a Hi-Wave Meet and Greet for fans and artists to meet within close proximity, but adhering strictly to Covid guidelines.

The first HallyuPopFest in the UK is going to be a weekend to remember. Not only will there be some of the biggest names in Korean music performing, but it will be a chance for UK fans to immerse themselves in Korean music and lifestyle, and fully embrace the Korean wave.

Tickets for HallyuPopFest 2022 go on sale as follows:

More details to be announced via HallyuPopFest London 2022 socials and website: