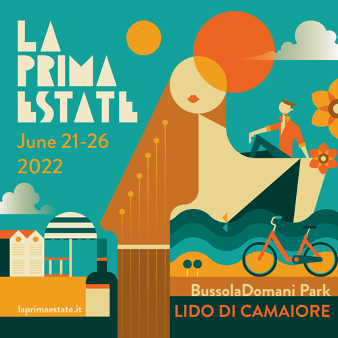 La Prima Estate, the brand-new Italian seaside festival, have announced the completion of its unmissable line-up for their debut edition, alongside unmissable daytime programming, late night entertainment and much more. Set by the picturesque Tuscan seaside for the ultimate Italian festival vacation, the newly announced support acts will join a raft of incredible headliners taking to the stage for the 6-Day festival from 21-26 June 2022. The first edition of La Prima Estate will be held in BussolaDomani Park in Lido di Camaiore.

Following the success of Lucca Summer Festival, Italian promoters D’Alessandro and Galli proposes a new event formula based on a new festival concept, combining music, vacation, and fun, summarising it with its slogan ‘It’s more than a music festival. It’s a holiday experience’.

Across six days, international artists and some of Italy’s most loved musicians will take to the stage in a truly unique location, just 50 meters from the sea in the heart of Tuscany. The stellar line-up includes alternative rock artists The National, electro dance by Jamie xx and Bonobo, timeless pop from Duran Duran, Grammy-winner Anderson.Paak and his band The Free Nationals, Courtney Barnett, Easy Life, Jungle, Beabadoobee and some of the most interesting rising stars of the Italian music scene Cosmo, La Rappresentante di Lista and Giorgio Poi.

Speaking about playing the festival this year, The National said: “Any chance to visit Tuscany is hard to resist. We are thrilled to be invited for the La Prima Estate Festival and look forward to seeing our Italian fans in June.”

Kicking off the festival’s opening night will be the Argentinian indie rock band El Mató a un Policía Motorizado, produced by Primavera Labels. The collaboration builds a bridge between La Prima Estate and the iconic Barcelona festival, which is undoubtedly one of the inspirations for the Versilia event.

On top of the incredible performances on the Tuscan beach, from midnight till dawn Wednesday to Saturday, Versilia’s vibrant nightlife will keep the party going with ‘La Prima Estate OFF’, a series of after shows at iconic Versilia’s nightclubs, hosted by the pioneering Apollo Club from Milan, with DJ Tennis, Cassius and MACE keeping revellers dancing until the morning light.

La Prima Estate will not only play host to an extraordinary music line-up, with four artists taking to the stage each night in the spectacular Bussola Domani Park in Lido Di Camaiore, Versilia, but also promises beach, relaxation, lots of fun and a memorable holiday experience. The festival will feature unique experiences in an unparalleled setting, combining music, local culture, food, art, nature, mindfulness, sports and nightlife.

Lido di Camaiore will transform into an idyllic village, packed with unique experiences with something for everyone, including a cooking class on the beach, personally curated by the Michelin-starred chef Gennaro Esposito, themed on the intersection of food and music for an unforgettable culinary adventure. The beautiful beach will also play host to morning yoga, SUP courses and ‘Breakfasts on the Beach’, offering incredible experiences with La Prima Estate artists and other personalities from the music world at brand-new beach resort Santeria Belmare, just 200 metres from the festival site.

The Tuscan town will also welcome picturesque cycling excursions in the otherworldly Versilia hinterland led by professional cyclists, rounding out the extracurricular offerings with something for everyone.

Speaking about what makes La Prima Estate different to other festivals and the intention of being more than just a music festival, Mimmo D’Alessandro, CEO of D’Alessandro e Galli, said: “Our impression as promoters of live music is that for audiences today, just attending a concert is no longer enough: La Prima Estate wants to build on this desire, accelerated by the post-pandemic euphoria to fully enjoy free time, and combine an evening of live music with a series of experiences related to sport, the sea, food and other incredible activities during the rest of the festival goers’ stay. A new concept of a festival for which we consider Versilia and Tuscany to be the ideal place.”

Tickets for La Prima Estate, including day tickets and multi-day tickets, as well as early bird holiday packages, via www.LaPrimaEstate.it, TicketOne or Dice