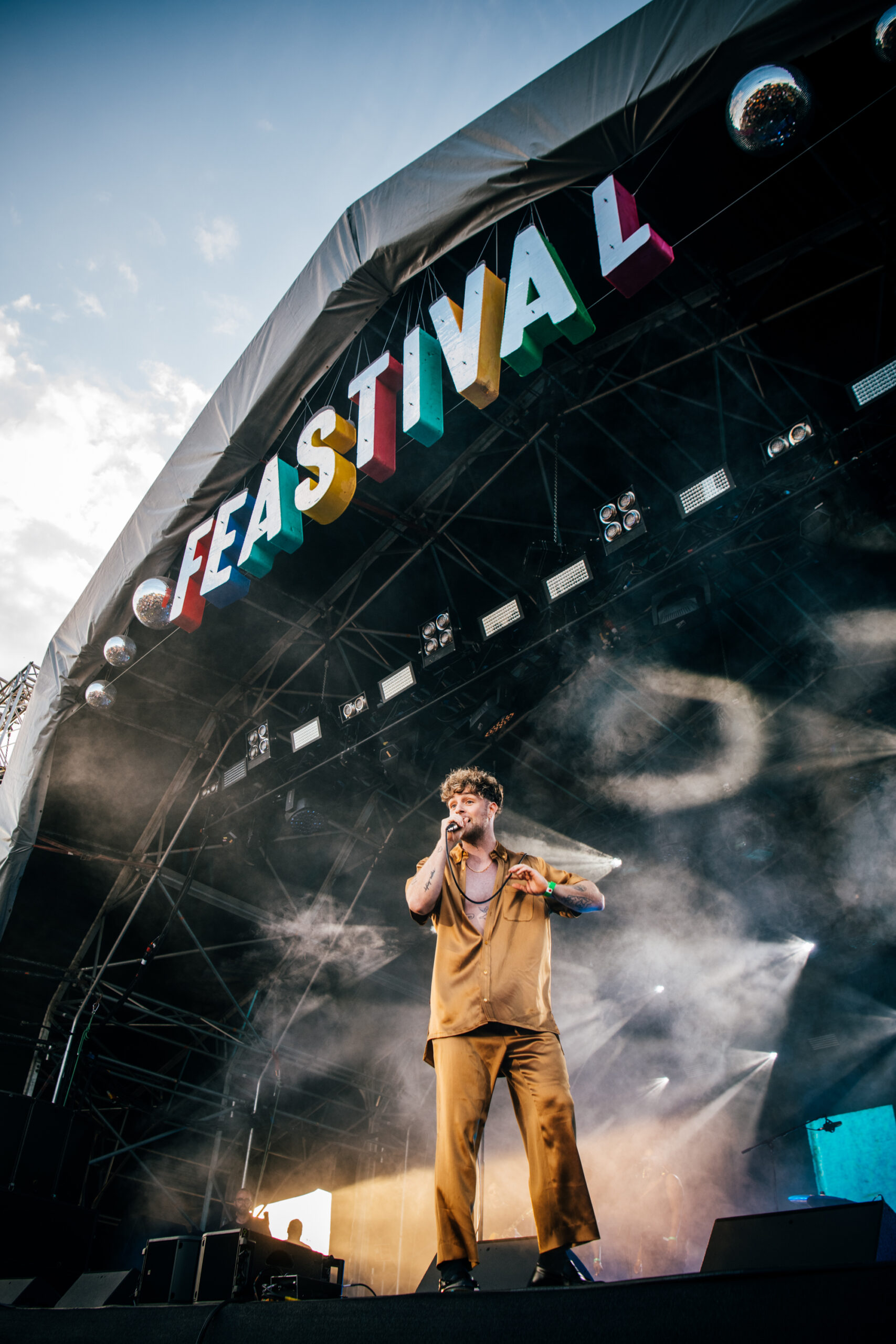 Big Feastival, proudly presented by M&S Food, today announces brand-new additions to its unmissable line-up of music, food and family entertainment, as the festival returns to the Cotswolds this summer from 26-28 August 2022. Hosted at Alex James’ Farm, the August Bank Holiday festival is once again bringing the very best of live music, critically acclaimed chefs, award-winning street food and an unrivalled programme of family entertainment.

Joining Big Feastival’s epic music line-up is one of the biggest hitmakers in the UK, producer and DJ Jax Jones, who will kick off the party on Friday night with a spectacular DJ set. Having sold more than 40 million records worldwide, garnering over 20 million monthly listeners on Spotify and topping the UK dance charts again and again, Jax Jones is set to bring the dancefloor to the farm with his house and electronic-focused bangers.

House Gospel Choir will also be raising the roof on Friday with their electrifying House meets Gospel experience, which never fails to get the crowds dancing and singing along. Even more incredible music will come from London-based, Melbourne-bred singer-songwriter Thomas Headon, pop sensation and rising star Dylan, as well as Gracey and her brilliantly relatable and catchy pop gems. Featured on 220 Kid’s viral hit ‘Don’t Need Love’, Gracey has not only scored a Top 10 UK single, but also earned herself a BRIT Award nomination, fully establishing herself as the unstoppable new voice in UK pop.

Matilda Mann and her captivating vocals and interesting storytelling, which earned her support slots for the likes of Arlo Parks, Beabadoobee and The Staves, will be making her Big Feastival debut on Saturday, while Manchester based singer-songwriter Tim Gallagher, whose soulful style is inspired lyrically by country and influenced melodically by R&B, is joining the Sunday line-up. Also taking to the main stage will be the legendary CBBC presenters Dick & Dom with what is set to be an incredible DJ Battle for all the family to enjoy, as well as 80s Aerobics sensation Lycra 80s Party, who will bring the party and dance floor to the farm with their ultimate 80s Aerobics Dance Show, opening the main stage on Sunday with an aerobics warm up before taking to Alex James’ Cheese Hub for a truly unique DJ set and a spectacular 90s rave set on The Bandstand.

Musical treats will also return to one of the festival’s most beloved destinations, Alex James’ Cheese Hub, with legendary DJs Jeremy Healy, Jaguar Skills, Plump DJs and Freestylers taking turns behind the decks, as well as guest sets from Dick & Dom, DJ BBQ, and Feastival host Alex James across the weekend.  Other newly announced music highlights include The Bandstand presented by heycar, as well as the BBC Introducing Stage, which will be showcasing some of the very best in new music.

The Big Feastival also announces the next round of chefs to join the line-up, including one of the world’s most respected chefs, Clare Smyth MBE.  Clare is the first British woman to be awarded three Michelin stars.  She owns the prestigious Core restaurant in London and Oncore in Sydney, which both offer exceptional dining experiences and have received numerous accolades since opening.  Her first book, CORE debuts this summer. Tom Barnes, the mastermind working alongside Simon Rogan in his three Michelin starred L’Enclume and ‘Great British Menu’ finalist is set to wow the crowds with his elegant cuisine, built from his training in Belgium under The Roux Scholarship. British/ Indian chef Romy Gill will also appear, a regular and much loved chef on BBC1’s Ready Steady Cook. Chris Baber is also confirmed, he has worked under critically acclaimed Michelin-starred chef Atul Kochhar and won the 2016 series of BBC One’s popular cooking competition Yes Chef. A consultant for M&S Food, Chris creates weekly family recipes and is the face of their ‘Fresh Market Update’ TV adverts, a campaign which reaches millions of people across the UK. With over 200,000 followers across his social media platforms, Chris gives his followers the confidence to get in the kitchen and cook his easy recipes – One of his proudest achievements is the ‘Chris Baber Cooking School’ which provided free cookalongs to children during lockdown. Social media sensation Eloise Head aka Fit Waffle will showcase the simple, quick and delicious recipes that have earnt her millions of online followers – her success continued this year with the release of her debut cookbook ‘Baking It Easy’, which currently sits at the top of multiple baking book charts. Vegetable chef extraordinaire Kathy Slack will impress audiences with her recipes solely focused on the wonders of the home veg patch, while ‘Great British Bake Off’ star and Steph’s Packed Lunch regular Ruby Bhogal will return to host The NEFF Big Kitchen.
Feast On The Farm, the perfect memory-making moment for those attending with their friends, families and loved ones, has also newly announced its not-to-be-missed menu. Guests can expect a culinary fare cooked over fire with dishes such as smoked cauliflower with seaweed romesco dressing, Porthilly Oysters and flame seared sirloin of beef.  Priced at £15 for brunch, £55 for lunch and £65 for dinner, with drinks included for those of age, this experience is sure to bring the Cornish culinary scene and its rural flavours straight to the Feastival farm. Tickets are also available for under 18s. Elsewhere, The VIP Garden, presented by the iconic Moët &Chandon, one of the world’s most prestigious champagnes, will be offering the perfect place for guests to relax and enjoy the Feastival atmosphere in style.

New to Big Feastival’s incredible family entertainment programme for 2022 will be a brand-new BBC CBeebies Bedtime Stories stage, recreating the iconic BBC CBeebies show and bringing some of the UK’s most loved stars and entertainers to the Cotswolds for a special stories treat.  Elsewhere, the humours and mishaps of living on a farm will be showcased by the talented Farm Yard Circus, whilst 8-piece band Das Brass will inject funk into the fields and will get the whole family dancing. Activities continue for the little ones with the new Crafty Corner, which will host a series of workshops and classes for kids to learn new crafts featuring Aardman Animations, The Makery and Spare Room Arts. Alongside family favourites such as Under The Bed Theatre, Jitterbug Circus, and Big Feastival’s Got Talent, which will shine the light on the little stars of tomorrow.

A chance to step away from technology for little ones and get hands on within a new field for 2022, Hidden Hollow. Going back to basics with woodland and nature play, discover this beautiful wild location filled with Den Building, Tree Climbing and Big Feastival’s very own nature school Little Explorers Club.

Also debuting at Big Feastival 2022 is the GROW Garden, offering children and parents alike the chance to learn, experience and taste the wonders of growing your own produce. GROW is an initiative founded by TV presenter George Lamb, the charity works with schools and communities to connect with nature and arm children with tools to manage their mental and physical wellbeing through activities such as sustainable food growing, farming and meditation. Big Feastival is a proud charity partner of GROW.

Finally, Big Feastival will be announcing a brand-new area of the festival which will host live music and fire food activities throughout the weekend, as well as being the brand-new home for Feast On The Farm. Expect a slower pace in this beautiful part of the site with brilliant live blues music, the crackle of our wild campfire, pop up performances and expertly grilled goodness from first class BBQ street food.

With even more entertainment still to be announced, the Big Feastival promises to be the most fun-filled weekend of the summer! For full information on the programme and to purchase tickets, visit: www.thebigfeastival.com