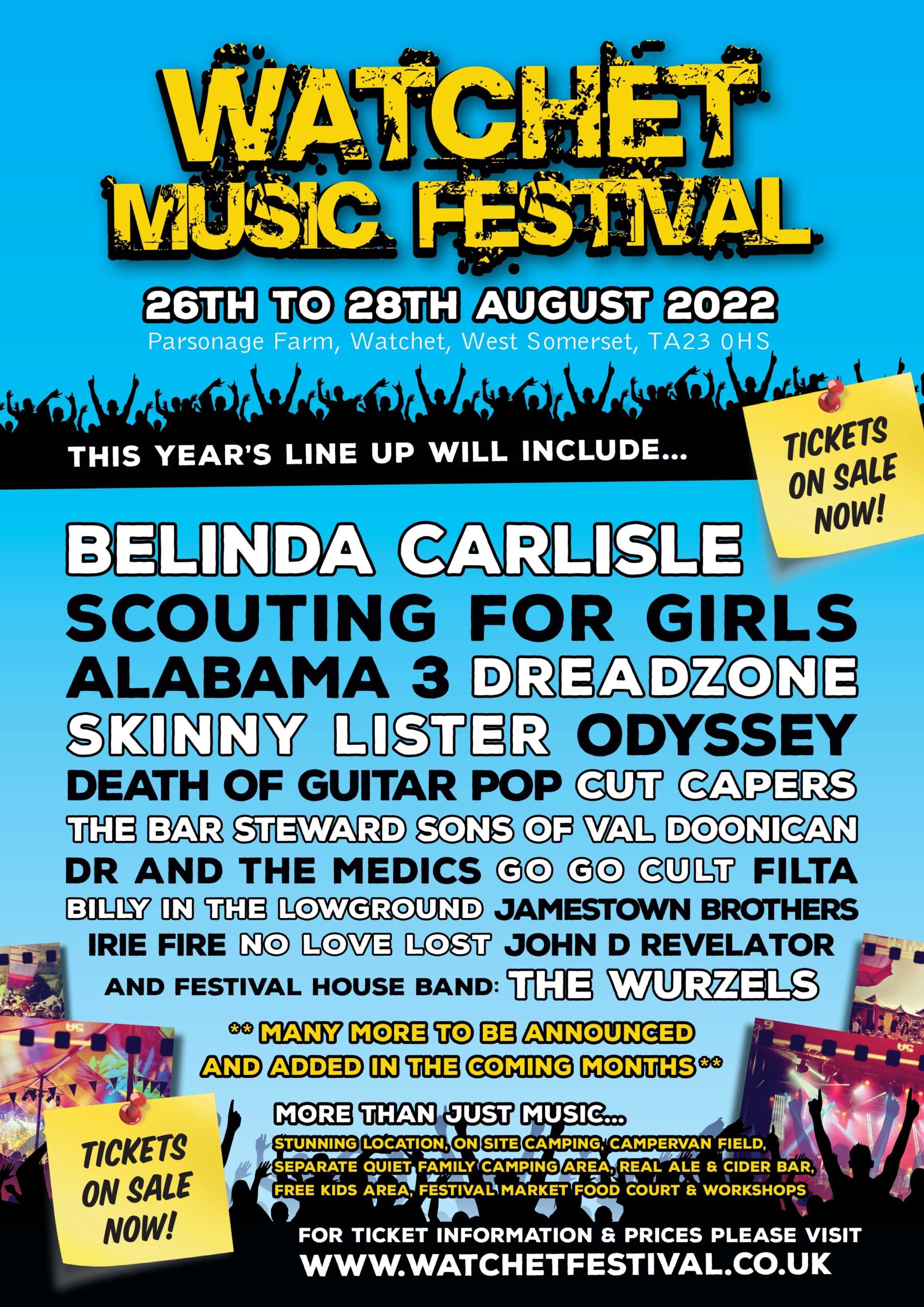 Having enjoyed a triumphant return in 2021 after a COVID-enforced hiatus, the Queens Award-winning Watchet Festival will again return to its beautiful West Somerset site in 2022. With full weekend camping tickets costing less than £100, Watchet Festival remains one of the very best value festivals in the UK.

Saturday night headliners The Fratellis are a Scottish indie rock band from Glasgow. The band consists of lead vocalist and guitarist Jon Fratelli, bassist Barry Fratelli, and drummer Mince Fratelli. Over the course of their 17-year career they have enjoyed three Top Ten albums. Their numerous Top 40 singles- include the iconic “Chelsea Dagger”, which has also become a beloved anthem at The Darts.

At the beginning of their career, Sunday headliners Level 42 were squarely a jazz-funk fusion band, By the end of the 80s, however, the band whose music is instantly recognizable from Mark King’s thumb-slap bass technique had crossed over to the point where they were often classified as danceable sophisti-pop, equally likely to be placed in the context of Sade and Style Council. The band’s commercial peak came in the mid-80s with two iconic albums World Machine and Running in the Family (which spawned hit single “Lessons in Love”, which reached number three on the UK Singles Chart), but they have continued to record and tour for more than 40 years!

Making her debut appearance on the festival’s hallowed main stage, Friday’s headliner is none other than 80’s pop legend and recent Rock N Roll Hall Of Fame inductee, Belinda Carlisle. With a career spanning over forty years, covering stints in both the Go-Go’s (one of the most successful all female alt-bands of all time), and as a hugely successful solo artist, Belinda Carlisle will dazzle the Watchet Festival crowd with hit after hit, including the utterly iconic, Heaven Is A Place On Earth.

Returning to Watchet due to massive popular demand are Friday’s co-headliners Scouting For Girls. Scouting For Girls are responsible for a huge number of indie-pop classics such as She So Lovely, Elvis Aint Dead and This Ain’t a Love Song.They’ve sold over 2,000,000 records and have been nominated for no less than four Brit Awards and an Ivor Novello.

Also returning to Watchet after barnstorming performances in previous years are the mighty Dreadzone; the self-titled Greatest Show On Earth (in tank-tops) aka the Bar Steward Sons Of Val Doonican; and Alabama 3, the Brixton-based acid-country band best known for writing the legendary theme from The Sopranos.

Acts joining the always eclectic Watchet line up for the first time include Bristol’s very own hip-hop & funk infused 8-piece brass band Cut Capers who will bring the festival to a close, headlining the Udder Stage on Sunday night.

Folk-punk troubadours Skinny Lister will tear up the main stage on Saturday evening with the same blast of high octane energy that has powered them for hundreds of live shows across the UK, Europe and the US including a prestigious slot at Coachella.

With numerous main stage acts, including Saturday’s headliner still to be announced, 2022 is gearing up to be the biggest in Watchet Festival’s history.

Watchet Festival is a not-for-profit family festival with amazing views of the West Somerset coastline and beyond. Three live stages host more than 100 live acts, bringing a wide range of high-calibre musical acts not normally found performing in West Somerset, at a very affordable price. Full Adult weekend camping tickets are under £100, less than half the cost of many comparable festivals. Watchet 2022 is set to continue the festival’s tradition of completely selling out in advance. The traditional discounted early-bird release sold out in minutes, and half of the festival full capacity have been sold, this incudes 75% of the camping allocation. Campervan tickets have already sold out. Alongside an incredible line up and a wide variety of high-quality food stalls, the extensive in-house Cider and Real Ale prices are kept as low as possible, providing one of the best-value refreshments offerings to be found at any event in the UK.

Watchet Live CIC, the charity behind Watchet Live Festival who run the festival on an entirely voluntary basis, are proud recipients of the Queen’s Award for Voluntary Service; the highest award that can be given a volunteer group in the UK.

Accompanied children 12 and under attend for free – no advance ticket required.