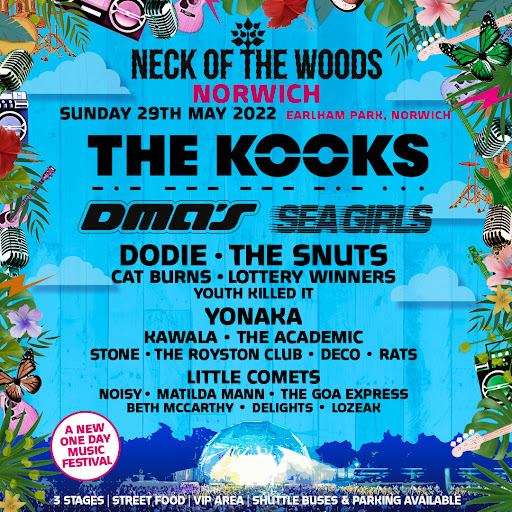 Neck of the Woods Festival

Opening the 2022 festival season this Spring, Kilimanjaro Live is pleased to present a brand new festival:
NECK OF THE WOODS
Staging the nation’s finest indie and alternative sounds right on your doorstep, the one day festival will be popping up in East Anglia for the very first time on Sunday 29th May 2022.
With acts appearing across three stages, 14,000 music fans will descend on Earlham Park, Norwich for a day of incredible live music.
Headlining the Main Stage of the inaugural Neck of the Woods will be… THE KOOKS. Over the years, The Kooks have proven themselves to be pillars of the UK indie pop world. Celebrating the 15th Anniversary of their iconic debut studio album ‘Inside In/Inside Out’, the band will be reminding the Neck of the Woods crowd exactly why its songs are still the soundtrack to a whole generation of young people.

Sizing up a tasty mid-afternoon slot, THE SNUTS will also be tearing up the Main Stage with a set of their arch alternative-rock. Becoming the first Scottish band to earn a No.1 position in the UK’s Official Albums Chart with their seismic debut last year, the West Lothian four-piece will be offering a tantalising opportunity to hear new music from the much-anticipated follow-up to ‘W.L.’.
Other special guests across the Main Stage will include Sydney rock stalwarts DMA’S; Sony signed star-in-the-making CAT BURNS; a high-energy performance filled with jagged love songs from South London’s SEA GIRLS; a set of musically ambitious and dreamily intimate indie-pop from dodie; plus momentous guitar pop melodies and wistful lyricism aplenty from THE LOTTERY WINNERS.
PLUS, getting the festival off with a bang, local legends and “indie-rock social hand grenades” YOUTH KILLED IT will be launching the first-ever Neck of the Woods with an unmissable opening-set.
Over on the Second Stage, attendees will have the opportunity to catch Irish indie-rock frontrunners THE ACADEMIC as they bring the songs of 2021’s acclaimed ‘Community Spirit’ EP and favourites from their Irish No.1 charting debut to the festival. Additionally, Brighton band YONAKA will be topping the bill with their bruising brand of alt-rock. Elsewhere, KAWALA will be bringing danceable afrobeat-inspired rhythms aplenty, CRAWLERS will be demonstrating why they’re one of Liverpool’s hottest bands of the moment, plus there’ll be must-see sets from THE ROYSTON CLUB, STONE, DECO and RATS.

Offering plenty of opportunities to catch the stars of tomorrow over on Stage 3, expect to be introduced to the psych-umbrella’d rock’n’roll of THE GOA EXPRESS, the refined songcraft of BETH McCARTHY; not to mention rapidly rising artists like NOISY, DELIGHTS, MATILDA MANN and more, plus a set from long established indie pin-ups LITTLE COMETS.
Neck of the Woods will also be placing the spotlight on some of East Anglia’s brightest new acts, with Norwich’s own LOZEAK confirmed to be appearing, plus that opening set on the main stage from local legends YOUTH KILLED IT.

Further names to be announced shortly…
In addition to the music, boutique street food stands and bars across the site will be catering to all needs from day til dusk.
Standby for further news and updates as the debut Neck of The Woods prepares for take-off.
* * * * *
NECK OF THE WOODS 2022 LINE UP
Main StageThe KooksDMAsSea GirlsDodieThe Snuts Cat Burns Lottery WinnersYouth Killed It
Stage 2YonakaKawalaThe Academic StoneThe Royston ClubDecoRats
Stage 3Little Comets NoisyMatilda Mann The Goa ExpressBeth McCarthyDelightsLozeak
* * * * *
TICKETS & INFO
Neck Of The Woods will take place @  Earlham Park, Norwich – 29 May 2022
Tickets are priced at £45 (+Booking Fee) and on sale now!
Tickets:https://www.neckofthewoods.co.uk