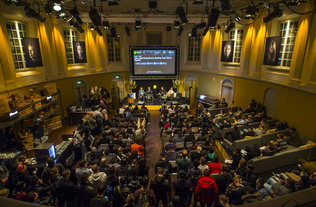 The Amsterdam Dance Event (ADE) is gearing up for a full return to live in 2022, with a revamped, interactive approach for ADE Pro conference and ADE Festival returning to the nighttime. The first confirmed speakers for ADE Pro include Diplo, Sunnery James & Ryan Marciano, Suzanne Ciani and Youssou N’Dour, with Ciani and N’Dour taking centre stage with live shows during ADE Festival as well. Other artists confirmed for the festival program include; Afrojack, Armin van Buuren, Ben Böhmer, CloZee, DJ Stingray 313, Louisahhh, Oliver Heldens, Tiësto, Worakls Orchestra and many others.

ADE Pro’s long awaited 2022 return to its home base Felix Meritis will once again feature a live action packed program featuring in-depth sessions and discussions with an emphasis on interaction and immersion, with the first confirmed speakers including genre-defying global producer & DJ Diplo, the godfather of Africa’s current creative explosion Youssou N’Dour and modular synth pioneer and electronic music legend Suzanne Ciani. In addition, this year’s conference features Sunnery James & Ryan Marciano discussing their first album and a new documentary project, as well as IMPALA Executive Chair Helen Smith and serial entrepreneur Ben Turner, with many more speakers to be added in the following months.

Alongside their appearances at ADE Pro, Suzanne Ciani will also be showcasing her prowess live on the Melkweg stage in a one-off collaboration concert with Metropole Orkest, and Youssou N’Dour brings his band Super Étoile De Dakar for a live performance at Concertgebouw. Moreover, Melkweg is set to host a week-long program, with Dave Clarke Presents, Hospitality, Monstercat Showcase, Oliver Heldens and other shows and club nights. Paradiso presents French producer CloZee, as well as the return of Speedy J’s STOOR and Cloud 8 x Ziongate’s Tribes club night introduced last year, plus Gyedu-Blay Ambolley & his Sekondi band on the Tolhuistuin stage. In addition, DGTL announces live performances by Ben Böhmer and Worakls Orchestra, Alan Walker takes the stage at AFAS Live, Into the Woods and Dockyard x Mystic Garden return with multi-day events and Afrojack, Armin van Buuren, David Guetta, Tiësto and more are filling AMF’s roster at the Johan Cruijff Arena.

The first individual event tickets for ADE Festival will become available on the ADE website very soon. Alongside individual tickets, the ADE Pro Pass is currently available at Early Bird rates and grants access to the entire ADE program, including the full conference and festival, plus an abundance of networking events and opportunities for music industry professionals, full access to all ADE Business Hubs and much more.

The Amsterdam Dance Event (ADE), an initiative of Buma, has grown into the world’s largest and most influential club-based festival and conference for electronic music. The five-day event features every conceivable aspect of electronic music culture, with dedicated conference programming, an extensive arts & culture program, live music and DJ/artist performances, all spread across the city of Amsterdam. More information about ADE can be found here.