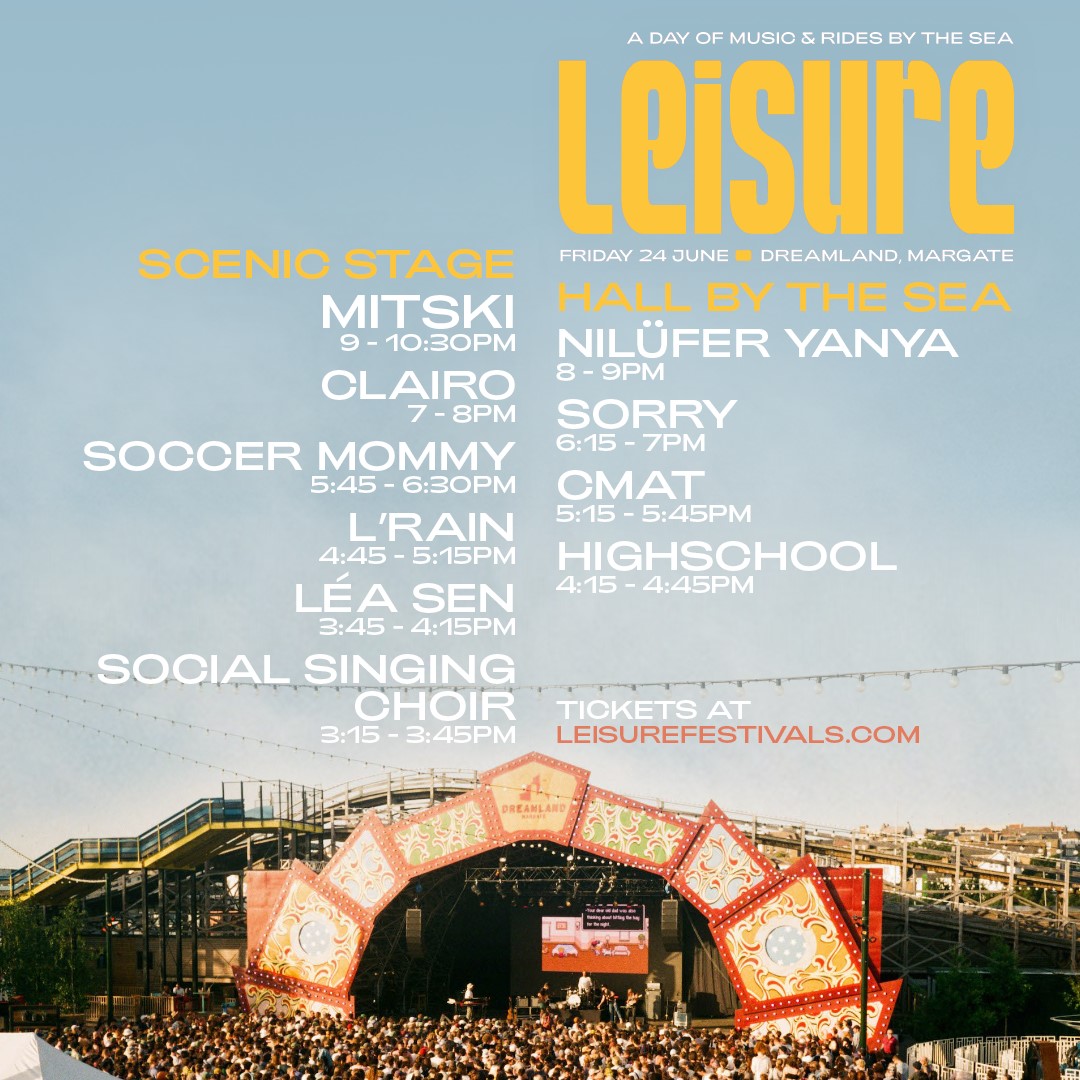 LEISURE festival has teamed up with Big Green Coach for the event. Day return travel can be booked from either London or Brighton here. They’re green, they’re affordable, they’ll drop you outside the gates before the music starts, and get you home safely at the end of the night.

The event, taking place June 24th at Dreamland, Margate features a slot from Mitski whose album Laurel Hell was released earlier this year to widespread critical acclaim, with The Guardian calling her “The best young songwriter in the US.” Clairo will bring her her atmospheric and graceful bedroom-pop for her (and Mitski’s) only UK performance this Summer outside of Glastonbury.

Elsewhere on the bill, Soccer Mommy provides captivating and candid lyrical insightfulness on what will be her album release day; Nilüfer Yanya, hot on the heels of lauded new album Painless promises her own blend of refined indie-pop; North London duo Sorry offer their unique and restless ode to city living; L’Rain will give us immersive experimentation and a glimpse into otherworldliness; and CMAT, the country-pop sensation from Dublin, will bring the singalongs.

Léa Sen whose sun-drenched avant-pop has made waves of late also joins the bill, as do Margate’s own Social Singing Choir – a supremely talented local community group who have worked with Swim Deep and recently opened for Self Esteem. Melbourne’s hotly-tipped and buzzy HighSchool complete the fully female line-up.

Tickets are on sale now, including a special group offer for 4 people, at just £170. Details here (all ages welcome):
https://dice.fm/partner/bird-on-the-wire/event/2g9go-leisure-mitski-soccer-mommy-more-24th-jun-dreamland-margate-margate-tickets

Following the success of BOTW’s 10-year anniversary event held in Margate in 2019 with Mac DeMarco headlining, LEISURE is set to become a staple in the gig goer’s diary. The total capacity of the event is 5000, utilising the outdoor Scenic Stage and the Hall by the Sea.  Amusement rides on site will be open, as well as the games arcade and roller disco. The event promises to evoke everything that makes the British seaside great, a mere 90 minutes from London, it’ll be a unique day out unlike any other UK festival.

LEISURE is a boutique event run by passionate independent promoters – a day of music and rides (with a sea view from the Ferris wheel!) set on the British seaside providing a unique opportunity for artists to play a significant yet bespoke festival. The ethos of the festival is to create an inclusive, inspiring and laid-back atmosphere, with artists split between two stages for a streamlined experience. While Margate, with its close proximity to London and thriving arts and music scene, provides the perfect backdrop to a festival that aims to move away from the frenetic pace associated with some day festivals.

On LEISURE, Bird On The Wire say: “We’re thrilled to finally return to Dreamland after such a brilliant day there in 2019. It’s a line-up that we feel passionately about and we couldn’t have hoped for a better headliner than Mitski for this first edition!“

Watch this space for more info on LEISURE Festival in the coming months.