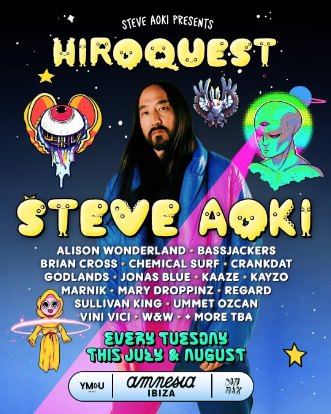 Two-time Grammy nominated DJ and Producer Steve Aoki has today announced the line up for his long awaited HIROQUEST residency and opening party at the legendary Ibiza club, Amnesia.

The celebratory opening party will kick off in true Aoki style and will be headlined by Steve himself along with an intergalactic line up including tropical house don, Jonas Blue, Kosovar-Albanian DJ and musician Regard and special guests.

Arguably the most quintessential of Ibiza clubbing experiences, Amnesia has long been the backdrop for some of the island’s most unforgettable clubbing moments. Two massive rooms – the Club Room, a dark, cavernous cauldron, and the Terrace, an expansive arena with a glass roof that is flooded with light when the sun rises – are guarded by the notorious Amnesia ice cannons that could strike at any time – an environment perfect for Aoki’s larger than life live show.