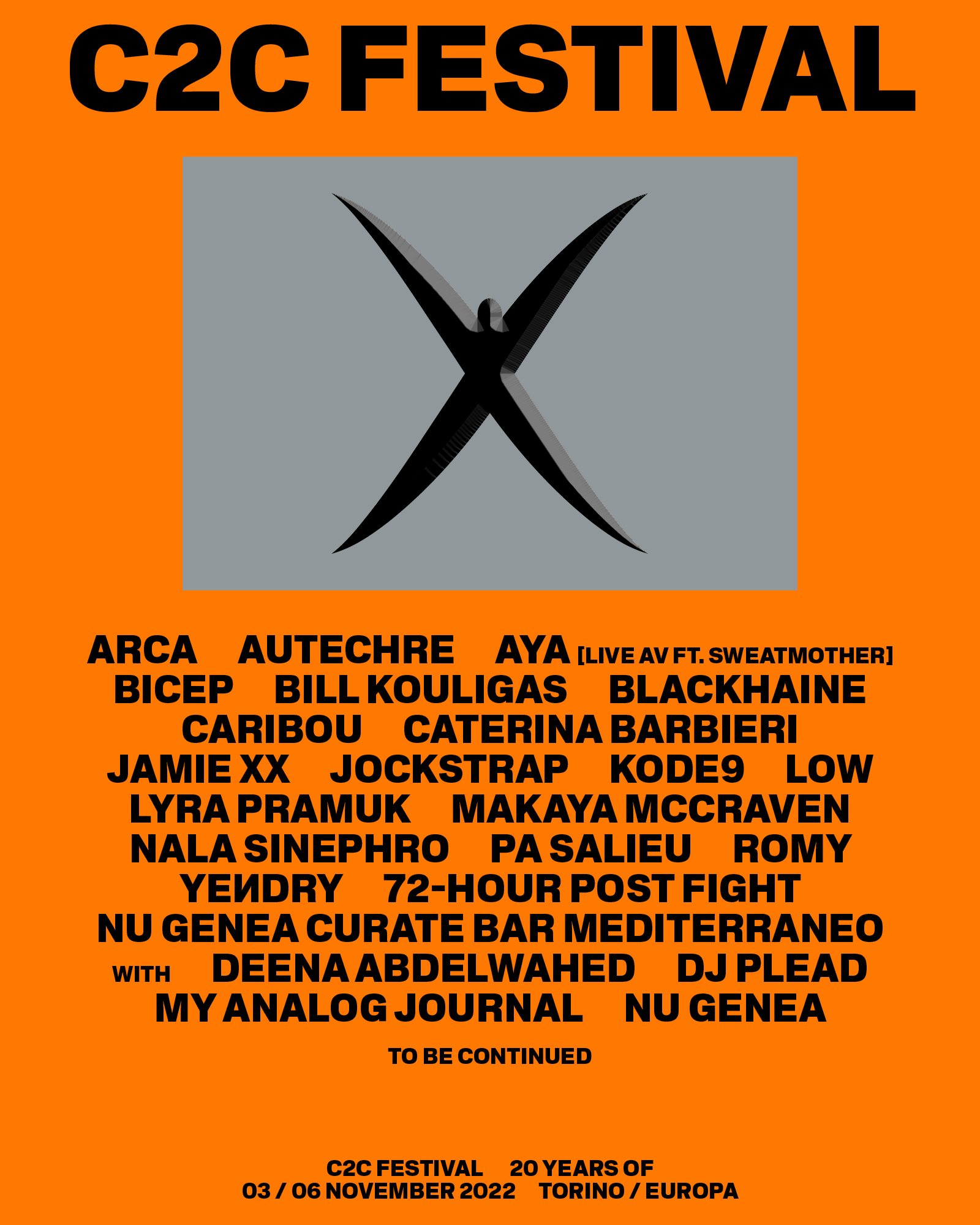 The twentieth anniversary event of C2C Festival will take place from 3rd – 6th November 2022 in Turin. More than 30,000 participants from all over the world are expected to attend the event which was recently featured in Pitchfork’s list of more anticipated festivals of 2022. C2C Festival flies the flag as the one Italian event on the list.

Born in 2002 as Club To Club, C2C Festival has showcased some of the very best of the contemporary music & art scene over the past two decades: adventurous evolutions of the avant-pop music scene in extraordinary locations. Global avant-garde, contemporary pop culture, transdisciplinary productions between music, art and technology, cultural independence, are the hallmarks of the twenty-year history of C2C Festival. C2C Festival will take place over four days among the various locations, the magnificent OGR and a return to the Lingotto in an unprecedented guise.

The scenography of the Stone Island Sound Stage has been designed in a way to challenge what a classic music festival stage can be. In referencing the world of performing art and contemporary theatre, the new stage will offer festival goers a bold new immersive and high-impact experience.

C2C Festival is proud to announce Stone Island as its strategic partner. In 2022, the collaboration goes from strength to strength with a series of events culminating in a new stage at C2C Festival’s 20th anniversary event in Turin. Their curatorial project: STONE ISLAND SOUND started in 2020 with a mission to support independent contemporary artistic production. By way of a harmonious set of playlists, record releases, environmental sound systems and live events, Stone Island Sound shines a light on evolving transglobal scenes, connecting the dots between musical communities and in doing so endeavours to build a world sound map.

On Friday 4th November, the Stone Island Sound Stage will host two shows by Bill Kouligas and Kode9. Producer, DJ and founders respectively of two seminal labels in the European avant scene, PAN and Hyperdub. They will be joined by Blackhaine, a choreographer and rapper who operates beyond the conventional, exploring the space between machismo rap, street poetry and experimental dance.

On Saturday 5th November, the Stone Island Stage will host Bar Mediterraneo, a special curation by the Neapolitan duo, Nu Genea and C2C Festival. Referencing the name of their latest album (released 27th June 2022) – Bar Mediterraneo is a sumptuous exploration of the contemporary musical culture of the Mediterranean.  The Stone Island Stage is also set to host the French Tunisian musician Deena Abdelwahed and Lebanese-Australian producer DJ Plead. Both authors of two original formulas that bring together the traditions of their countries of origin with the styles and expressions of contemporary club culture. They are joined by My Analog Journal, aka Zag Erlat, a Turkish music producer and selector based in London, famous for his research work on Anatolian rock of the 70s and for his exploration of rare, hidden and underrated organic grooves from different corners of the globe on vinyl.

Saturday’s line up on the Stone Island Sound Stage is in collaboration with two underground web based radio stations – Movement Radio from Athens which explores the cross cultural interactions of the Mediterranean and Ma3azef, the Cairo based online radio of the Arab world’s biggest music magazine.

On Friday 4th November, 72-HOUR POST FIGHT will take to the mainstage. The musical project of two producers, Palazzi D’Oriente and Fight Pausa flanked by drummer Andrea Dissimile and saxophonist Adalberto Valsecchi.  With their 2019  debut album, they experimented with elements of electroacoustic, downtempo and ambient music with that of  jazz, math rock, hip-hop and emo. Their live performances  often result in realtime improvisation sessions, always different from the last.

On Saturday 5th November, Caterina Barbieri and Romy will headline the mainstage. Italian-born, Berlin-based electronic composer Caterina Barbieri has an uncanny ability to distill the atmosphere of her time into a work of art. This is evident on her third album “Spirit Exit”, which was written and recorded in Milan in the midst of spring 2020 lockdown. Released on her own label light-years, the composer and virtuoso of the modular synthesiser introduces her voice for the first time.

Known for co-writing The xx’s hugely successful three albums as well as songs for Mark Ronson, Jehnny Beth, Benny Blanco and Dua Lipa, Romy’s career as a DJ has been on an upward trajectory for some time now.  These two passions come together on her 2020 single “Lifetime” (“One of the most euphoric pop songs of the year” The Guardian). Produced with Fred again and Marta Salogni, it marks the beginning of a bold and exuberant  solo path. C2C Festival is excited to welcome her back after her brilliant set in the 2019 edition.

Tickets for C2C Festival 20 Years Of are available on the Dice.fm ticketing platform via this link. 3 Days Pass: https://link.dice.fm/C8c61023415b

From May 30, early bird single tickets will be on sale for Thursday 3 November at OGR and for Friday 4 and Saturday 5 November at Lingotto.

The twentieth anniversary of C2C Festival is dedicated to two great artists who died in 2021: the avant pop producer Sophie, who played the closing show at the festival, at the Reggia di Venaria in 2019; and the iconic Italian singer-songwriter, composer and filmmaker Franco Battiato, who, on performing his album “Joe Patti’s Experimental Group”, in 2014 changed the perspectives of the festival forever. Both probably would have liked, for different reasons, the new symbol of C2C Festival.“Cambiano le prospettive al mondo

The new visual identity of the festival is designed by Studio Grand Hotel, a graphic studio established in Turin in 2020. The visual system uses the Metodo font, designed in Turin by Davide Tomatis and published by Optimo in 2021.