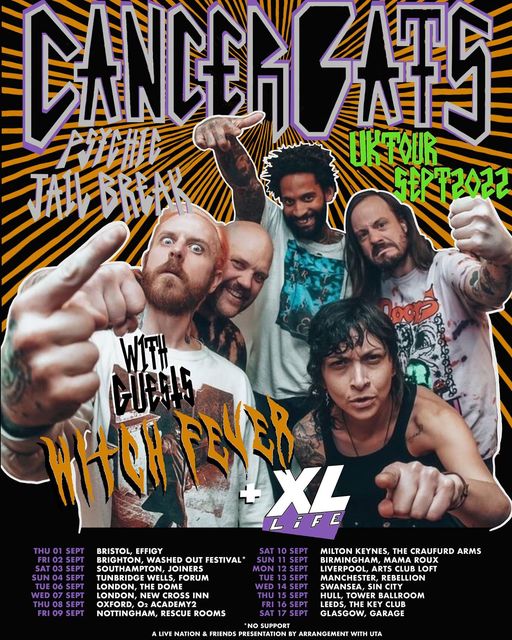 Following their storming shows at this year’s Slam Dunk Festival, Cancer Bats have announced a UK Tour for Sept 22.  They will be joined on the run by Witch Fever and XL Life.

Catch this incredible lineup at one of the following shows:

Tickets are available from:   https://www.cancerbats.com/live

Psychic Jailbreak follows 2018’s critically-acclaimed, commercially successful and JUNO nominated album The Spark That Moves and is the band’s first album to be written and recorded by the current lineup of Liam Cormier (lead vocalist), Jaye Schwarzer (bass and guitar) and Mike Peters (drums), following the departure of founding member and guitarist Scott Middleton. Produced by JP Peters (Propagandhi) at his studio Private Ear Recordings in Winnipeg, MB, Psychic Jailbreak sees the beloved metal stalwarts stepping up their game once again, eagerly pushing themselves both musically and lyrically beyond what they have achieved as a band to date.

“Psychic Jailbreak was written and recorded through the two years of lockdowns, the departure of a guitar player, and separation of the band due to travel restrictions within Canada,” shares drummer Mike Peters. “This was the longest we’ve ever taken to write an album and the least amount of time we spent in a room together in the writing process. It was tough to go from years of living on the road playing hundreds of shows a year to suddenly come to a grinding halt for two years. We put all the built-up aggression and energy into PJB!  It kept us sane! Now that gigs are happening and the album is out we are excited to smash ya’ll in the face with loud guitars and these new tunes!!”

The 11-track record features the electrifying title track “Psychic Jailbreak“, the punishing, southern-tinged banger “Lonely Bong“, the hard-hitting “Pressure Mind” and  “Radiate”, which V13 describes as a “sizzling three minutes featuring everything fans love most about the band, blast beats, lighting riffs, and snarling vocals landing the band somewhere between hardcore punk and crossover metal,” and Spill Magazine calls a “hardcore anthem that is sure to be a hit in the pit.”