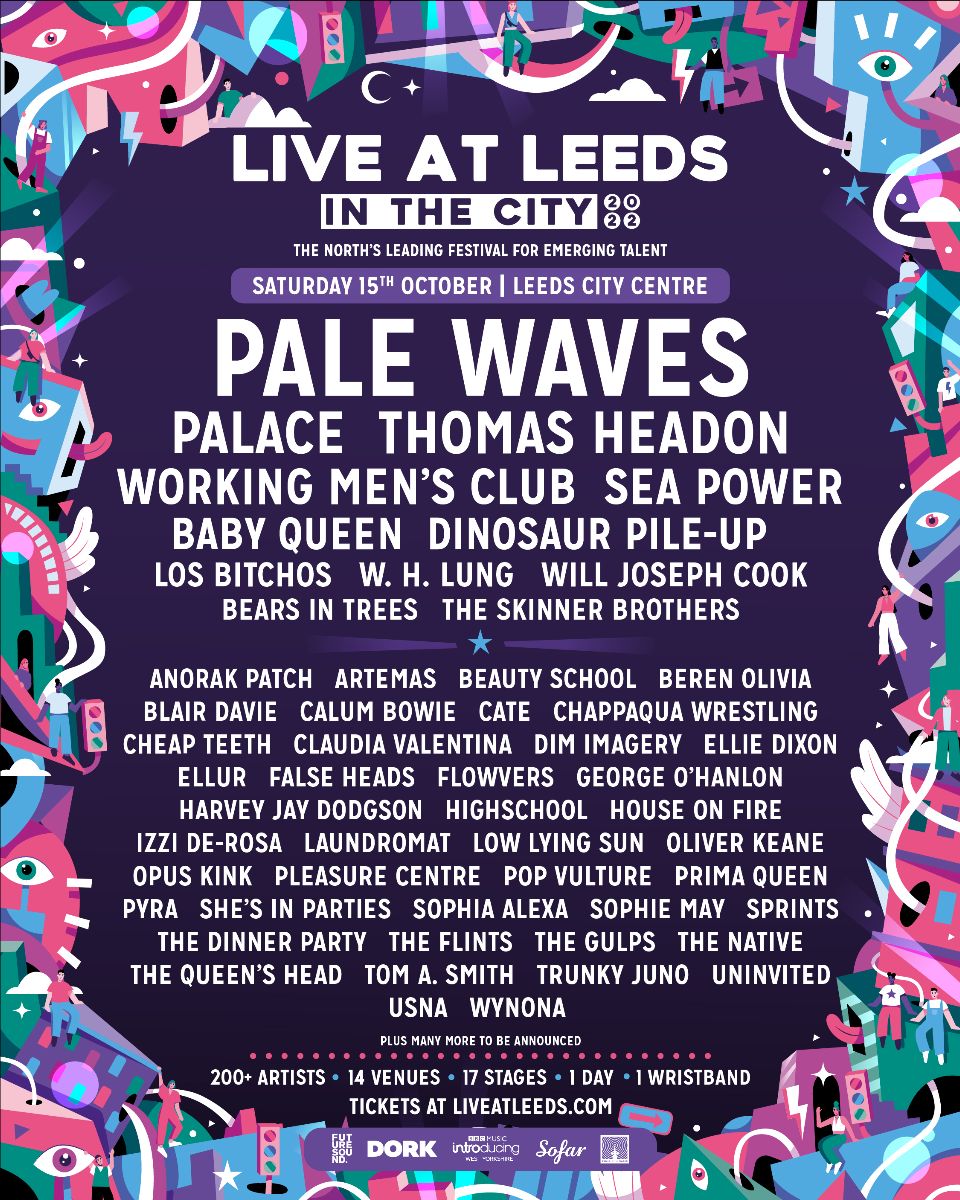 LIVE AT LEEDS: IN THE CITY announces October return

With Live At Leeds: In The Park making its huge outdoor festival debut earlier this month, the Live At Leeds year is set to continue with the beloved return of Live At Leeds: In The City on Saturday 15th October across Leeds City Centre. A leading home of all things new music discovery, where fans come to discover their next favourite artists before anyone else – this year’s festival is set to be an essential date in the diary for those looking to the sounds of 2023 and beyond!

Announcing over 50 names in its first wave of names, Live At Leeds: In The City returns with a bang. Leading this year’s festival lineup is a band who over the course of the past five years have grown into a driving force of modern guitar-pop in Pale Waves. Lead by the already iconic Heather Baron-Gracie, Pale Waves have become a live phenomenon that continue to grow and grow into an band defining the here and now with slick hooks, soaring indie-rock and passionate messages of acceptance and equality. Anthems like ‘Television Romance’, ‘Change’, ‘There’s A Honey’, ‘She’s My Religion’ and latest cut ‘Lies’ (taken from their upcoming third album ‘Unwanted’) are guaranteed to turn Live At Leeds: In The City into a goth-drenched celebration – rising through the Live At Leeds ranks to take their rightful place as headliners in 2022.

Carving an indie-pop world of his own, Thomas Headon continues his rise into 2023 and beyond with his set at Live At Leeds: In The City sure to see a packed room of fans desperate to see the future right in front of them, right now. Atmospheric indie-scapers Palace are sure to meld their own gorgeous set in the heart of Leeds City Centre this October, proving why they sell-out venues across the globe with their distinctly original sound, while the rave-inspired breakdowns of Working Men’s Club will touchdown at Live At Leeds: In The City for a pounding electro-punk takeover that needs to be witness in all its glory (especially with anticipated second album ‘Fear Fear’ sure to be a club staple by the time October comes around). Turning pop music on its head, Baby Queen is sure to be a highlight of Live At Leeds: In The City 2022 – proving why so many are signing up to the Baby Kingdom in their thousands with every performance and release, with latest cut ‘Colours Of You’ soundtracking TV shows and countless fans’ 2022 in the process, with the earnest pop-bops and smile-inducing indie gleams of Will Joseph Cook bound to be a joyous high-point of the Live At Leeds: In The City day too.

Returning to Leeds in October, Will Joseph Cook said:
“The Leeds audience brings so much energy, I’m always gassed to be playing a show in the city. Brudenell social club was my first headline show in Leeds and it slapped, good memories there.”

Across the board, Live At Leeds thrives with bringing those unmissable new names to the fore – travelling between different venues in the heart of one of the UK’s most celebrated musical cities to catch a glimpse of an artist that have become the talk of the new music world or simply stumbling into a venue to discover a band and a sound you may never have seen before. From the insatiable electronica of W.H. Lung and the bubbling grooves of Los Bitchos to the acts that when seen live take on a whole life of their own such as suave 80s weavers Highschool, bombastic party-favourites Opus Kink, alt-dreamers Prima Queen and the surging punk veracity of Ireland’s own Sprints amongst others. Whether it’s the immediate alt-kicks of Anorak Patch, Chappaqua Wrestling and Cheap Teeth, the punchy spins on guitar music in all its forms with Laundromat, The Queen’s Head, Trunky Juno, Uninvited, Flowvers, Pleasure Centre and Pop Vulture, the cinematic 90s-esque whirl of acts like Wynona or the undeniable pop supremacy bursting through from Claudia Valentina, Cate, Ellie Dixon and Beren Olivia amongst many others – there’s truly something for everyone to discover at Live At Leeds: In The City.

On playing Live At Leeds: In The City, Wynona said:
“We’re so excited to be announcing our first show in Leeds. This is an amazing event and line-up, showcasing so many talented emerging artists and we’re just so happy to be a part of it. Being from Reading, we have always felt a strange affinity with Leeds and its music culture due to us sharing the Reading/Leeds festival line-up every year- in a weird way, it feels like we’re all experiencing it at once, despite the distance! For us to get to travel and perform there for the first time is special to us”

Rising star Cate said:
“I can’t wait to play Live at Leeds !! It’ll be the first time I play my new EP live, I’m so excited!!!”

Beren Olivia, who released her latest single ‘Tomorrow’ this month, said:
“I’m so excited to be joining the incredible line-up for Live At Leeds: In The City. I absolutely love Leeds – it’s a city where lots of my fans are based, and is somewhere I’ve never played before, so I can’t wait to head up North this October. See you all there!”

Recently winning the BBC Radio 1 Live Lounge competition, Uninvited said:
“We’re so excited to be on the bill for Live At Leeds In The City! It will be our first time playing in Leeds and we’ve heard nothing but good things! Winning the BBC Radio 1 Live Lounge competition was huge for us so we can’t wait to put on a show for our new fans in Leeds, and we can’t wait to see Pale Waves either!!!

Flowvers said:
“It’s an honour to be going up to Live At Leeds: In The City this year. We haven’t been there since playing Cafe Totem in 2019. We’ll be sure to pull out our finest performance. See you there.”

Combining those essential new names shaking up the music world with some of the most beloved and celebrated bands of recent times – it’s a combination that has set Live At Leeds apart from the rest into a true institution of the music world. A true cult favourite, Sea Power will bring a career of over 20 years to the centre of Live At Leeds: In The City for a performance celebrating a band continuing to innovate with each step of their acclaimed career, whilst the heavy kicks and roars of Dinosaur Pile-Up return to Leeds with an emphatic set that’ll be lighting moshpits alight come Saturday 15th October.

These names serve as just a taster of what to expect from an inner-city destination that year after year has been responsible for showcasing the next future superstars in one place before anyone else. The true discovery festival for fans, the likes of Ed Sheeran, Stormzy, The 1975, Lizzo, Sam Fender, Royal Blood, Sam Smith, Tom Grennan and many more have all graced the Live At Leeds stage on their way to global tours and multi-platinum success – and this year promises to be no different. Discovering the next big thing, your next favourite artist and the soundtrack to the year ahead – Live At Leeds: In The City returns once again as the only date in the diary new music fans need.

Speaking about Live At Leeds: In The City 2022, Festival Promoter Joe Hubbard said:
“As we get ready for the inaugural edition of Live At Leeds: In The Park, we’re delighted to announce the first wave of names for the festival that started it all – Live At Leeds: In The City. It’s been formative for so many artists’ careers and we’re excited to be criss-cross across Leeds City Centre this October to discover more of our favourite new artists who are set to takeover in 2023 and beyond! Headliners Pale Waves are a great example of this, having stormed the Brudenell Social Club back in 2018 for an unforgettable set – so having them return to headline the festival as a whole is sure to be a real moment. With many more to be announced, it’s going to be an incredible day and we can’t wait to see everyone this October!”

Earlybird Tickets for Live At Leeds: In The City 2022 have already been met with unprecedented demand, with Tickets now available for just £39. Special VIP tickets (which includes Priority Entry access to venues, afterparty entry and more) are available for £55 – with both available from:
https://www.liveatleeds.com/cityhome