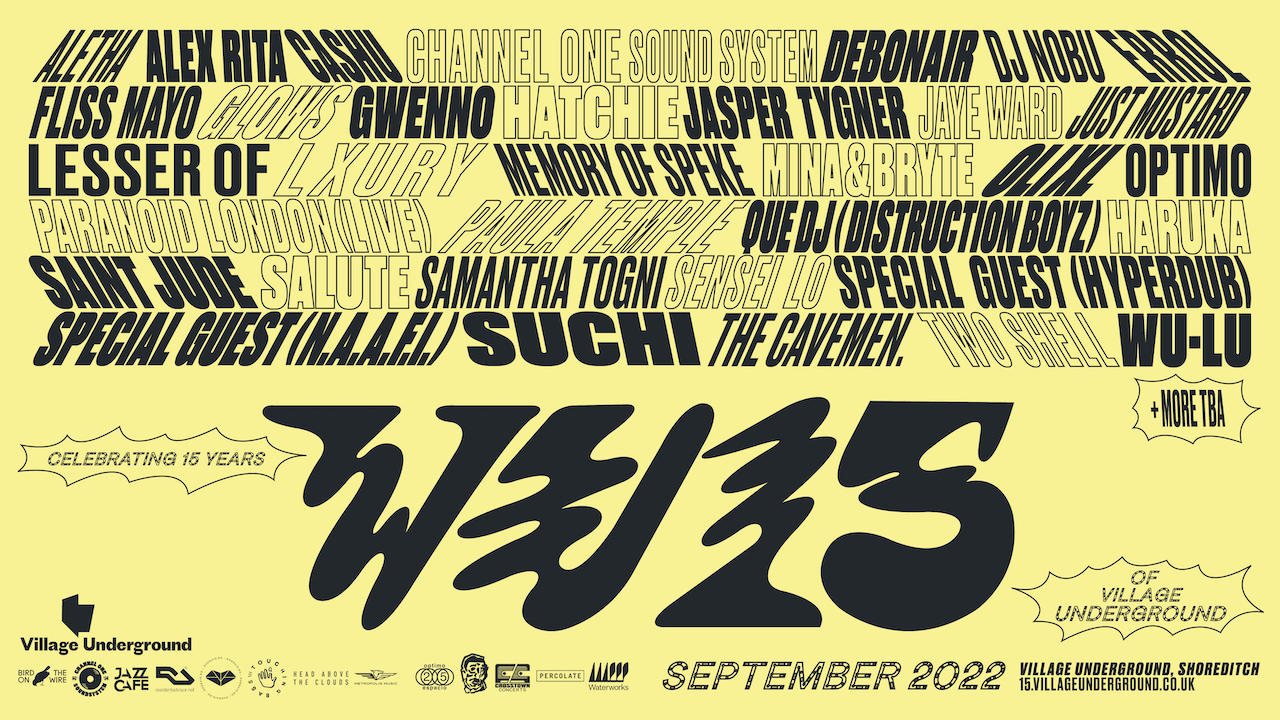 Village Underground celebrates its 15th birthday with a month of parties this September. Gwenno, salute, DJ Nobu, Paula Temple, Two Shell, Optimo, WU-LU, Oli XL and Channel One Sound System have all been announced this morning as part of their VU15 anniversary programme, with collaborations from Eat Your Own Ears, Jazz Cafe, Loud & Quiet, Slow Dance, Parallel Lines, Percolate, Krankbrother, and Touching Bass.

Throughout September the music venue will be marking fifteen years of independence, whilst looking ahead to the future, with live music, club nights and concerts embracing the genre and form-defying nights VU has become known for.

Emerging artists will take centre-stage, with a packed-out club night on Saturday 3 with Two Shell, SUCHI, Amaliah and Cashu, along with a special guest flying over from New York; South London’s WU-LU headlining on Thursday 8 September; a Jazz Cafe collaboration presenting a high-energy blend of South African house, gqom, UK funky, dancehall and afrobeats with Mina & Bryte and Que DJ of Durban duo Distruction Boyz on the line-up for Friday 9; a Touching Bass party featuring Lagos’ The Cavemen. with special guests on Saturday 10 September; and plenty more.

As part of the VU15 programme, Village Underground will be welcoming back some familiar faces to its cavernous warehouse including Paula Temple who is returning to Village Underground for the UK debut of her Noise Manifesto party; Optimo, celebrating their 25 year anniversary; VU staple Channel One Sound System; and DJ Nobu who brings his and Haruka’s FUTURE TERROR club series to the UK – the night’s first ever outing outside of Japan. Since 2007 VU has been one of the only constants in the ever-evolving Shoreditch landscape. Surviving the past 15 years has been no easy feat for VU, and September will be an opportunity to celebrate a true stalwart of London’s music scene and nightlife.

Village Underground has been cultivating London’s next generation of creatives for 15 years (way before we were even here, we’re new!), to continue doing this we need to keep the door open for new audiences, relationships and innovation. From the Gqom sounds of Que DJ (Distruction Boyz) to the multi-faceted palettes of artists like SUCHI, Aletha and DEBONAIR, and from emerging new live artists such as Lunch Money Life, Kit Sebastian, Hatchie and Wu-Lu, together with many of our favourite promoters, partners and collectives, we are celebrating our 15 years while presenting the future of the venue as we hope to see it.

For us, VU is a concept that is still in its early form, there is still so much to do and refine with our programming but we want to use our positions to promote a more diverse, equitable and fair industry through putting on the best events London has to offer. Within VU’s walls, people are inspired on a weekly basis, ideas are shared, memories are made and creativity blossoms – the creativity that allows culture to be the catalyst for change that it has always been.

The one good thing about the pandemic is that it forced us to slow down and spend some time thinking about what Village Underground had achieved by then – the good and the bad – and what needed to change. A lot of these changes are reflected in the VU15 programme – it also offers clues to what is coming next: more diverse and engaged programmes, making the most of our independent status, working with all sorts of interesting, fun, new promoters, collectives and artists and finding ways to support each other as we all slowly recover from Covid. Ultimately, we want VU to be for everyone and this won’t just be about our audiences and who is on stage, but also who we work with, how we work together and how we treat each other.

We cleared burnt out cars and years of fly-tipped waste, sandblasted walls, laid concrete over the mud and planted a meadow for our roof. There was no plan; we just saw an opportunity to do something and took it. In the early years the never ending possibilities of London’s creativity ventured through the doors and sowed the seeds of VU to come, gradually taking shape as a grassroots music venue.

The last fifteen years has been a kaleidoscope of artists from around the world, with living legends like Alicia Keys, A$AP Rocky, Blondie, Charli XCX, Jeff Mills, Lee Scratch Perry, Mulatu Astatke, Pixies, Stone Roses and Underworld – sharing the stage with new artists from the underground, emerging scenes and global cultures – and this is the true heart of Village Underground.