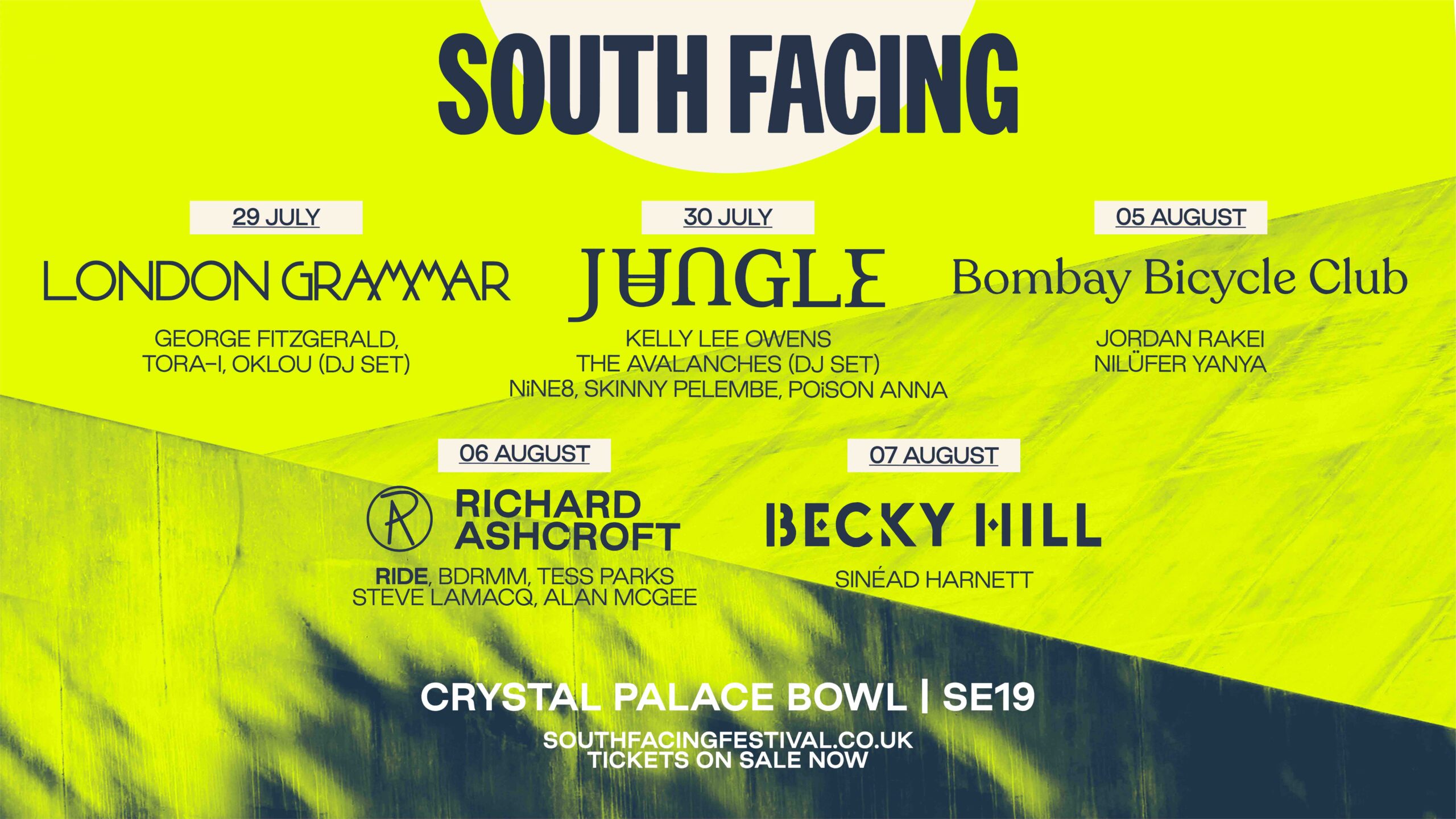 With just one month to go until the open-air concert series South Facing opens the gates of Crystal Palace, limited tickets are still available. In what is a truly stellar line-up, London Grammar, Jungle, Bombay Bicycle Club, Richard Ashcroft and Becky Hill will all be headlining the iconic venue later this month. Support acts across the six shows include Ride, Jordan Rakei, Nilüfer Yanya, George Fitzgerald, Tora-I + Oklou (DJ Set), and Sinead Harnett. Also, a programme of free activities has been announced for midweek evenings called The Sundown Sessions. South Facing tickets are available here.

Placed within the breath-taking location of a natural amphitheatre facing a lake, South Facing is a truly innovative concert space with its stage ‘floating’ on the lake amongst the lush backdrop of one of London’s best parks. This truly unique setting will help to create moments to remember for all in attendance, as fans will be able to witness some of their most loved artists in a venue space unlike anything they have experienced before.

First to be announced for South Facing 2022 was London’s own Jungle. Since their debut album was released in 2014, the funk and soul-infused electronic duo have become one of the best and most exciting names in British music. Having released their third studio album – ‘Loving In Stereo’ – in 2021 to monumental critical and commercial success, the Mercury Prize nominated band are now poised to bring their phenomenal live show to the Crystal Palace Bowl on Saturday 30th July.

Also appearing are the exceptional London Grammar, whose musical aesthetics span across indie, pop, electronic, and more, acting as the perfect companion to the astonishing Crystal Palace Bowl locale. With three studio albums to their name – including their x2 Platinum debut album ‘If You Wait’ (2013) and UK no.1 album ‘Truth Is A Beautiful Thing’ (2017) and Californian Soil (2021) – London Grammar have a catalogue overflowing with fan-favourites, such as ‘Strong’, ‘Wasting My Young Years’, ‘Baby It’s You’, ‘Let You Know’, and ‘Hey Now’. With support sets from George Fitzgerald, Tora-I + Oklou (DJ Set), and more special guests still to be announced, London Grammar’s South Facing show on Friday 29th July is not-to-be-missed!

Next to be announced was the iconic Bombay Bicycle Club. For over a decade, the North London native’s sound has never stood still as they manoeuvre between a diverse spectrum of influences, all the while maintaining their unmistakable indie/alternative music characteristics at their core. With 5 studio albums to their name – four of which entered the UK top 10 – it would be impossible to write the narrative of the British alternative music scene in the 2010s without mentioning Bombay Bicycle Club as a leading component. They’ll be playing their headline show at South Facing on Friday 5th August, with support slots from the genre-fusing multi-instrumentalist Jordan Rakei and the endlessly soulful singer-songwriter Nilüfer Yanya, as well as additional special guests still to be announced.

Continuing the exceptional line-up of names, South Facing will be welcoming British music royalty Richard Ashcroft to the Crystal Palace Bowl in 2022. Following on from his career as frontman of legendary band The Verve, Richard Ashcroft forged an immensely successful solo career, with all six of his studio albums entering the UK Top 5 album charts, including five UK Top 3 albums and one UK Number 1 album. His ability to span almost three decades of popular culture is testimony to his acclaimed artistic abilities, and the UK music landscape would undoubtedly not be the same without his imprint. Now, on Saturday 6th August, the indie icon will bring his catalogue of anthems to south London. Fans can expect to hear classics such as ‘A Song For The Lovers’ and ‘Break The Night With Colour’, as well the historic hit ‘Bittersweet Symphony’, which Ashcroft recently re-arranges for his 2021 solo album, ‘Acoustic Hymns Vol. 1’. Support comes from 90s ‘Shoegazing’ royalty, Ride along with DJ sets from BBC Radio DJ Steve Lamacq and Creation Records founder, Alan McGee. Also appearing on the bill will be BDRMM and Tess Parks.

Headed to the Crystal Palace Bowl for a rescheduled date of Sunday 7th August is dance and pop sensation Becky Hill. Having amassed a monumental 17.3 million monthly listeners on Spotify as well as 8 top 20 UK singles, the 2022 Brit nominee and winner is poised to bring her dancefloor-focused anthems to South London this summer. Expect to hear huge tracks ‘Lose Control’, ‘Gecko’, ‘Remember’, ‘Afterglow’, and many more when she takes to the stage. Joining her as support act is Sinead Harnett.

Additionally, the joint headline show between Kamasi Washington and Ezra Collective will now take place in East London’s legendary Troxy on 7 August for a ‘South Facing Presents’ show. Perhaps the most esteemed global name from across all of modern jazz, Kamasi Washington has worked alongside the likes of Kendrick Lamar, Herbie Hancock, Flying Lotus, Thundercat, Run The Jewels, and Robert Glasper, to name just a few. He has helped to dismantle the barriers between mainstream popular music and modern jazz, dissociated jazz from elitist culture, and has been integral to the 2010s jazz revival era, re-establishing jazz as focal to the popular culture zeitgeist once more. Joining him is London’s own Ezra Collective, who have been an intrinsic part of London’s 2010’s jazz renaissance, helping the city to become widely regarded as the place-to-be for modern jazz. Tickets are now available HERE.

South Facing Festival  are also excited to announce the return of the free mid-week Sundown Session series for 2022. An integral part of the 2021 Festival, these free mid-week events will return this summer to the festival, giving everyone in the local community a chance to come and enjoy this beautiful site and fantastic facilities. The Sundown Sessions will take place on 1, 2, 3 and 4 August during South Facing Festival. More information below.

Locals to Crystal Palace will be eligible to purchase a limited number of discounted tickets for each show day, with prices starting from £30.00 and capping at £35.00. To purchase these tickets, locals can follow the link HERE.

The Crystal Palace Bowl has been home to some of London’s most iconic shows over the years, including Pink Floyd, Bob Marley, Elton John, Lou Reed, The Pixies, the London Symphony Orchestra, The Cure, The Beach Boys, The Sex Pistols, and many more!
South Facing is in support of Crystal Palace Park Trust, a registered charitable organisation working to assume management of Crystal Palace Park and lead its regeneration. With a motto of: ‘Every penny we raise in the park stays in the park’. They are committed to improving Crystal Palace Park for everyone who uses it, helping make the location of South Facing one of the best spots in London all year round.