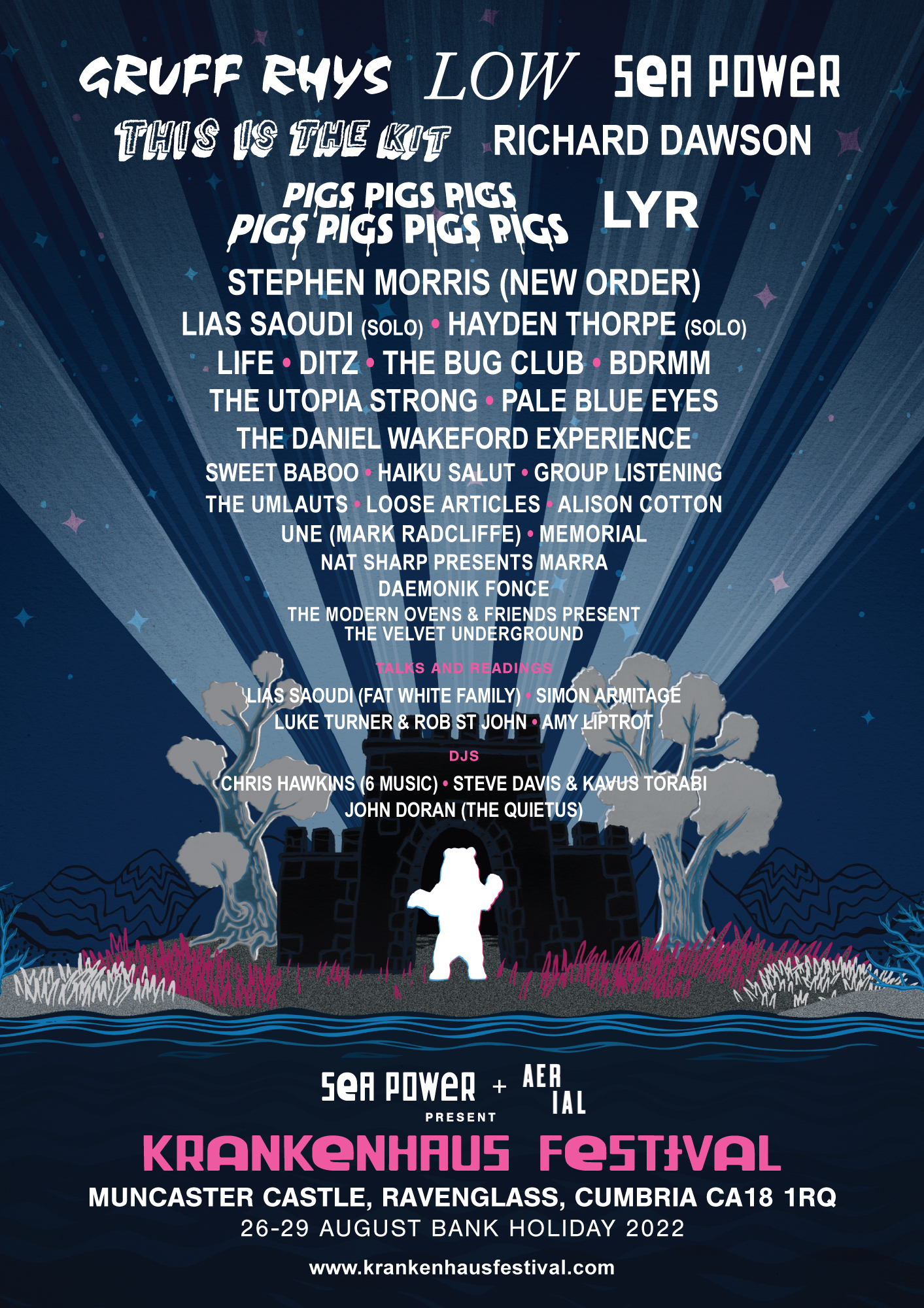 Presented by Sea Power and the Aerial Festival.

View the magnificent festival site in the video below.

Krankenhaus Festival was first staged in 2019 and was raved about by listeners of Steve Lamacq’s BBC 6 Music show, many of which noted it as the best festival of that year. For the 500 people in attendance, a legend was born. Founded and hosted by Sea Power, Krankenhaus takes place in a truly amazing location – in the grounds of a 12th-century castle, nestled between the West Cumbrian fells and the Irish Sea, close to where three members of Sea Power grew up. John Ruskin described the area as the “The gateway to paradise.”

This cultural cornucopia will be unveiled alongside Muncaster Castle’s splendid grounds and gardens, where there will be thrilling flying displays from the castle’s extensive collection of birds of prey and owls. Entrance to the castle and gardens, along with the raptor displays, are all included in the festival ticket price. In this remarkable setting, festival-goers can instantly move between live music and serene woodland – on the one hand brilliant bands, on the other a medieval castle, a church and views to the high hills. This is where rock music meets the highest rocks in England, with the peak of Scafell Pike forming the backdrop to the festival. The steam trains of the Ravenglass & Eskdale Railway are adjacent, ready to take festival-goers on a journey into the fells – at a 50% discount to all attendees.

“The first Krankenhaus was an unforgettable weekend,” says Sea Power co-frontperson Jan. “It felt amazing to bring brilliant music and wonderful authors to such a magical part of the world. Covid stopped us making an immediate return but now it feels great to be going back – with a bigger bill and a bigger audience. Some of our band grew up in the Lakes and it really does feel like an honour to be putting this event on in this place.”

Sam Hunt from Aerial says, “It sometimes feels like the Western Lake District coast gets overlooked or forgotten about, but it’s a magnificent place to host a festival. This area is home to some incredible artists and creatives and over the coming years we’ll be working with both them and Sea Power to create something as unique as this landscape. Krankenhaus brings a wonderful opportunity to develop new talent and new audiences in Cumbria.”

Aerial is a collective of artists, producers and creatives from Cumbria who work across art forms and with artists both local and international.

At Krankenhaus Festival, camping is available, included in the ticket price. There are also options for yurts, pods and camper-van parking, while the Ravenglass area has many options for hotel, B&B and self-catering accommodation. There will be shuttle bus services running along with local taxis to ease access from outlying locations.

Pets are welcome at the festival.

There are a limited number of discounted tickets for people on low incomes and people with disabilities, with one free ticket for carers.