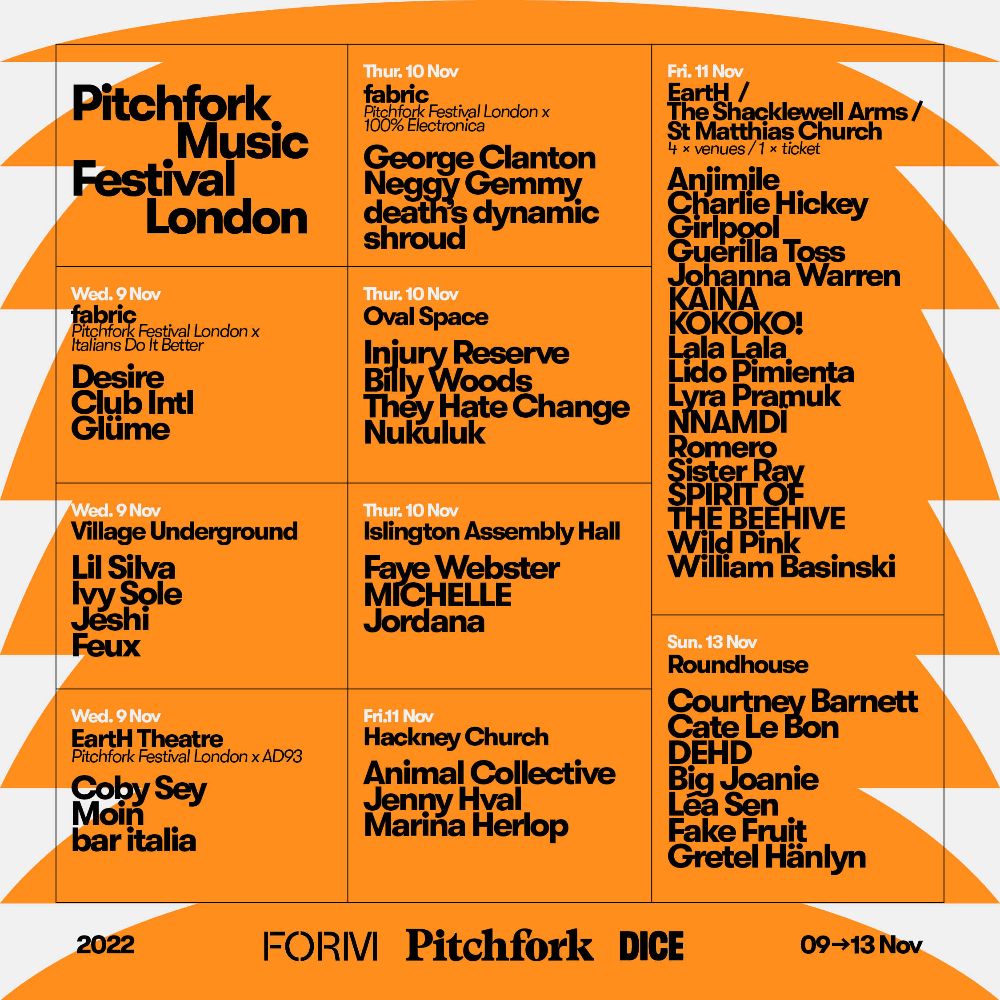 Pitchfork is delighted to announce the return of Pitchfork Music Festival London, taking place from 9 – 13 November 2022. Following the success of the inaugural edition last Autumn with 10,000+ attendees and performances from the likes of Stereolab, Tirzah, Black Midi, PC Music, Moses Boyd, Anna Meredith, Mykki Blanco and more, this year’s event series again features very special performances from a diverse and wide scope of over 50 exciting new and established artists, across an array of genres in various iconic spaces in the capital over five days.

Pitchfork Music Festival London opens with unique, Pitchfork curated weekday bills, special collaborations and label take-overs from AD93, Italians Do It Better and a 100 % Electronica New York Vaporwave event, coming to Europe for the first time, all at various iconic London venues such as Fabric, Oval Space, Village Underground, EartH and more. Like last year the week then builds to festival weekend events including a multi-room set-up at The Roundhouse, and a multi-space / one ticket take-over of Dalston/Hackney venues including EartH Hall, EartH Theatre, Hackney Church and surrounding spaces. More weekday special events, additional artists, a weekend club event and after-parties are to be announced in the coming weeks.

Courtney Barnett‘s headline appearance at The Roundhouse on the Sunday will be her first in the capital since the release of last year’s critically acclaimed Things Take Time, Take Time as well as her first London indoor performance since headlining O2 Brixton Academy in 2018. Animal Collective will be performing live in the UK for the first time since the release of their acclaimed new record Time Skiffs, and their Friday night headline at Hackney Church marks their first London show in four years.

Pitchfork readers–and die-hard music fans–have been travelling across the world to experience the brand’s annual festivals in Chicago and Paris since 2006. After the successful launch of the festival’s London edition in 2021, the brand remains bullish on the continued expansion of its international festival footprint.

“We’re thrilled to be today announcing our first incredible artists for the second Pitchfork Festival London – and to be part of a growing family of events now in Paris and Berlin in the same period. We were blown away by the reception to the launch of Pitchfork Festival in the UK last year, and we can’t wait to develop the event into its second year. With so much exciting music across the bill, it’s going to be a really amazing five days – plus we still have very incredible stuff to announce ahead of November too!”

“Following the celebratory return of Pitchfork Music Festival in Chicago last year, along with the sold out debut of Pitchfork London and the success of Pitchfork Paris, it feels exhilarating to launch our first-ever festival in Berlin–a city that has long served as a global focal point of culture and creativity. It’s heartwarming to see Pitchfork resonate with music fans around the world and grow our community in new cities.”

Tickets for each Pitchfork Music Festival London event will be sold separately. Pre-sale tickets will be available on Thursday 30th June at 2pm BST from Pitchfork Festival’s mailing list, with general on-sale to follow on Friday 1st July at 10am BST. Tickets are in partnership with the festival partner DICE and will be available from http://pitchforkmusicfestival.co.uk/.

For the latest news including lineup announcements, and additional programming, follow @pitchforkparis, @pitchforklondon, @pitchforkberlin, and