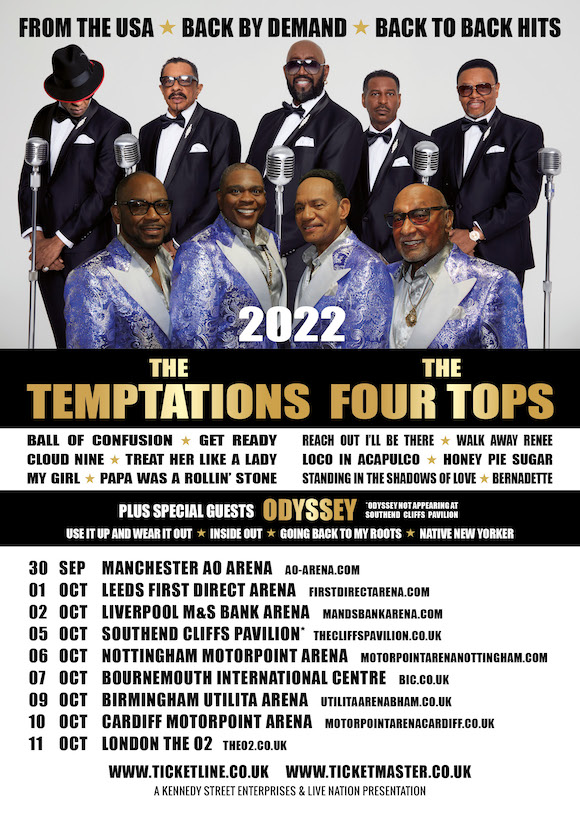 he Four Tops and The Temptations with special Guests Odyssey bring their re-scheduled UK tour to our shores in September/October 2022.   They have added an additional show at Southend Cliffs Pavillion on Wednesday 5th October.  Tickets remain valid for the new dates.

The Temptations and The Four Tops will be performing some of their most popular and award-winning songs that continue to inspire musicians around the globe. The Tamla Motown label broke down cultural and social barriers and The Four Tops and The Temptations were at the very forefront of that transformative period.  Original members, Duke Fakir and Otis Williams, of the Four Tops and Temptations respectively, hold a special place in the hearts of British fans, and they are both delighted to be returning to the UK for the 9-date concert tour in September/October 2022.

We are thrilled to be coming back to the UK, says Duke Fakir. We always have such a great reception from our fans here, it always feels like home. It makes it so special to perform for the folks in Britain.

Otis Williams, founding member of The Temptations, adds, We want to thank our fans in the UK for supporting and inspiring us over a half century. We look forward to celebrating our 60th Anniversary and sharing news about our new album, Temptations 60 with all of you. Weve had such memorable trips to the UK, dating back to the 60s, and we cant wait to see everyone this fall.

I Cant Help Myself (Sugar Pie Honey Bunch), Reach Out Ill Be There, Standing In The Shadows Of Love, Bernadette, and Walk Away Renee are all timeless Four Tops classics that need little, or no, introduction and they enjoyed a revival of fortunes when Loco In Acapulco, from the film Buster, was a UK hit in 1988.  Four Tops founder member Duke Fakir is joined by Ronnie McNeir, Lawrence Payton Jr and Joseph Alex Morris a truly fine vocalist with a commanding delivery in the current line-up.

The Temptations are marking their 60th Anniversary with an international tour this fall, and they just released a much-anticipated new album, Temptations 60. The new album consistsof nearly all original songs that are both modern and classic in feel and sound, and it brings the group together again with some of its beloved producers, including Smokey Robinson and Narada Michael Walden. The Temptations rank No.1 in Billboard magazines most recent list of Greatest R&B/Hip-Hop Artists of All Time and are included in the magazines 125 Greatest of All Time Artists. The groups blockbuster No.1 hits Just My Imagination, Papa Was a Rollin Stone, and My Girl are among the Rock and Roll Hall of Fames 500 Songs That Shaped Rock and Roll.

Following their initial 1977 UK success with Native New Yorker, Odyssey returned to the UK charts with Use It Up And Wear It Out which spent two weeks at Number 1 in 1980. If Youre Looking For A Way Out, Going Back To My Roots and Inside Out were all Top 10 smashes on this side of the Atlantic. Steven Collazo joined his mother Lillian Lopez in the band, and they continued performing across the UK, Europe, and the Middle East. Steven continues to lead Odyssey keeping the memory of his late mother very much alive.  He says We are so honoured and pleased to be joining the legendary Four Tops and Temptations in the UK as their special guest and support. These islands have always been, and continue to be, so very welcoming to us and appreciative of our music, even after 40 years. I cant begin to convey how excited we are to be appearing with such great entertainers in front of such great people.

Tickets are valid for the new dates.  Tickets available from: www.ticketline.co.uk 24-hour ticket line 0844 888 9991, or from the venues direct.