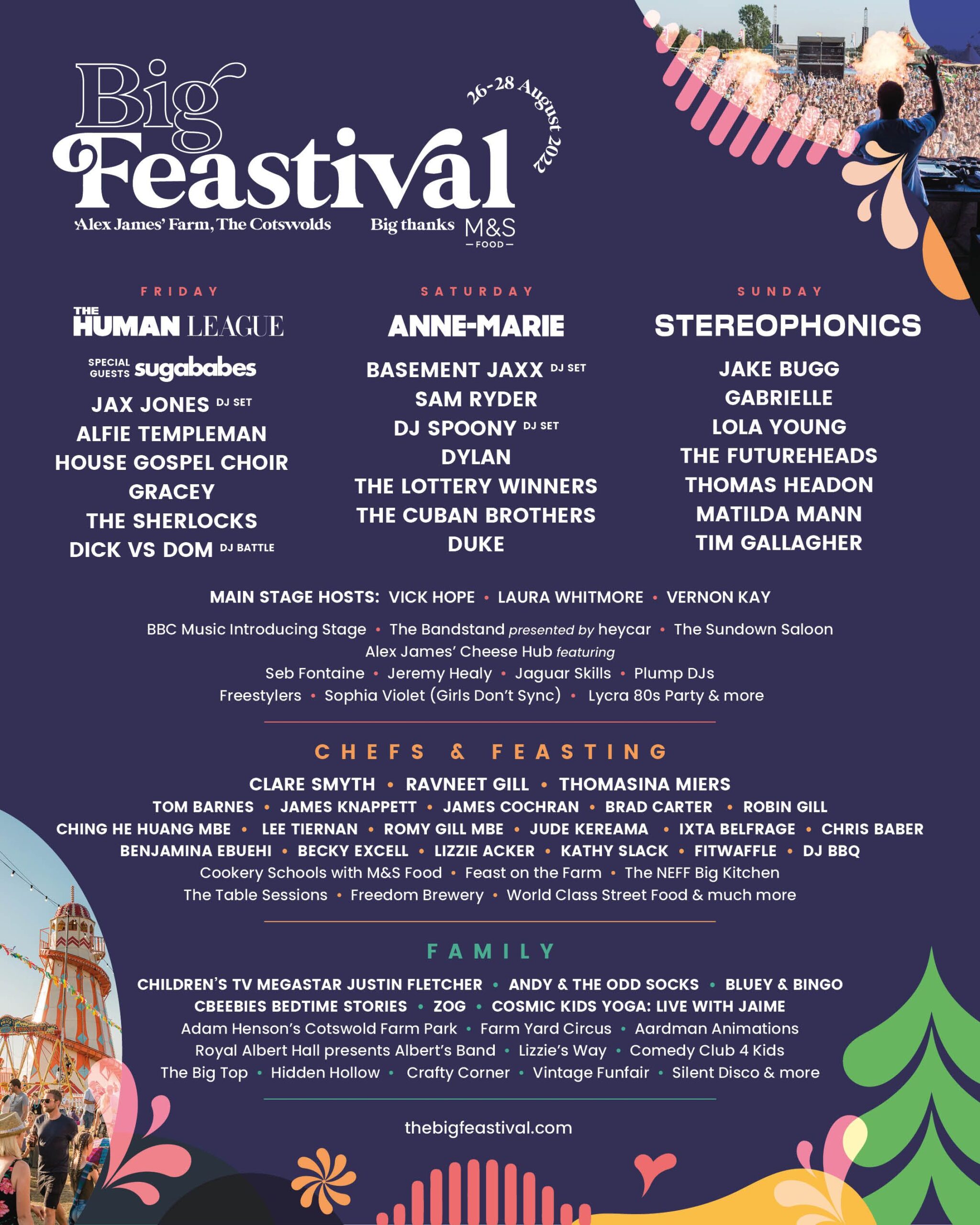 Big Feastival, proudly presented by M&S Food, today announces brand-new additions to its unmissable line-up with the return of the BBC Music Introducing Stage and introduction of new areas including a brand-new music stage, as the festival returns to the Cotswolds this summer from 26-28 August 2022. Hosted at Alex James’ Farm, the August Bank Holiday festival is once again bringing the very best of live music, critically acclaimed chefs, award-winning street food and an unrivalled programme of family entertainment. Day tickets start from £85.00 and children under 12 go free, with very limited availability for Weekend and Camping tickets with over 85% sold! Tickets are available at www.thebigfeastival.com

Big Feastival is thrilled to welcome a plethora of rising stars that will be playing the returning BBC Music Introducing Stage across the weekend. The stage will showcase the very best in new music from across the country, after a hugely successful debut year at the festival in 2021. Brixton-born 21-year-old Jazmine Flowers will headline Friday’s programming with her soaring and sweeping voice, after the unapologetically honest alt-pop singer-songwriter Chilka kicks off the night. Saturday will see George Moir go back to his farmyard roots by performing on the Feastival site with his endlessly infectious, feelgood tunes whilst Banbury local singer and rapper, BUSHROD will bring his alternative hip-hop and indie pop fusion. Closing the stage on Sunday will be Coventry’s pop/RnB singer Reece Bahia and Oxfordshire’s Jen Berkova, offering her imaginative adventure through chill R&B and synths. Many more artists have also been confirmed, highlighting the most exciting new music in the country.

Taking the Main Stage as hosts for 2022 will be BBC Radio 1’s favourite Radio and Television presenter Vick Hope who will be hyping up the audience for a fantastic weekend of entertainment on Friday. One of the country’s most popular presenters, “Love Island” host and “Celebrity Juice” staple Laura Whitmore will introduce the day’s entertainment on Saturday, while Radio and TV favourite Vernon Kay will keep crowds entertained across Sunday.

Brand new for 2022, The Smokery is set to offer the ultimate country and western fix for festival goers. The area will be home to the new Sundown Saloon stage, which will play host to a mix of brilliant live performances from some of Britain’s finest Americana and Blues artists. The weekend’s line-up will include the likes of Joe Strouzer and his rousing harmonica driven blues, the exciting and unique jazz artist Lana-May and her Trio and Europe’s leading Dolly Parton Experience featuring Kenny Rogers. Izzie Derry will bring her Alanis Morissette-inspired songs to the stage, Maddi and Marc are set to showcase their electric folk-pop, while Morganway will deliver breathtaking six-part harmonies. The Sundown Saloon will host these and more artists for a weekend filled with cowboy boot-tapping and hat-tipping fun for the whole family.

The legendary Cheese Hub, which has seen stellar DJ sets over the years, welcomes Dick & Dom back to the decks, along with festival favourite DJ BBQ, Jeremy Healy, Plump DJs and Jaguar Skills. Seb Fontaine will bring his Ibiza club classics whilst Sophia Violet, from the all-female DJ collective Girls Don’t Sync, makes her Feastival debut. The likes of Lycra 80s Party and Freestylers are sure to entice the whole family to the dancefloor, whilst our host for the weekend, Alex James, brings some of his pop and dance classics to the Cheese Hub with special secret guests across the weekend. Anyone for a cornetto? The Bandstand will also see lots of classic Feastival fun, including drag queen appearances, a 90s Pop vs Rave party and swing dancing sessions.

The Smokery will also host the iconic Feast On The Farm, where foodies can treat themselves to a fine rustic dining experience with a not-to-be-missed menu. Guests can expect a culinary fare cooked over fire with dishes such as smoked cauliflower with seaweed romesco dressing, Porthilly Oysters and flame seared sirloin of beef. Street food options within The Smokery continue the Country and Western theme with hearty BBQ offerings such as BBQ DEPT., Gnarbecue (Ve) Jack Mays Smoke and Live Fire, as well as Libertine Burger.

Other new additions across this year’s family-friendly festival include the Hidden Hollow, where kids and adults alike can get involved with bushcraft and den building, and an all new Crafty Corner within the Village Green will house a variety of crafting activities such as tie-dye classes, DIY festival fashion and the return of Aardman Animations, the makers of the iconic Wallace and Gromit, Shaun The Sheep and many more.  For the full music, food and family lineup, visit www.thebigfeastival.com

Camping tickets are soon to sell out with over 85% now sold as Big Feastival promises to be the most fun-filled weekend of the summer! For full information on the programme and to purchase tickets, visit: www.thebigfeastival.com