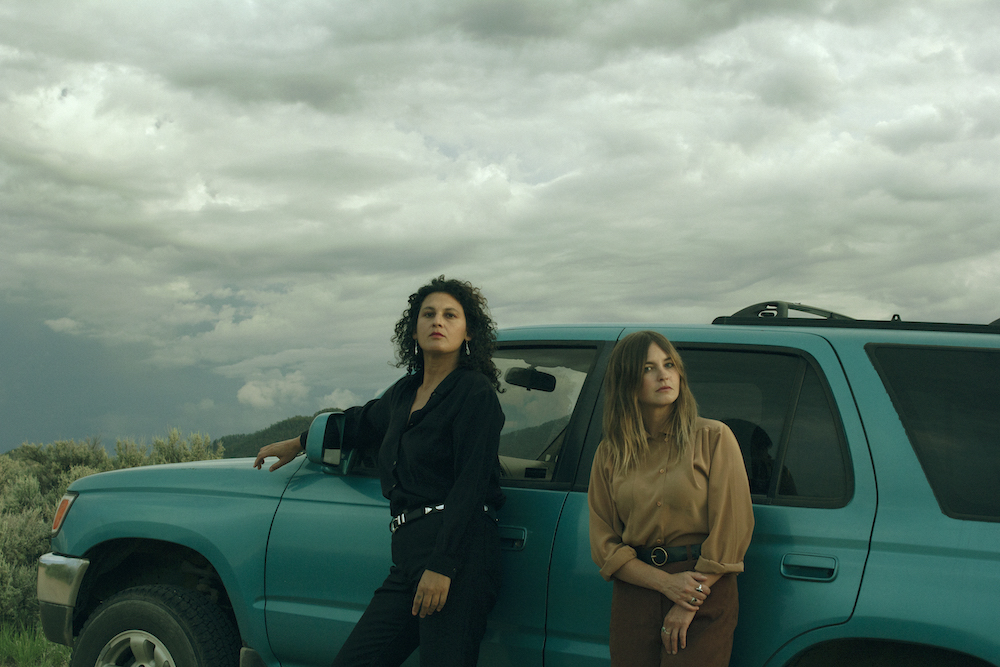 Today TAN COLOGNE have shared a third track from their forthcoming new album ‘Earth Visions Of Water Spaces’, set for release on September 9th on Labrador Records. They have also announced further European live dates for the Autumn, including shows in London, Liverpool and Sheffield – details below.

Continuing the sonic explorations of the Earth’s elements that inspired the ethereal, gravity-defying psychedelia on the New Mexico duo’s second album, the band describe latest single “Blue Swim“ saying: “Blue Swim is about walking down a path on the way to the last refuge on Earth and leaving the familiarity of landscapes and landmarks that have already become memories. A sudden realization of truly “seeing” something in its whole existence seems simple yet overlooked by traversing in normality. “Blue Swim” is our lowrider lullaby to the end of the world that we don’t want to imagine, but see a faint glimpse of in our altered Earth.”

Listening to the ethereal, spangled, psychedelic grandeur at the heart of ‘Earth Visions Of Water Spaces’, it feels appropriate that Tan Cologne reside and record amid the sparse, almost lunar landscapes of Ranchos de Taos, New Mexico. Their weightless songs appear to defy gravity, with the voices of Lauren Green and Marissa Macias floating in an empty sky while guitars shimmer on a distant horizon. That said, these same songs feel fluid, almost aqueous, their evolution unhurried as they ripple gracefully towards the skyline. It’s no surprise, therefore, to discover the album’s central theme, one highlighted by its name and more than a few of its song titles, because it’s inspired by something precious to all who live in such environments.

“We would like listeners to feel they are submerged within or near the presence of water,” the duo says. “The entire album is about water: droplets of water, atmospheric exchanges of water, and the transformation of Earth by and through water. We were drawn to this through finding shells within the desert landscape. We also read a story in the newspaper about a 300-million-year-old shark fossil found in the mountains in New Mexico thirty miles southwest of Albuquerque. There’s a lot to consider in reflecting on where the Earth’s path has been, and where and what it may be, water of course being the vital experience for existence.”

Green and Macias began recording their second album, the follow-up to 2020’s ‘Cave Vaults On The Moon In New Mexico’, in the summer of 2021 at their home, a relatively remote location. Swimming became an important daily ritual, as did gardening and visiting a nearby dry river bed, where they wrote recent single “Topaz Wave“, in whose video it can be seen. “The sides of the arroyo walls are shaped like curved waves,” they say, “reflecting the experience of tidal and earth transformation, and how the desert land was once ocean.”

The rest of each day was spent writing and recording. Tan Cologne are an entirely self-contained unit, responsible for every sound on the record, sharing vocal, guitar, lap steel, synths and percussion duties, with Green adding drums, bass, autoharp, and melodica and Macias keyboards as well as bouzouki, not to mention the artwork’s photography. At all times, however, their proximity to nature and the ferocity of its elements made its own crucial contribution to the record’s development. “The summers in New Mexico have major monsoons and lightning storms,” they explain. “Most of the recording was done during moody and wild weather in days full of contrast, from lightning storms to dust devils to snow. The album was created to tell stories of water on Earth, with all of its songs being reflections of past, present, and future civilisations.”

“The present and future being of Earth’s water and lands are an ever-present concern and prayer cycle for us,” they conclude. “The fires in the western United States are becoming omnipresent, and everything feels different and, at times, bleak. We hope humanity can shift to care for and heal our Mother Earth together.” ‘Earth Visions of Water Spaces’ is consequently the work of a band who’ve seen first-hand the crisis unfolding around us, and it’s a vivid, ingenious and aptly atmospheric reminder of what’s at stake. There’s really no excuse not to dive in.

‘Earth Visions Of Water Spaces’ will be released on September 9th via Labrador Records.