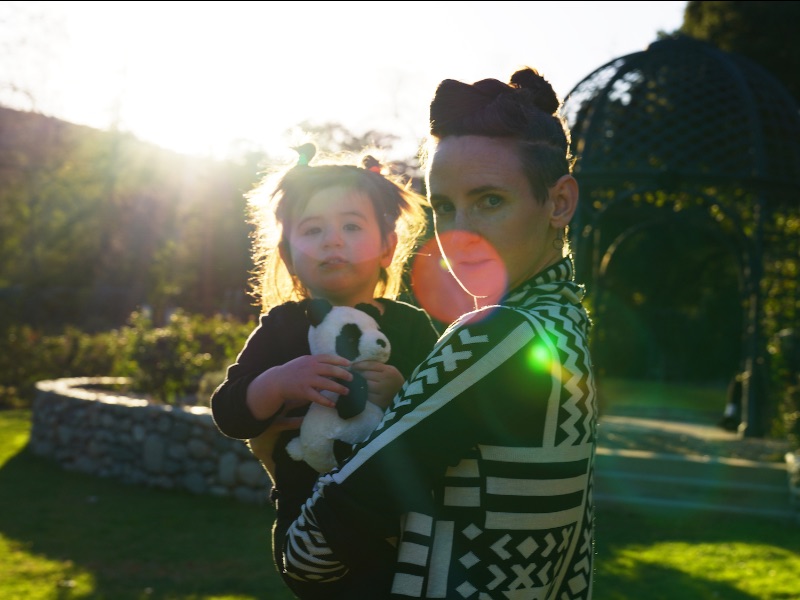 Today experimental musician and producer Katie Gately returns with a fresh collage of captured sounds, announcing details of her new album ‘Fawn / Brute’ for March 31st release on Houndstooth. Along with the announcement she has shared the album’s two title tracks, a double single of the album’s title tracks, “Fawn” and “Brute“.

Following her highly acclaimed 2020 album ‘Loom’, in which Gately channelled the loss of her mother through sounds captured from earthquakes, elephant trumpets, cantaloupe stabs and more, she returns with a new clutch of gathered sounds to continue the intimate look at her maternal line. ‘Fawn / Brute’ is 11 songs of innocence and experience exploring the light and dark of childhood energy following the birth of her first daughter. It’s an album of two halves, moving from the effervescence of early years to the defiance and turbulence of teenage angst.

The album is dedicated to Gately’s young daughter Quinn, born in 2021 and single “Fawn“, taken from the first half of the album, is a love letter to her. Meanwhile accompanying single “Brute“ embodies the darker second half of the record, its massive basslines constructed from the manipulated rattling of cardboard shoeboxes.

Gately comments: “‘Fawn‘ is an attempt to capture the delirium and mania of new parenthood. The song’s instrumental is meant to capture the buoyancy and enthusiasm of youth while lyrically acknowledging the doubt and uncertainty of one’s new role as “parent”.“Brute” is a love song for old vices, a reminder that parenthood doesn’t automatically mature us into respectable people. The song is a tug of war between responsibility and nonchalance; a struggle that is only intensified by the relentless demands of parenting.

Together, the songs symbolize the dichotomy of parenthood. You’re a new person, guided by a fierce protective love, but you’re also still the same old bastard. You’re cranky when you don’t sleep and you lie to yourself about how many ounces are really in one glass of wine. You do the best you can and you pray things will turn out well enough… but really, you’re just winging it.”

Events in recent years gave Katie Gately the space to acknowledge what she had been putting off: “For me, that was having a baby,” she says. “I turned to my husband and said ‘I think we should have a kid’. When I got pregnant I started to get creative again. I had a lot of energy at first, but later on, my pregnancy was stressful and worrying, so the music got darker and darker: I was making angry music while I was supposed to be feeling maternal.”

Gately’s daughter Quinn is referenced in the artwork’s harlequin, with two readings of the harlequin’s mischief captured in the two sides of the record, being both cheeky and transgressive with disruptive intent. “I wanted the album to feel like something my daughter could enjoy as she grew up,” she explains, “so the first tracks are childlike and upbeat, but as we get older we start to experience a volcano of emotion, angst, and conflict.” The first half channels inspirations from the busy and unsubtle dynamics of kids TV music and stomp and clatter of early Animal Collective albums. For the second half she was thinking about the brutalist sonic experiments of the British post-punk she obsessed over as a teenager, from PiL and Gang Of Four to This Heat.

In typical maverick style, Gately plundered cartoon sound libraries magpie-like to build signature nests of sounds, integrating her own idiosyncratic sound recording strategies and sampling techniques, from shoeboxes to theremin and with a boisterous recurring saxophone.

‘Fawn / Brute’ is her second album for Houndstooth, following critically acclaimed 2020’s ‘Loom’, made in the wake of her mother’s death. But where that album explored grief and long goodbyes, this album is one of play, embracing unstable mood shifts from joy to fury, embracing the energies of childhood and intensity of new life. Previous to ‘Loom’ and ‘Color’, Katie also released 12″s and a cassette on a number of notable underground labels – Public Information and Blue Tapes, as well as the critically acclaimed FatCat Split Series. Katie is also a producer, who worked on Serpentwithfeet‘s Soil (2018), and she has produced and remixed for both Björk and Zola Jesus, with Björk saying in an interview that she was struck by how Gately’s productions seemed to be “from a microphone point of view”. She was also part of Mary Anne Hobbs’ curated ‘Queens of the Underground’ Festival in Manchester (2019) alongside Houndstooth musician Aisha Devi and is currently living in Pasadena and teaching at Calarts and USC’s School of Cinematic Arts.