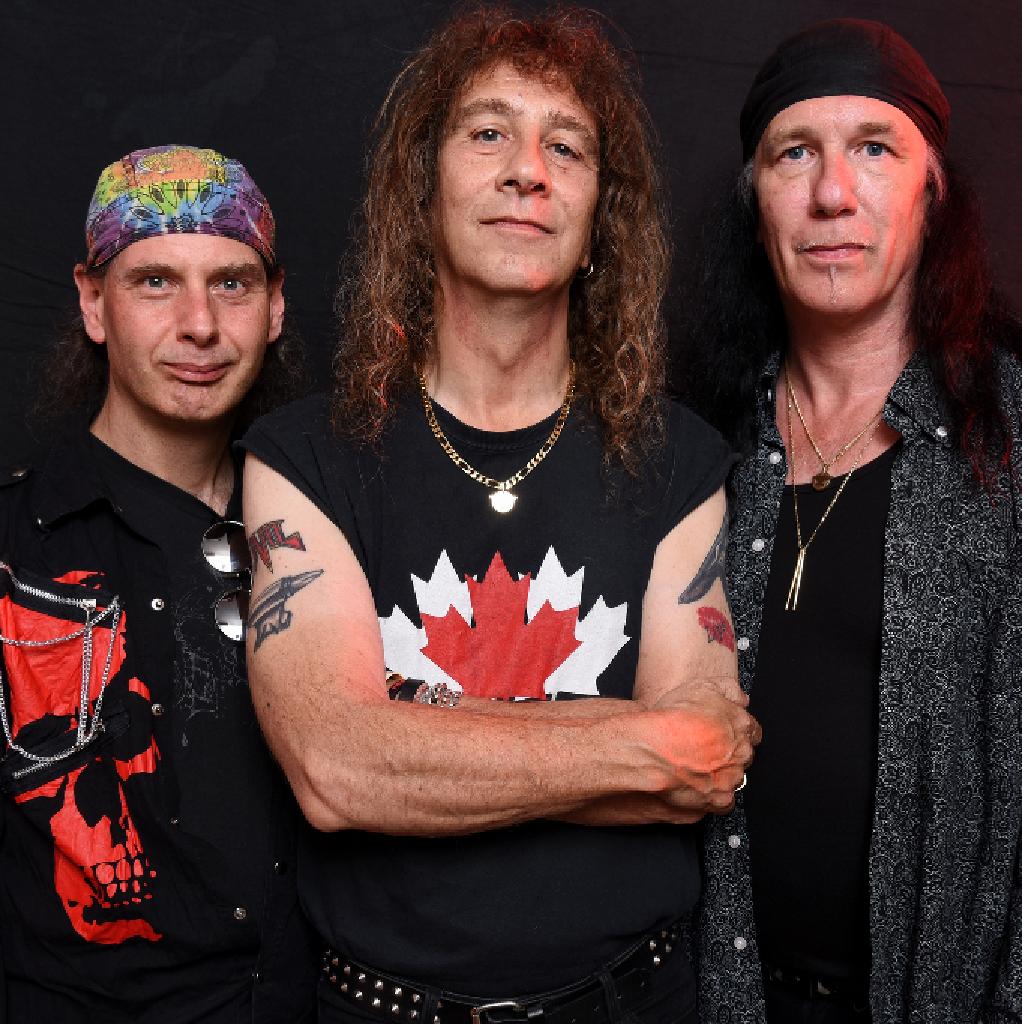 With support from Ragdoll Sunday and Electus

Of course there are bands that have garnered higher chart positions, sold more albums and filled bigger venues than Anvil. Yet there are few metal acts that have earned as much respect from their colleagues as the Canadian act surrounding vocalist/guitarist Steve ´Lips` Kudlow and drummer Robb Reiner. The most renowned Anvil aficionados include, among others, international stars such as Metallica and the late Lemmy of Motörhead, who have expressed their unreserved admiration time and again. The reasons for this evident respect are obvious: since 1978, Anvil have been the epitome of a passionate heavy metal band that refuses to be thrown off course by setbacks, adverse conditions and inconsistencies on the business side of things. Their latest album Pounding The Pavement, scheduled for release on Steamhammer/SPV in early 2018, proves their impressive stamina: never before have Anvil sounded as diverse, determined and inspiring.

Why hasPounding The Pavementturned into such an awesome offering? Kudlow’s explanation is simple: “The songwriting process started immediately after the work on our previous album, Anvil Is Anvil, had been completed,” he says. “So our thoughts instantly turned to the future again. After Anvil Is Anvil had been cut, everybody knew what we had just delivered and what Anvil’s future should sound like.” Despite the diverse range of their ideas, Kudlow, Reiner and their bassist Chris Robertson have succeeded in filling the typical trademarks of this unusual band with life once again – which is an important aspect for every Anvil release, after all tradition and reliability play an essential role in this group. Kudlow: “Of course we always allow inspirations from earlier recordings to seep in, but always with an emphasis on evolvingthe characteristic Anvil sound. Lots of fans keep asking us to play the way we did in the so-called good old days. That’s why I try from time to time to pick up on that exciting feel of our older material. Mind you, it’s always exclusively about the basic atmosphere of that time, never about copying an older song.”

This is an important angle that manifests on Pounding The Pavementin typical Anvil steam hammers such as ´Smash Your Face`, ´Rock That Shit` and ´Ego`, which have Kudlow spread his razor-sharp guitar riffs over the dynamic rhythm foundation courtesy of Reiner and Robertson, adding additional bite with his familiar raw vocal style. But there are also unusual numbers such as ´Warming Up`, which sees Anvil transport a kind of swing jazz style into the world of rock and metal. The most surprising track, however, is ´Nanook Of The North` with a lyric about the fate of the Inuit: “As a Canadian band, we wanted to focus on more Canadian topics,” Kudlow explains. “I remembered a course at the College of Movie History, where I saw one of the first TV documentaries ever. I did some research on the internet and came across that strange overtone singing the Inuit do. I was totally awed and knew immediately what I had to do: write a song with that typical tribal feel. That college documentary was made some time during the 1920s and is called ´Nanook Of The North`, named after the protagonist of the documentary. So I had found my title and the subject of the song.”

Pounding The Pavementwas produced at the Soundlodge studios in Rhauderfehn in the northwest of Germany, where Anvil found not only the necessary peace and seclusion to concentrate on their recordings, but also met in studio owner Jörg Uken the ideal producer for their ambitioned work. Talking of which: the programmatic album title Pounding The Pavementis a synonym for the consistently serious challenge of ensuring Anvil’s financial survival. Kudlow: “I feel nothing could describe the way we’ve been working for the past forty years better than Pounding The Pavement: Anvil have tried for four decades to earn enough money to survive and continue to make music.”

In view of their impressive new album which brims over with inspiration, Anvil can look into the future with optimism, knowing that they have succeeded – as expressed in their song ´Doing What I Want` – in not having to pander to anyone’s taste artistically: “Despite all adversities that the life of a musician entails, we still find ourselves in a very privileged position. We can basically do what we want to do. Nobody interferes, nobody tries to steer us in one direction or the other. Which other artists can say that of themselves? Even the biggest bands in the world envy us and tell us: ‘You damn bastards have always been able to do what you want.’ And that’s precisely what we’ve done again on Pounding The Pavement.”