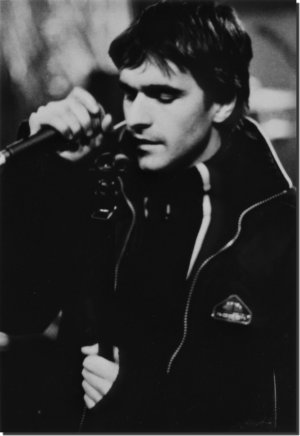 Ex Bluetones frontman Mark Morris treated fans to exclusive tracks at the intimate acoustic set at Manchester’s Dry Bar with support from a handful of up and coming talent.

Manchester foursome State Dancer were the first to warm the crowd, standing out from the hordes of teen indie rock bands dominating the market today. A relaxed and varied stage presence that was reflected in their music from ska influence in ‘The Stag Weekend’ to Latino beat in ‘When the Carnival Marches in’.

The most notable appearance was from newcomers Bluebird Kid Clark, fresh from winning the title of best up and coming band with T4. The confident and brash stage presence demanded instant attention, rolling into drum thumping numbers reminiscent of 60’s rock. Amongst the tracks from the newly released album ‘Bottom Dollar Discount’ were ‘2 barrelled shot gun’ and ‘Ray of sunshine’ that urge you to sing along with accompanied la’s and bah bah’s. Although playful the song writing ability is strong and together with the bands distinct sound there’s no doubt they are tipped for success.

The Ambersons took charge to ease the crowd after the Bluebirds lively ho down, lowering the tempo with a mix of synth pop and guitar rock. A style comparable to The Flaming Lips and Primal Scream with a tambourine finish, a perfect warm up before Mr Morris was due on stage in the headline slot.

After building up a reputation for his solo sets since 2004 there is a clear change in Mark Morris’ style from the 90’s Britpop hay day of the Bluetones. A relaxed and intimate gig, the set list was ad hoc and mainly cover based with requests from the audience including tracks from Bob Dylan, Teenage Fanclub, The Pixies and Amy Winehouse. Highlights included a tribute to George Best with Teenage Fanclub cover ‘Alcoholiday’, ‘The melancholic ‘Fountain Head’ and the first live performance of ‘Lay down’. With much enthusiasm from the crowd Morris finished with ‘Teenage Jesus’ and the promise of a return to Manchester with the Bluetones.