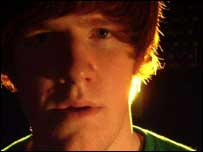 A split EP from two artists signed to Get Cape Wear Cape Fly’s record label – this is a cause for celebration.

Isaac and Leighfield sing one of their own songs each and then cover one of the others and the record is a mini delight. Isaac’s ‘Sticker, Star and Tape’ is an inevitable highlight due to it being the title track on his great album from earlier this year, but perhaps the best moments on this four-track release are the two covers.

Leighfield’s version of ‘Annie Hall’ is arguably better than the original, for while he shares Isaac’s gruff-yet-heartfelt vocals he adds far more percussion and gives the song a fuller, more finished feel. Isaac’s version of ‘I Miss Those Summers’ is fantastic, and is up there with ‘Sideways’ as the best thing he’s ever done. Leighfield also has the same way with words as Isaac and creates wonderfully cute lyrics that somehow never seem schmaltzy (“my mum used to say ‘make sure you’re back by 5, don’t stay out late, don’t rip a hole in your jeans’”).

Leighfield’s own ‘The Rain Will Come’ completes the record and is like a very English version of Bruce Springstein’s ‘Secret Garden’. This is a lovely little collaboration of two young talents in the Frank Turner mould and if there’s any luck they’ll soon be widely heard.