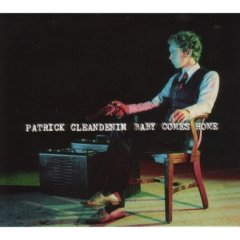 Never judge a book or in this case a CD, by its cover. A fact we should all remember before we tuck into new records. For example anything with a scantily clad lady on the front cover should, by the nature of our indoctrinating highly sexualised marketing culture, be wonderful. Not so! What about blokes with guns on the front cover, they’re always good fun in films and computer games? Again, not true for records! Normally albums that employ any of those techniques are either by hair metal bands or bling obsessed rappers used as a honey trap to lure people towards their dull, vacuous music.

The front of Baby Comes Home makes young Patrick Cleandenim look a little like a sexed-up Napoleon Dynamite, decked out in a pinstripe suit looking moody with a suitcase undoubtedly full of cash and oh dear, a gun. It’s arty, scary and just a little cheap looking. What on earth could this sound like? I plump for the sound of Jamie Cullum doing gangsta-rap. I get it half right.

His debut album, Patrick Cleandenim is a young New Yorker who despite the tender age of 22 has been already played on the same bills as indie luminaries like The Shins and The Decemberists. With such credentials glasswerk expected a similar brand of alt-rock quirkiness and we certainly got the quirkiness. But something just doesn’t gel with Baby Comes Home. Despite his qualifications in cool this album still treads a very thin tightrope between a work of cute genius and the kind of boogie-woogie, Dad music that would get Jools Holland all hot and bothered in the run up to his Hootenanny.

Manning a piano and backed by a full brass band on most tracks Patrick is clearly a talent. While musically this a very light, bouncy album his lyrics are deceptively dark, murky tales of everything from drug fiend superstars to randy vampires. There is a real film-noir feel to the album, like you should be hearing him perform in a smoke filled speakeasy, in an old Humphrey Bogart movie. There are moments that are truly joyous, Cognac and Caviar and Birds of Fashion are fantastically upbeat numbers, simple on the surface and with enough kick to get you up and out of your chair. On Whispers Only Hurt Them Cleandenim ups the sexiness and leaps into Jim Morrison’s voice box for what is perhaps the one track that strays towards a more classic ‘rock’ sound, something Patrick pulls off perfectly.

But for all its feel good whimsy Baby Comes Home meanders too often into mundane, after-dinner, jazz pop. Tracks like Until You Said I’m Gone and Days Without Rain are nice enough but ultimately forgettable. Unfortunately this is the overriding feeling when you reach the end of the album, you know you’ve heard something pleasant in the last half an hour you just won’t be able to remember what it is.

For all its quick sparks of originality Baby Comes Home never really takes off in the way it should. Perhaps in future it would be wise to pay closer attention to the album cover, who knows, a little more gangsta-rap next time might just do the trick.