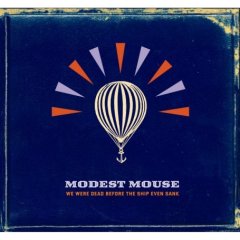 Modest Mouse – We Were Dead Before The Ship Even Sank

The opening double-header of “March Into The Sea” and “Dashboard” lets you know exactly where this latest studio-album is heading. The first is classic Modest Mouse with Isaac Brock doing his Frank Black screamy/whispery thing over thunderous drums and winding guitars, meanwhile lead single “Dashboard” has all of the above but adds a fantastically addictive orchestra-based chorus that means it could well worry the charts. That this album has recently entered the US Billboard charts at No.1 could also confirm the new commercial direction of the band (although it could just be yet another sign of the album sales decline in North America).

What’s brilliant about this record though is that it feels like the Modest Mouse we know and love have finally felt comfortable enough to include the massive sing-along choruses that they seem to have always wanted to.

“Florida” in particular, is so instantly catchy that you could have sworn it was on one of their last albums. That it wasn’t, and that it gets better and better every time, only goes to show that it’s possibly one of the greatest things they’ve ever done. Also stunningly great is the Shins-style “Missed The Boat” which is easily better than anything on that band’s recent “Wincing The Night Away”. Ok, the inclusion of The Shins’ James Mercer on backing vocals was never going to hurt the track, but who the hell could have thought that Modest Mouse could do brilliantly jangly summer pop as well as the New Mexicans?

The eight-and-a-half minute “Spitting Venom” would make the perfect album ending but maybe having an epic as the closing track would be a bit to obvious for Modest Mouse, and so they instead generously treat us to another couple of highlights in “People As Places As People” and “Invisible”.

This will inevitably be remembered as the band’s first album to feature ex-Smiths legend Johnny Marr and largely the addition works brilliantly.
Although his guitar solo in “Fire It Up” turns the otherwise excellent tune into standard U2 stadium rock, he more than redeems himself on “Invisible” with his ever-current guitar flying off at ridiculous angles, just straining to get away from him, and by doing so he’s transformed the track into one of the band’s future live favourites.

Although the same niggles are here as on the last few albums (the bloated 62 minute running time, one too many tracks needlessly included – “Education”, “Steam Engenius”) and the album does lag in the middle before the storming last three tracks, but the beautifully subtlety of “Little Motel” alone is enough to ensure that this will go down as yet another great album from one of America’s very finest bands.