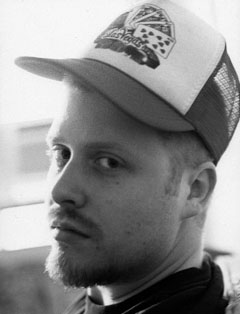 When a rare opportunity finally arises to witness the highest calibre of hip hop of the modern era, you have to grasp it with both hands and savour the fleeting moment.
Such was the requirement when news spread that Definitive Jux head honcho, El-P, had decided to bring his live show north of London to Leeds very own Faversham.
With the Leeds and London dates his only two UK appearances on an extensive European tour supporting new album, ‘I’ll Sleep When You’re Dead’ , the anticipation for El-P was clearly palpable. Especially when you consider that confirmation of the gig was belied by a cloud of uncertainty and confusion for several weeks due to ‘clerical misunderstandings.’
And so with no more than 300 people squeezed tightly together the prior anticipation felt by many for so long refined itself into a collective nervous energy that erupted quite violently when El-Producto jumped straight into Tasmanian Pain Coaster.
The crowd valiantly attempted to throw verses right back at El but had to settle for the more obtainable chorus and odd vocal hook as the man’s flow was simply too fast and intricate to keep up with.
Joined by DJ Mr. Dibbs and another Def Jux Jukie, El-P – dressed in an orange prison jumpsuit – is just as intense live as on record: the murky grooves and synth heavy industrial effects provide the droney backdrop to the wordsmith’s smart dystopian beat poetry.
And when he wasn’t running lyrical laps around the crowd’s heads with the grinding Smithereens or inciting a mosh pit with a sick performance of Deep Space 9mm El-P couldn’t resist but let the people know his two cents. The room listened intently as El vented his ill feelings on military recruitment tactics and the superficiality of cocaine culture, before channelling his anger/frustration/dismay into what he does best: songs. Emotionally driven versions of Up All Night and The League of Extraordinary Nobodies followed with a legitimate authenticity that couldn’t be questioned.
It wasn’t all cynical geo-political seriousness or soapbox rhapsodies though as El-P brought the fun just as much as the pain. The clattering old-school funk of Everything Must Go (EMG) may have sounded sludgy over the Faversham’s PA but no amount of technical shortcomings could dampen the astonished, crazy response that met Mr. Dibbs when he dropped the beat from Company Flow classic, Vital Nerve, into the final section of EMG.
As the bouncing throng shouted Vital Nerve’s lyrics back at him the smile on El-P’s face was genuine as you could tell he was truly touched that a crowd made up of mainly 20-odd year olds were reciting lines conceived in Queens, New York over a decade ago.
An encore of Fantastic Damage songs (Stepfather Factory & Tuned Mass Damper) rubber stamped the feeling that it was truly a privilege to witness a real hip hop pioneer who lends the growingly insipid genre a whole range of lyrical and musical dynamics that just don’t exist in hip hop today.
By John Thornton