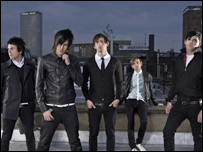 Rock’s/ Ponty’s biggest Duran Duran fans croon their way in with “4am Forever”. Like most of Lost Prophets’ tunes, it will probably sound much better in a random club on a Saturday night, surrounded by similarly over styled revellers, than at home on C.D. as it comes packed with the kind of “Big” chorus that has earned Lost Prophets such a huge following.

But still, there is still no denying that too much of Ian Watkins’ nasally lip trebling verse, can start to grate and for all his impassioned cries (“I wonder if my heart will never mend”), this track still manages to leave me cold. After two albums worth of fame chasing and having failed to crack America in the way in which then planned with latest album “Liberation Transmission”. Maybe it is time for the boys to go back to their roots (minus the god awful rapping).

It appears hope is one the horizon. Claiming to have gotten the pop vibes out of their system, the band say they are now moving on to something “darker” and “nastier” with some “old school” vibes. Which is, of course all just gas until they put it to wax, but maybe the boys are finally heading to a place where we can start to get on again.