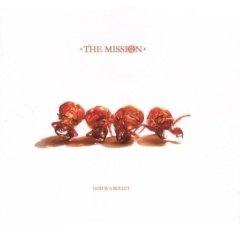 The Mission – God is a Bullet

Dark, brooding and dense, this album is the antithesis of all that annoying happy-go-lucky indie pop in the charts at the minute (yes I’m looking at you Lavigne). But then, what else would you expect from a band who’ve been exploring the darkness for over 20 years?

Opener ‘Still Deep Waters’, glides into my consciousness like the snake from Eden, poisonous yet charming, soothing but sharp. ‘You’re the needle in my vein, the drug that numbs the pain’, croons Wayne Hussey, in a voice that’s part Trent Reznor, part ‘the oldest goth in the world’ Robert Smith. But don’t be fooled into thinking that this album is simply quietly atmospheric – in fact, it can definitely be classified as A Guitar Album. Like Jane’s Addiction’s ‘Strays’, ‘God is a Bullet’ builds its personality on melodies and clean riffs, letting the vocals give all the passion and pain.

Yet this isn’t to say that each song is deep and gloomy – second tune ‘Keep It In The Family’ is far too jolly for a band of this age and experience, and ‘Belladonna’ seems to lift its intro almost directly from ‘Work’ by Jimmy Eat World. However, when the music is somewhat more upbeat than you might expect, the lyrics take on an even darker aspect, as if they’re trying to lull you into a false sense of security with some bouncy rhythms then drag you into depression.

Having said that, ‘Father’ is an emotional lamentation, twisting harmonies and melodies around each other, resulting in a song that is more beautiful than creepy. The problem is, the album is way too easy to have as background music, and the songs are so similar they would be indistinguishable to the average listening ear. This, then, is one for the hardcore fans, or for those really wanting to give the band a chance. If you aren’t that bothered, you won’t really like it, but if you love this band, you’ll love this album.