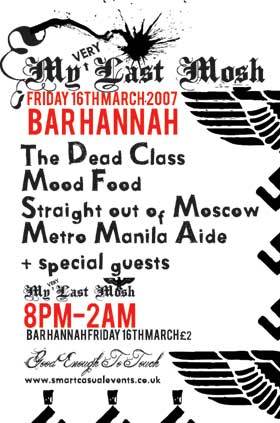 ‘My Very Last Mosh’ begins with what would seem a mistake – a slow moving, building in small steps song ‘Knee deep’. Abstract noises flow and you feel it should have had a more explosive, faster paced beginning-but remember: this isn’t an album, where you have to consider how the songs combine and interact-it’s merely an introduction to these bands and their respective sounds & ideas.

With it’s Morrison style monologue and new age sounds ‘Knee deep’ draws you in but like Morrison’s ‘American prayer’ feels as though it was recorded with the band absent and subsequently it feels slightly disjoined. Midway through it starts to feel stretched and a drum melody simply sounds too complex and at odds with the free and unrestrained feel already established by previous instrumentation – the whole tune does resolve itself well at the end with movement that should have been brought in earlier, it’s an original song and serves well to bookend the whole CD and serves as an interesting view into Mood Food’s world.

Collapsing punk folds into the bass funk of Straight out of Moscow’s ‘Rhythm Bus’-of course comparisons to the Red hot chilli peppers are inevitable but it feels forced and slightly contrived some moments serve to only show how clever they can be, and really they are times when SOOM take their eye off the cosmic ball and drift, but when they lock at several points it is very good-concentration and focus could make these a fantastic live band as the musicality hinted at here shows plenty of scope.
There are some low moments served up here as well though with Dead class’s ‘My machine’ proving to be an uninteresting sonic diversion into the ‘The’ bands lively pop/rock forum.

Metro Manila Aide have produced better material than ‘Fantasia’ shown here, and it’s a shame because they could have presented themselves better ‘The Plague Pt.2’ perhaps? ‘Concrete teeth on an ivory ground’ perfectly encapsulates their sound but similarly a further sound bite ‘Some things are best left forgotten’ probably better explains this track.

The real gold to be mined here is Colombia’s ‘Late Shift’ – Killing Joke comparisons abound, it’s thick with sweat and anger, rumbling along with a solid determination that means you don’t necessarily listen you simply survive the song. Displaying the weight and conviction to pull off heavy music Colombia are assured of more listeners and fans at their next gig.
The fact that any one of these bands could be seen at several venues and for the price of a pint in most cases is fantastic for the local music scene -and if you haven’t seen at least one of them you should really get out more.