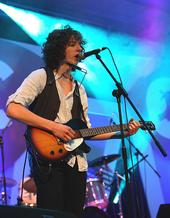 For the uninitiated going to a concert in North Wales does resemble the horror that was the school disco many moons ago. On entering the venue your eyes quickly lock onto a creature simply known as the teenager, then as you pan around the room you realise that there are far more of them than should be allowed in one place at any one time. The problem for any young live band in this part of the world is that practically every venue they roll up at is filled with kids whose primary goal is to drink as many as four Smirnoff Ice’s before throwing up outside.

Cowbois Rhos Botwnog are true superstars of the future with the kind of reckless energy that is rare in Welsh music. Their formula seems a simple one with every song driven to create a live frenzy, something that should go over well outside of Wales with the so-called language barrier being dismantled by that true feeling of rock and roll. They get to the stage and begin the ho-down (and I’m not talking about the activities of one of P-Diddy’s ladies) ‘rock-tacular’ they have become much admired for. Their debut album is finally out and they give a full on sample of what your getting should you be wise enough to invest. The kids seem half interested in the band and half interested in buying more cheap alcohol before they are forced home to the realm of the parents. The band leaves nothing to spare and deliver a show that would surely convince any doubter that they could go far.

Personally I feel sorry for so many young bands that are stuck in Wales performing to a gaggle of chavs out for a leathering session. It would be fantastic to see a showcase of such talent unleashed in a more demanding environment that allows for the drunken chav but primarily is there for the moshing indie kids. I have no idea if the Cowbois plan to release any English material in the future but it’s of little concern as they have rock buried deep in their soul and the essence of Deliverence pumping out of their banjos, get ready to squeal and submit.