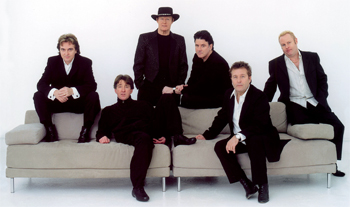 The Hollies encapsulated the 60’s and 70’s with their melodic anthems that influenced many bands that followed.

With a chilly North Easterly breeze blowing straight in from the sea, it was a relief to get inside this good old fashioned seaside theatre, the perfect setting for music from the 60s and 70s.

The place was brought to life from the very start with the fabulous lighting and stage effects. The Hollies as ever were brilliant during a 2 hour 20 minutes show, with an updated version of ‘ Just One Look’ and Peter Howarth’s solo version of ‘Here I go again’, was well worth the 1 ½ hour trip from home. All the old favourites were there, with songs from their last album Staying Power in there also.

Ray Stiles (ex Mud) had members of the audience up front dancing to Tiger Feet. An appearance by Sir Jimmy Saville as a ghost of the old theatre brought laughs from the audience. An emotional rendition of ‘He ain’t heavy, he’s my brother’ before the encore brought the evening to a close.

60s and 70s music doesn’t get much better than this, and the 5 minute standing ovation at the end of the show, meant that a lot of people agreed. We look forward for the next tour date to be announced.