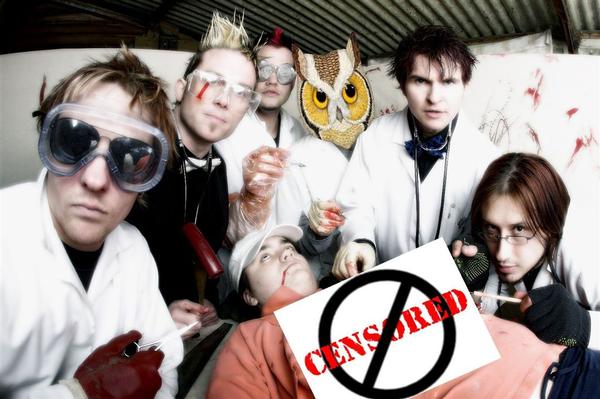 Belisha walk out on stage to a thirty foot high video backdrop. Teams of white coated techies dismount upon their arrival, their work is temporarily over. The stage has been set behind a veil of darkness. They have taken a leaf out of Tool’s stage show, the intro video is awesome, talk about a USP!

Magic tricks, pyrotechnics, light shows and video clips, Belisha are the band one step ahead of the rest.

The Outbreak festival is about catching the bands that are, quite simply, about to break – It was the same two years ago with Arctic Monkeys. Despite the main attractions actually being bands past their peak (sorry 80’s), Outbreak 3 has enough shows to have a few hidden gems in there and Belisha are just that. Likened to a venus fly trap – sweet, cute and cheeky – get too close and the little guys (excluding the huge guy on stilts) will rip your head off. If you don’t do it to yourself in the pit first, that is. Clued up but screwed up, like Hannibal Lecter, the most dangerous kind of serial killer – the educated lunatic.

Ten Reasons to Live storm through a cheese riddled set of of classic rock, rock n roll, punk rock and rock ballads. Ten Reasons have them all. What they don’t have tonight is their rhythm guitarist who is absent because the birth of his first child. It shows some things are more important than music; how touching.

The cheeky chappies are the scouse Towers of London that you can take home to your mum but you’d think twice because she might not be able to help herself. If anything they have the look you can market to half the nation – the female half! Well, its the old adage – the boys wanna be them and the girls wanna f**k them. Hey it could be worse, they could sound more like U2 and act more like the Towers Of London.