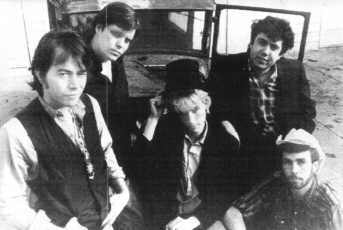 Is this country music? If it is it’s a very poor, war torn country, where the government has decreed that there will be only one band and this is it. Anyone else found playing will have their strings chopped off. Or is it dem blues? Well it gives my poor ears dem at times.

It’s such a shame when vocalists utterly ruin music. I can imagine the band playing behind this singer, working out how they are going to kill him, thus releasing them from these career threatening contracts. Some of the instrumentation is nothing short of sensational – really spellbinding retrospective rock that takes you back to the fields of Woodstock (or how you feel it must have looked to grown ups who actually went) and the glades of Glastonbury (or how you feel it would have looked if you were conscious for any of it).

I love the music of Green on Red, but until they take off those ridiculous, self indulgent, whining, purposefully out of tune, post ironic, karaoke vocals, I refuse to listen. It’s like graffitiing over a Picasso, or putting a chastity belt on Kelly Brooks’ muffin. It’s one thing when music is bad but it’s much worse when good music is ruined by one rogue element. That’s just annoying.

In my imaginary (and far superior) world, there would be (largely female) music doctors who, after examining Green on Red thoroughly, would conclude that the singer has had a long term psychosis about his voice being rubbish and has therefore reverted to singing sarcastically to remove himself from any serious criticism. The delectable doctress would then prescribe rest to the singer and a new singer to the band.

But come now, let us rejoice in all that’s good about those guitars…..