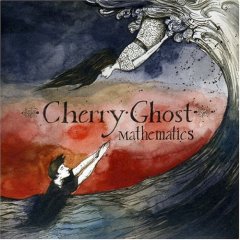 The new Coldplay? Well the title certainly fits in with Chris Martin’s formula obsessed workings. But no, not here, this is far more understated than Coldplay’s stadium intentions and not a bad first effort from Cherry Ghost. A string laden lament which grows more poignant with repeated listening.

Not quite the “Crashing Beauty from a sweet apparition”, they describe themselves as, but an earnest, polite if rather repetitive run through of rich baritone vocals and withheld guitars that sadly pack all the punch of a B-side from The Thrills.

Quibbles aside, this is a promising debut, epic in the drawn-out manner of the latter day Verve, but without the overkill of say, the new Arcade Fire album. Not enough to demand our attention just yet, but with a little more fire in their hearts, Cherry Ghost could certainly be ones to watch out for in the not too distant future.