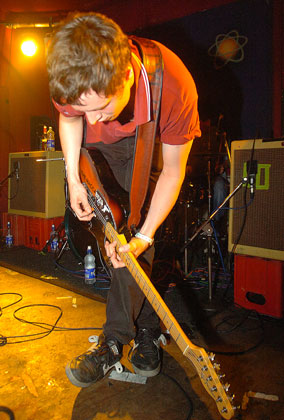 Brighton’s own very Peggy Sue and the Pirates open tonight, the second date of two hometown gigs The Maccabees are playing in quick succession.

Fresh from a recent tour with Kate Nash, Peggy Sue deliver a set that reflects how much promise there is in their songs. It would be unfair to put them into the same scene as many of the other bands / artists coming through in the UK right now as they do have much to offer than just being part of a scene. Competent vocals lay themselves over a stripped musical bed of an acoustic guitar and at times it does seem like they have taken the very best of New York style anti folk, added smooth vocals and given it a UK slant.

The Rumble Strips follow and for the masses they are a more digestible proposition. Their music uses a simple formula and is one that is easy to both understand and swallow. Take a straightforward successful guitar band like Razorlight, add saxophones and a hint of Ska and bang, in a puff of smoke appears a band that has mass appeal and is just slightly different enough to gain peoples attention. This band will be huge, chances are they will be plastered across TV, radio and the press in the coming months but for these ears they are maybe a bit too bland and predictable.

Which leads us onto the nights headliners The Maccabees who literally have the audience eating out of their hands from the beginning of ‘Bright Young Things’ to the end of closer ‘First Love’.
Tonight is the second of two headline appearances here and understandably the venue is full of people eager to see and hear just what this band has to show to their adopted hometown.
Since the release of first single ‘X-ray’ back in late 2005 they have organically grown as a band, the early promise that they showed has been realised. They have become more assured, their already tight live show has become more streamlined, while their sound has developed and is now more expansive dynamically.

The Futureheads and Maximo Park comparisons that were to be found once too commonly are now gone for The Maccabees have evolved and matured into a band that has cultivated its own identity and sound. They are no longer the one trick pony that they once where, the jagged guitar lines that weave around themselves around each other and the call and response vocals of Orlando and Hugo can still be found in such gems as ‘Latchmere’. Which when played gets the audience frothing at the mouth when the opening riff begins. ‘X-ray’ gets a similar response and it’s in these fast paced songs that it becomes apparent how deeply some people have taken this band into their hearts. Orlando’s lyrics concerning tales of young love have really connected with a lot of people here with some singing along to ‘About You Dress’. The Maccabees are not your typical indie led guitar pop band and they have songs that can cross over and be adored by all, from the skinny teenage indie kid to the middle class 30 something and beyond.