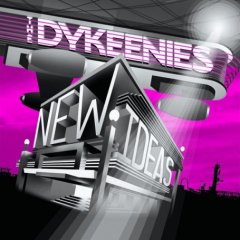 The re-release of The Dykeenies first single New Ideas is as good as it was first time round, mainly because it is the exact same song! But it still sounds as good as it did then.

Opening with the bizarrely repeated line ‘silence is golden’, it contains many twists and turns, pounding drums, sweet vocals and lots of guitars. ‘I’ve got a wealth of new ideas/I’ve got so many new ideas’ cries lead singer Brian Henderson to constant backing vocals of show me all your new ideas. It sounds as though The Dykeenies have taken many of theses new ideas and crammed them all into this three minutes and five seconds long song.

This is defiantly a tune full of fun, proving this is a band that does not take themselves too seriously. Instead they appear intent on sharing the fun by making you want to dance insanely shouting at the top of your voice about all these ‘new ideas’.