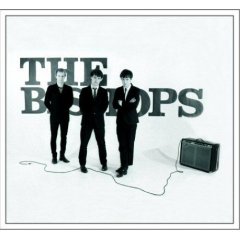 The Bishops are a band, hailing from London, and despite what you might think with their attire, haircuts and, most importantly, their music, they’re actually brand spanking new. But are they any good?

The three-piece have struck lucky from the get-go, by managing to get Liam Watson, man behind the dials of The White Stripes most popular effort “Elephant”, on board, but sadly for The Bishops they’re never likely to achieve the success Jack & Meg have. And, if you’re looking for the most obvious, stone cold reason, it’s because they’re unoriginal, unexciting and the whole album just plods along.

Of course, its not very offensive, no, it’s too ‘1960’s’ to be offensive. The Bishops are trying with every aesthetic thinkable to replicate the heydays of The Beatles and The Rolling Stones and although at some points it’s not half bad, it’s very, for the want of a better word, cheesy. Some tracks are good, but they’re scattered around the album and the surrounding tracks are just plain bad. The vocal harmonies are in place, but they’re in the wrong place, because it’s 2007, and analogue has no place in this century, maybe not yet anyway. The arrangements of the guitars and drums are so damn familiar; if they were lyrics you’d already know the words before the song had finished playing.

The Bishops might get you moving sometimes, but it just sounds too old, ‘Rock ‘N’ Roll’ has evolved past that. In fact, The Beatles themselves evolved past it during their reign. Luckily their debut is short, clocking in at just over 30 minutes, meaning some folk might actually be able to stick with it with it for the albums entirely, and might learn to like it.

But the fact remains that The Bishops are simply paying homage to The Beatles, and sometimes they’re just stealing ideas wholesale. They might actually be some untapped talent here, but perhaps efforts of the band members could be directed to something with more potential.