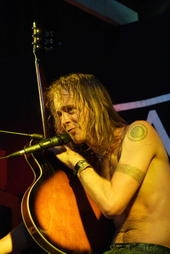 Who’s this Hick? Shoeless, baseball capped drunk, stomping on a kick pedal with his right foot and on a row of organ bass pedals with his left. It’s taken ten minutes to get a beat going. I think I’ll go now, “Wait,” she says…

Mayor McCa is a hip hop catastrophe, the undiscovered diabolical genius. He battles with a drum, bass, oboe, kazoo, guitar, harmonica, tap shoes (yes!), keyboard and others (don’t want to spoil it)

The uncensored self-confessed crack addict isn’t fond of cocaine or hay fever. A hip-hop cross over that isn’t quite right. The first three songs pass in a drunken mess, to think I almost walked out on the barefooted hillbilly. When he does play a ‘sensitive love song’ (as he puts it) which is about NOT falling in love, it is interrupted by a rant at a rude blonde girl.

Once your own sensibilities have been offended and you become metaphorically stoned, into not caring, you realise Mayor McCa is an entertainer more so than a musician. Hooray to us, we got the point…eventually. The more pissed the better. Rock on!

If you have the patience to listen to Jamie Woon construct his layered soundscapes he can provide you with the perfect remedy for a Sunday, or any day for that matter. Enchanting and ambient providing a backdrop of mellow tones softly spoken tender pop songs to chill your bones. Spellbinding choral effects from the line 6 pedal in his lap.