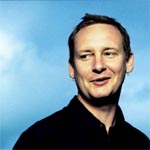 So what happens when two legends of the music world collide?

The new track from Paul Hartnoll (The Orbital) features Robert Smith (The Cure) on vocals so I was curious as I loaded the CD into my stereo to see what the result would be.

The track starts well enough with a polite electronic tune worthy of Hot Chip but when the vocals fall over the top of it everything starts going wrong, Robert Smith’s voice seeming foreign and completely unwelcome as it clashes against the down tempo dance style.

If it was pulled apart this track may work but as it stands it comes across as an un-necessary remix of The Cure.

Little of the expansive remix package fares any better, exciting new artists like Static and The Whip struggle to turn in a decent effort after being confronted with a task that could probably be compared to polishing a turd, the only exception is the Culprit 1 remix which brings in a slight rock element and beefs up the production to find a sound that complements the vocals.