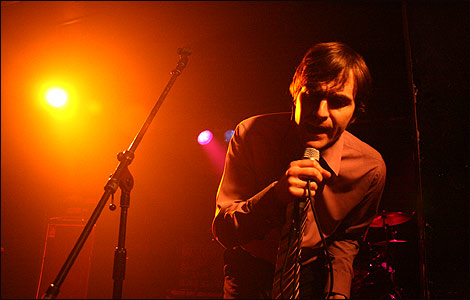 The Bluetones are back on the big stage. A packed out sold-out Koko and delectable support from the luscious Hot Puppies. I surmise there are four types of people here: 1) Die hard fans, 2) those who came with the die hard fans, 3) word of mouth people who came because they heard the show would be good on Friday in Koko and just like to go to gigs and 4) those who just know the first Bluetones album; this is just where I fit in.

The old songs are better received than the new ones yet for those of us who haven’t followed Mark Morriss and his band through the years of progression from Expecting To Fly, it is apparent in the use of keyboard and greater range in dynamics, from sorrowful ballads to heavier driving rock tunes is more than you would expect to have missed. From our vantage point we can make out the first five or so rows singing along to every word of every song. These are the die hard fans who have followed The Bluetones through their career.

Then it’s all into the Purple Turtle to catch the end of Ross Copperman’s set at Club Glasswerk. The soft singing pop crooner covered Lily Allen’s ‘Smile’ which was well received if a little crass like, ‘when in Rome…’ but the level of talent is great to see even if pop music sucks ass. This guy is going to be huge, like Godzilla. God help us!

“Now for something completely different.” In complete contrast, as is often the way with Club Glasswerk, this was followed by a stonking new rave set by U R Penetrators who are more like shouty dance than new rave but it’s a fine line we shan’t dwell upon. Uplifting, powerful and energising fantastic dance.

This is followed by headliners of the night 586 who get everybody dancing mainly because everybody is drunk. Then it’s a quick dart back into Koko which in the short space of time has been transformed into club NME, for a quick chat with Neil’s Children before finishing the night with another drink in the Purple Turtle before closing time and fast food which is beyond recollection and suspect as to whether it actually happened. Could my money have been spent on ‘invisible’ food, the new craze sweeping the size zero catwalk generation? Beware drunks!

*The proximity of the venues on Camden Road means with the right planning and the right handstamps/wristbands being at more than one gig is entirely possible, if unaffordable. With this strategy, no drinking is advised. It’s a small world and a lonely planet people.